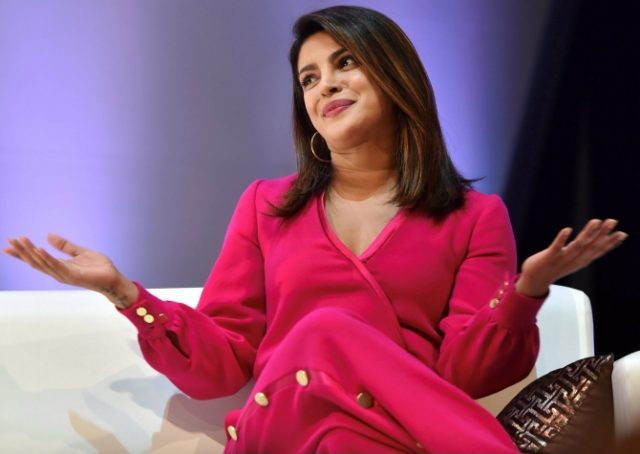 The furious Hindu extremist groups demand Priyanka Chopra to be sent to Pakistan .The Bollywood diva is under constant verbal attacks from her fellow Indians, since the release of the latest episode of Hollywood series, Quantico, which sparked outrage in India. The protestors have labeled Priyanka Chopra, a ‘traitor’.

The latest episode of Quantico, has reported to offend the sentiments of the Indians and Hindus. The episode depicted Priyanka Chopra – an FBI agent in the series – uncovering a Hindu nationalist, not a Pakistani man, behind a terror plot planned ahead of the summit to be held in Indian-Occupied Kashmir.

The episode aired on June 1 and showed a group of Indians planning a terror attack in Manhattan with the intention of blaming it on Pakistan. An MIT professor acquires uranium to create a nuclear bomb. His main target is New York, where the Indo-Pak summit is to be held.

Calls have been made to boycott the works and brands she has endorsed.

The protestors are holding tight to the controversy despite the apologies issued from the TV channel ABC, the producers and the actress herself. Priyanka Chopra, in her recent Twitter post, issued an apology and reiterated her sincerities towards her country – India.

Protestors were seen carrying a placard that said, “Priyanka Chopra is a traitor, send her to Pakistan.” A member from the group of Shiv Sena accused the actress of degrading India. He was outrage by how the show was, “degrading Hindus as terrorists and saying India sponsors terror to ‘frame’ Pakistan.”

Read more : Priyanka Chopra reveals how abuse of power in Bollywood held her back

Calls have been made to boycott the works and brands she has endorsed.

the UN goodwill ambassador has stooped to such lows to gain a few dollars and some fame and a desperate attempt to fit in international circle(s). itis utterly shameful and disgraceful,” the document goes on to read.

“Started her career by crying foul about being ill-treated and being a victim of racism in the United States, Priyanka Chopra used a derogatory reference to India and Hindus in her American series, Quantico,” a statement by the group read.

“A woman, who is a daughter of an Indian Army officer, who got a chance to represent India and was crowned Miss World, is a Bollywood actor and part of other national and international humanitarian projects as well as the UN goodwill ambassador has stooped to such lows to gain a few dollars and some fame and a desperate attempt to fit in international circle(s). itis utterly shameful and disgraceful,” the document goes on to read.

Last month, Priyanka Chopra was grilled on social media by the radical Hindu organization for visiting Rohingyas refugee camps in Bangladesh. Chopra visited them as a UNICEF ambassador, however, her detractors believe she should look after her people first.

Shahid Afridi demands land for a cricket academy in Karachi