India & Pakistan: Can Cricket and Peace go together? 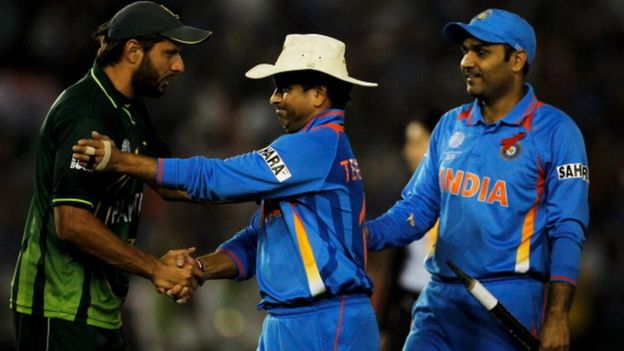 Much to the dismay of diehard cricket fans, Pakistan and India will not face each other in a bilateral series for an unforeseeable future. In a categorical statement, Sports minister of the BJP-led government said that cricket between the two is not possible amid the current scenario.

BCCI should talk to government first before giving any proposal. Bilateral series in the current situation is not possible,” the Sports Minister said on the day when BCCI-PCB met  in Dubai to discuss bilateral ties.

As tensions between the two countries acclerate on a daily basis to dangerous levels, such a response was expected and in-line with India’s rhetoric against Pakistan. This makes the upcoming Indo Pak fixture in the Champion Trophy a high voltage clash.  It must be noted that Pakistan and India do play each other in multi-national tournaments organized by the International Cricket Council (ICC) or the Asian Cricket Council for that matter.

read more: India’s design for Pakistani cricket is a failure of Pakistani foreign…

Earlier, a three member delegation of the Pakistan Cricket Board (PCB) met officials of the Board of Control for Cricket in India (BCCI).

Chairman PCB Shehryar Khan, who has also had a distinguished career as a diplomat, remarked about the meeting in an interview with Geo TV.

“It was in good spirits, but there has been no progress. We heard and understood each other’s viewpoints, we knew what their legal standing was, and they knew ours,” he said.

He added that India has not shown flexibility and the willingness to compensate Pakistan for the cancellations of its tours to Pakistan.

It must be recalled that India has not toured Pakistan for a bilateral series since 2006, when it played three test and five limited overs matches. Pakistan however played a full fledged test and ODI series in 2007 in India, followed by a short limited overs tours in 2013.

Shehryar Khan added that India has not shown flexibility and the willingness to compensate Pakistan for the cancellations of its tours to Pakistan.

India on the other hand have snubbed bilateral series even on neutral venues. BCCI had  signed a Memorandum of Understanding with the PCB in 2014 under which they were due to play six series – four to be hosted by Pakistan – between 2015 and 2023. However, clearance was denied on political grounds.

Pakistan Super League Chairman Najam Sethi said that if the meeting was not fruitful then more meetings would be held. “India should compensate for refusing to play the bilateral series. If Indian cricket board does not budge then the matter will be taken to International Cricket Council (ICC),” he added.

read more: Misbah Ul Haq: a man who gave what he had

Cricket : No longer a potent tool of diplomacy

Cricket is enamored by the people of both countries. The Indo-Pak rivalry is deemed as the most fierce of all showdowns and is an aficionados delight. Both countries have produced legends and have been involved in some epic encounters. India is a powerhouse in cricket due to its improvements in performances and financial resources. While, the gap between victories is lessening, it is still in Pakistan’s favor due to its past dominance. However, playing cricket with Pakistan is not a priority for the Indian government and the board for that matter.

The love of the game has been used many times as a diplomatic tool to bring about a thaw in ties. The highly-touted cricket diplomacy was used by Pakistan during General Zia’s time. General Zia went to witness matches between the two when both were on the cusp of a clash owing to a huge military exercise codenamed “brasstacks”.

During the volatile situation in 1999 Pakistan did a full tour of India. This was followed by General Musharraf’s visit for the fifth ODI at Delhi on the 17th of April 2005. Both him and Prime minister Manmohan Singh had a fruitful meeting. Again, the two leaders in Prime Ministers Gillani and Manmohan Singh met on the fringes of the semi final clash  of the 2011 World Cup in Mohali, India.

However, these efforts did little to alter ties at all levels. But, with the rise in Armageddon cricket is least likely to be an effective diplomatic tool now. Peace is a requisite for healthy cricketing relations. Recrimination, troop build-up and skirmishes on the borders do not create an ideal environment for strong bilateral cricket ties between the two arch-rivals.