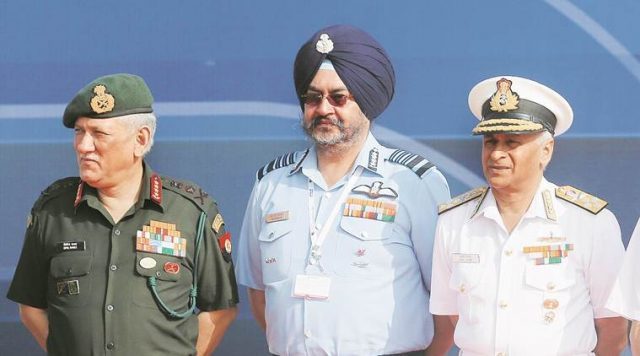 New Delhi has taken a significant step towards enmeshing the Indian Armed Forces-the Indian Air Force, the Army, and the Navy-under a unified or “integrated” theatre of command. Top government sources say that new “statutory rules and orders” have been notified by New Delhi to ensure ‘seamless efficacy’ and efficient use of resources.

The term ‘theatre’ in the military parlance refers to an area or place where important military events may occur. For example, theatre of operations (TO) means a sub-area within a larger theatre of war. Theatre of command simply implies the command structure of the Armed Forces carrying out operations in the TO. Such a command may include troops from different services i.e. Air Force, Army or Navy. It’s not so much the type of force, but the geography of the area in the context of security threats that the term ‘theatre’ is usually used to define.

Having an integrated theatre of command implies that the Indian Armed Forces will now be under the command of a single three-star general, who will be able to control and discipline contingents from all three wings of the Indian Armed Forces, namely, the air force, army, and navy. In other words, there will be one leader for all Indian troops. At the moment, the Armed Forces of India have a total of 17 commands. The Army and the Air Force each have 7 commands under them while the Nay has 3. Each command is headed by a 4-star rank military officer. Under a single or ‘integrated’ theatre of command, there might be a total of no more than 3 commands: a Western one with its force potential towards Pakistan, an Eastern one for China and a Southern command for the wider Indian Ocean Region. Total troops in the Indian Armed Forces are said to be more than 1.3 million, with a budget of $62.8 billion.

There have been at least a couple of attempts to unify the command of the Indian Armed Forces before. In October, the Andman Nicobar Command (ANC) was established as India’s first theatre command. However, it has remained ineffectual due to politico-bureaucratic inertia, leg pulling, turf wars between the various Armed Forces of India, lack of funds and apathy in general.  Similarly, the Strategic Forces Command (SFC) of India is responsible for managing strategic and tactical nuclear warheads. Both these “tri-services” commands are headed by an officer at the three-star rank from all three armed services of India on a rotational basis. Currently, the Commander-in-Chief of the ANC is a Vice Admiral from the Indian Navy and the SFC is headed by a Lt. General from the Army.

Read more: Diplomatic harassment in India and anti-Muslim rhetoric may prove to be…

There have been calls for having an integrated theatre of command before in India. A report by Vijai Singh Rana, a research fellow at the IDSA (Institute for Defense Studies and Analyses), presents a case for ‘Unified Commands’ to enhance jointness in the Indian Armed Forces. Jointness refers to the capability or the Army, Navy and Air Force to cooperate in joint operations during war. Similarly, former Chief of Staff of the Indian Army, General Deepak Kapoor, has also argued that there is a need for integrated theatre command in the Indian military. Kapoor says that the Indian Army was an inheritance from the British Empire and needs a major overhaul for it to become a truly modern armed force. And most significantly, the Prime Minister of India, Narenda Modi, has also been vocal about the lack of coordination among the different services in India. Presiding over a Combined Commanders Conference in 2015, Modi said, “We have been slow to reform the structures of our armed forces… We should promote jointness across every level of our armed forces.”

Theatres of command under a single leadership, the argument goes, will allow for efficient allocation of resources, reduce troop numbers, where the numbers are unnecessary, and allow faster movement of assets where required. Both the US and China have integrated theatres of command. The American command is global in scope whereas China has organized its 2.3 million strong armed forces into five theatre commands. One of the theatres the Chinese military focuses upon is the 4000-kilometer long Indo-China border.

However, it is doubtful such a measure will go a long way to eliminate all the long-standing problems that the Indian Military has been suffering from. There have been cases of Indian troops deserting the Indian Army and crossing over to the Pakistani side. Other major lapses have also been discovered in how procurement of weapons is frequently delayed. It takes 120 weeks to clear files. Corruption also adds another dimension to the problem. Consequently, the Army’s ammunition won’t last for more than 10 to 20 days of the war.

Race is on for PTI Muzzafargarh candidate

Maryam Nawaz get hits by her own security guard outside IHC