Washington is hoping to fasten India firmly to its ‘Indo-Pacific vision’ while also pushing India to pull back its military partnership with Russia. 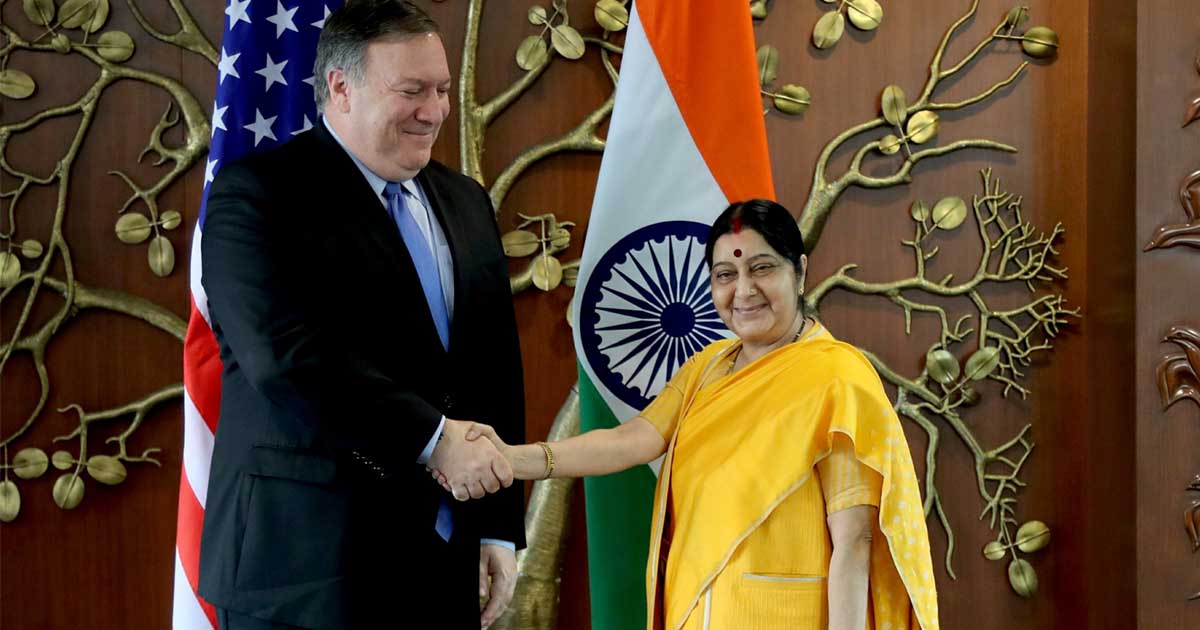 The Indian analysts view US Secretary of State Michael Pompeo’s forthcoming visit to New Delhi early next week through the looking glass of the ‘tariff war’ between the two countries and/or India’s purchase of the S-400 anti-ballistic missile system from Russia. However, this gives a tunnel vision. The point is, there is the much bigger question of where the defining partnership between the two countries is heading to.

For the US, the trade disputes or India’s S-400 deal with Russia are not just moving parts in a transactional relationship. There is a complex combination involved here. Take trade issues. Without doubt, a long-term perspective is called for, since contradictions are arising not because of any wilful actions but due to the wider changes in the international system as such.

Major historical shifts are taking place in the global power balance and the Western domination of the international system is drawing to a close.

Major historical shifts are taking place in the global power balance and the Western domination of the international system is drawing to a close. Countries such as China and India are steadily reviving, shaking off the stagnation of the colonial era. This is prompting an overall rethink in the US’ attitudes. What is unfolding has parallels in modern history.

Thus, in the case of China, more hardline approaches are already quite visible. We should note carefully the controversial remark made recently by Kiron Skinner, the director of policy planning at the US State Department (and a Harvard-educated foreign affairs specialist), that Pompeo’s team is developing a strategy for China based on the idea of “a fight with a really different civilisation” for the first time in American history.

“This is a fight with a really different civilisation and a different ideology and the United States hasn’t had that before. The Soviet Union and that competition, in a way it was a fight within the Western family,” Skinner said, noting Karl Marx’s indebtedness to Western political ideas. “It’s the first time that we will have a great power competitor that is not Caucasian,” he said.

When it comes to India, however, the paranoia has not reached anywhere near to this point. The US assumption still remains that it is possible to win India’s acquiescence to the so-called liberal international order that came into being in the post-World War 2 era, characterised by a set of rules and institutions in order to legitimise the American dominance of the international order. But the US is getting impatient with India’s perceived ambivalence.

Countries such as China and India are steadily reviving, shaking off the stagnation of the colonial era.

The point is, President Trump’s ‘Make America Great Again’ emanates out of the premise that the surge of countries such as China and India poses formidable challenges to the preservation of the US hegemony. Thus, a more nationalistic and unilateralist US foreign economic and strategic approach has appeared. And India too will come increasingly in the US crosshairs if it insists on maintaining its strategic autonomy.

In this backdrop, two elements in the recent testimony by Alice Wells, the Senior Bureau Official for South and Central Asian Affairs in the US State Department before the House Foreign Affairs Subcommittee for Asia in Washington on June 13 become noteworthy. In her written statement about the US’ Indo-Pacific strategy, Wells said:

“At the same time, the United States, alongside India, Japan, Australia, and other trusted allies and partners, will support the political and economic autonomy of the Indo-Pacific countries to ensure they can chart their own path to freedom and prosperity as satellites to none. We cannot allow China, or any other country, to subvert our partners through unsustainable push economies into unsustainable debt, or by contributing to an erosion of transparency and democratic norms.”

Indeed, this viewpoint is diametrically opposite to what PM Modi had outlined in his landmark keynote address at the Shangri-La Dialogue last June in Singapore where he had said that as far as India is concerned,‘Indo-Pacific’ is not a strategy. Modi instead called for an inclusive approach to regional cooperation where India attributed centrality to the ASEAN.

The Soviet Union and that competition, in a way it was a fight within the Western family,” Skinner said, noting Karl Marx’s indebtedness to Western political ideas.

Furthermore, elsewhere during Wells’ testimony, she also spoke about India-Russia strategic relations. Expressing deep concerns over India’s decision to procure five squadrons of Russian-made S-400 air defense systems, Wells said the purchase could limit burgeoning India-US military relations. She added that the induction of the new long-range air defense systems “effectively could limit India’s ability to increase our own interoperability,” and the US has “serious concerns” about the long-term strategic implications of the purchase for the bilateral ties between the US and India.

Then, came a stunner. Wells said, “At a certain point, a strategic choice has to be made about partnerships and a strategic choice about what weapons systems and platforms a country is going to adopt.” Two things emerge out of Wells’ testimony. First, the US stands in the way of any improvement in India-China ties that is not in conformity with the dynamics of the US-China relations. Second, the US sees Delhi’s S-400 ABM deal with Moscow as an assertion of its strategic autonomy.

Meanwhile, according to reports lately in the Indian press, the US may consider India’s inclusion on the US’ International Traffic in Arms Regulations (ITAR), which would put India on par with America’s NATO allies for the export of high-level military technologies including ballistic missiles, drones, spacecraft systems, nuclear weapons simulation tools, and directed energy weapons, et al. Through such legislation, Washington would hope to fasten India firmly to its ‘Indo-Pacific vision’ while also induce India to roll back its military partnership with Russia.

How safe is Indonesia’s democracy from Islamic extremism?