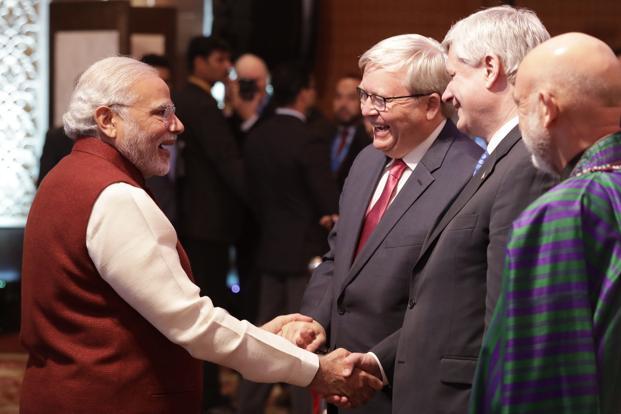 “China is very sensitive on matters concerning its sovereignty,” then he went on to say “we expect they will respect other people’s sovereignty. CPEC passes through a territory that we see as ours. Surely people will understand India’s reaction. There needs to be some reflection and I am sorry to say that we have not seen signs of that,”

India launched the Raisina dialogue last year, as a flagship conference to discuss the country’s strategic issues. It is organized by the Ministry of External Affairs and the Observer Research Foundation, an Indian think tank. The focus of this year’s meeting is new challenges in multi-polarity and cyber security.

These unusually stringent remarks by an Indian foreign secretary, come on the heels of the softer tone taken by Prime Minister Modi a day earlier. PM Modi talked less about differences with China and more about how they could work together only mentioning that “both our countries need to show sensitivity and respect for each other’s core concerns and interests.” This pattern has also been seen in case of Pakistan; PM Modi himself is often restrained and more fire is emitted by his cabinet members.

Now, in this instance, the Indian Foreign Secretary emphasized that the Indian relationship

“With China, the overall broadening of ties, especially in business and people-to-people contacts, has been overshadowed by differences on certain political issues,”  On the South China Sea, he pointedly said, “India stands for freedom of navigation and respect for international laws.” Though India has limited direct stakes in South China Sea, but comments of Foreign Secretary were meant to support the US position against Chinese assertion in South China sea.

A tough 2016 for China and India relations

The relationship between the two countries in 2016 was full of tensions and differences over many issues. China is not happy with the increased closeness between the US and India which is seen as a partnership to block its rise in the pacific region and beyond. A relationship it should be concerned about if recent comments of the U.S. Pacific Command Chief, to the Indian Express, are to be taken at face value.

In addition, last year the Chinese were very upset with India which in April issued visas to Chinese Uyghur nationals, whom China considers terrorists, to visit the exiled Tibetan spiritual leader, the Dalai Lama in Dharamsala. India was forced to revoke these visas later under Chinese pressure.

Closeness of India and US creating regional tensions

Admiral Harry Harris, Commander of the United States Pacific Command, recently disclosed that the US and Indian navies are exchanging information on the movement of Chinese submarines and ships in the Indian Ocean.

He emphasized the importance of the military logistics agreements that the US and India had signed with each other and emphasized that other agreements needed signing if they wanted to further increase close monitoring of Chinese submarines activities in the region.

He was referring to the Communications Compatibility and Security Agreement (COMCASA) and Basic Exchange and Cooperation Agreement (BECA).

He further said, “India views China correctly and we share the same view of China and I think we are in a good place.” He defined influence in a region as a zero sum game saying that the more influence China has that means the less India has. These comments coming from a US naval officer, if correctly reported, are definitely something new.

The Indians have been unhappy with Chinese actions on a number of fronts including what they perceive is China hindering the US attempt to make it a member of the Nuclear Suppliers Group (NSG) group.

It has also blocked India’s attempts to declare the Pakistani Jaish-e-Mohammad (JeM) chief, Masood Azhar as an international terrorist in the UN, whom India believes was behind the Pathankot base attack. Pakistanis complain that India has not provided any evidence to substantiate these allegations.

And, lately, India has been voicing concerns over the CPEC route, on which China and Pakistan are working on together, going through the Gilgit/Baltistan territory, which India claims belongs to it as part of Kashmir. While India, since 1947, always claimed its right on the full territory of the erstwhile princely state of Jammu & Kashmir, for greater part of the past 70 years it showed little interest in areas administered by Pakistan. However in recent years its rhetoric is getting stronger on Gilgit & Baltistan – areas through which CPEC route is now passing, and without which Pakistan and China cannot connect their trade ambitions.

Indians have grown concerned with the fast pace of work being done under the CPEC project. CPEC will enable China to reach the gulf via its western region.

Indians see Chinese naval presence in the warm waters near their territory a threat and are upset over reports that the Chinese are now also engaged with the Pakistanis over a naval cooperation in Gwadar, Baluchistan.

Foreign Secretary comments on the UN

The foreign secretary also took a swipe at the UN, calling it an “absurdity”. “The absurdity of the main multilateral decision-making body being more than 70 years old -and due for retirement anywhere in the world -is obvious to all except those with a vested interest. ” he said.

This is ironic coming from India, that has been asking for the past couple of decades, to be given a permanent seat in the Security council past.  It may be a reflection that India doesn’t see that happening in the near future.

It also reflects India’s dissatisfaction with the UN over its recent condemning of Indian actions in Kashmir in September as well as not achieving their aims in getting Masood Azhar declared a terrorist. Historically, Pakistanis have been crying shrill over the impotence of UN; now apparently Indians have also joined them.

Australia, US, India and Japan attempt to counter China’s OBOR