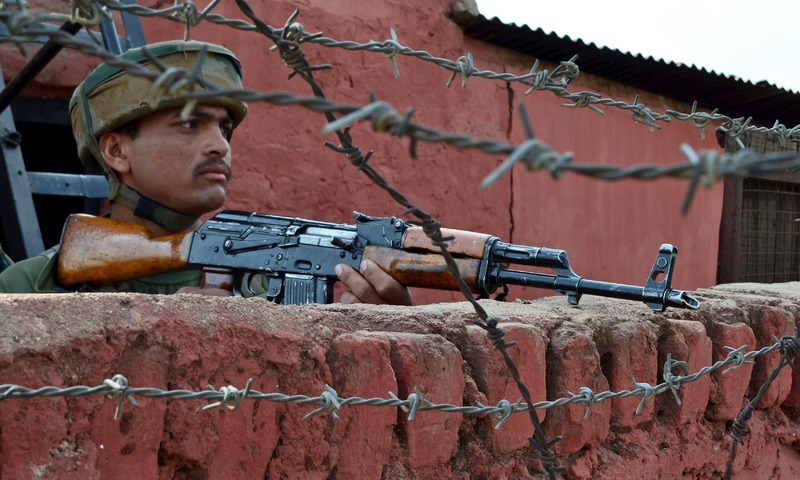 On Saturday, 10 February, separatists attacked an Indian army camp in Jammu in Indian held Kashmir and exchanged fire with soldiers. So far two soldiers have been reported dead and another 4 injured. Two martyred and four injured in the report with me so far,” said Inspector General of Police for Jammu region, S D Singh Jamwal.

This is the second attack on the Sunjwan Military station in 15 years. In 2003, separatists killed nearly a dozen soldiers. Indian media is reporting that around 4-5 people got into the military station from the nullah on one of its sides.

Lok Sabha Assembly speaker Kavinder Gupta attributed the Saturday terror attack to illegal immigrants from two countries,  “I live in that constituency, complaints have come from there & in a way govt also accepts that number of Rohingyas & Bangladeshis is increasing & that they are a security threat.”

On February 5, 2018 (Kashmir Day) the Foreign Office (FO) of Pakistan summoned the Indian Deputy High Commissioner J.P. Singh to protest for unprovoked ceasefire violations along the Line of Control (LOC) by the Indian forces. Nezapir, Nikial and Karela Sectors were attacked by the Indian forces in which two innocent civilians were martyred and seven injured including two children.

“We highly condemn Indian atrocities and brutal acts and call upon world human rights defenders to stand up for Kashmiris in Indian occupied Kashmir (IoK)”,

According to the statement issued by the FO on 5th February,  India committed 1,970 ceasefire violations during  2017 and 190 since the beginning of 2018 along the LOC and the working boundary. There were 13 innocent civilians lost their lives and 65 were injured by India’s ceasefire violations in 2018.

Pakistan and India share a 2900 km long border. It is divided into three parts: Line of Control, Working boundary and International boundary. The LOC is the boundary between Pakistan and India along the disputed territory of Jammu and Kashmir. Former US President Bill Clinton called it the most dangerous area in the world. Pakistan and India both are nuclear weapons states and have fought three wars since their independence in 1947.

India has committed 1,881 ceasefire violations in 2017 along the Line of Control (LOC) according to the DG ISPR Maj Gen Asif Ghafoor, the highest number of violations since 2003 when Pakistan and India signed a Ceasefire Agreement. The numbers of violations committed in 2018 were 208 so far on 22nd January when the DG ISPR gave his interview to a private news channel.

India aspires to sabotage CPEC development project as it will make Pakistan stronger by uplifting Pakistan’s economy. Along with this, it wants to contain China’s global economic influence and presence in South Asia.

The DG ISPR believes that the violations were an attempt to distract Pakistan’s attention from the atrocities committed in Indian Occupied Kashmir and the war against terrorism. He stated in another interview to a private news channel on 11th January that India has been a big hurdle for Pakistan in the war against terror, whenever the Pakistani forces focus on the western border with Afghanistan, India increases its ceasefire violations along the eastern border.

He also presented Kulbhushan Jadhav, the Indian spy caught in Balochistan, as an example of India’s involvement in Pakistan’s internal affairs.

Foreign Secretary, Tehmina Janjua, in an exclusive interview to Global Village Space (GVS), told, “a belligerent attitude is being created in India against Pakistan by Indian media and politicians. Pakistani villages were being hit by mortars which result in causalities.” She also explained the difference between the working boundary on Pakistani side and Indian side.

She explained that Pakistan’s population is living right up to the zero line of the working boundary which the population on the Indian side of the boundary has been moved so whenever there were ceasefire violations, Pakistan suffers causalities but when Pakistan retaliates, their civilians are not affected. Janjua explained that the population along the border cannot be moved since their villages, fields, and homes were on the border.

International relations experts and defense analysts also believe that South Asia is the most volatile region in the world because the traditional rivalry between the two nuclear states.

India’s  media, on the other hand, has been accusing Pakistan of the ceasefire violations. India’s Defence Minister Nirmala Sitharaman on 7th February accused Pakistan of 860 ceasefire violations during 2017 while speaking to the Lok Sabha (Parliament of India). She also stated that the Indian army is defeating Pakistan’s nefarious designs by proactive and determined action. There are 650,000 to 750,000 Indian soldiers are reportedly stationed in the Indian occupied Kashmir (IoK).

Strategic experts believe that India is taking advantage of Pakistan’s strained relations with the US and increasing pressure from the eastern side of the border. Some experts suggest that India is starting to believe that it can coerce Pakistan with aggression since Pakistan is surrounded by volatile borders. India also considers China-Pakistan Economic Corridor (CPEC) a threat. India has serious concerns on the China-Pakistan’s mutual ventures.

Increasingly, it is becoming apparent that India aspires to sabotage CPEC development projects because this will uplift Pakistan’s economy and make the country stronger and make it less likely to kowtow to India’s regional aspirations. Along with this, it wants to contain China’s global economic influence and presence in South Asia. Defense analysts worry that South Asia is the most volatile region in the world because of the traditional rivalry between the two nuclear states and that any conventional war may escalate into a nuclear war which would be catastrophic for the whole world.