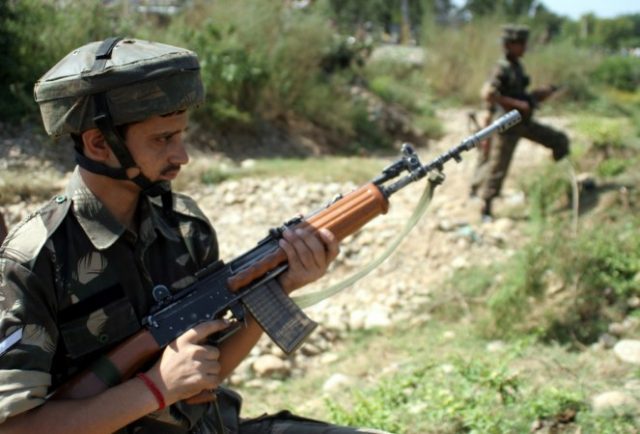 Indian forces on September 13, 2018, as a part of their incessant campaign of terror and mayhem, took lives of eight Kashmiri youngsters in valley’s Sopore, Riasi, and Kupwara areas. During the operations, State authorities suspended internet and other communications services. The educational institutions were forcibly closed calling the acts as “precautionary measures”. In the incident, the most gruesome and inhuman act perpetrated by the Indian troops was, however, not the martyring of the youth.

In fact, the Kashmiris have been offering countless sacrifices for their sacred cause and, unfortunately, it has become a routine matter for the benumbed Indian security forces to deprive the Kashmiri youth of their lives through such operations. The most painful part in the whole story was that body of a youth, after being killed, was dragged in the streets of Kashmir by tying its legs with ropes. Photographs of the incident went viral on social media forums and it was not really an easy glance for any person with a human heart.

The report noted flagrant human rights violations particularly on the Indian side of Kashmir and there is no form and shape of violation left which India has not perpetrated against the helpless people of the valley.

Indian forces, under the Modi’s rule, have been crossing all previous limits in their brazen acts of human rights violations. It seems absolutely no human consideration are made while perpetrating such acts and the ‘terrorism’ against the protesting youth is pursued as state policy. Such an apathetic incident is a truly a black spot on the face of so-called liberal democratic India.

This is not the singular occurrence in which the humanity needed to hang its head in shame, rather innumerable incidents have been noted in the first-ever report published by United Nations’ Office of the United Nations High Commissioner for Human Rights (OHCHR) in June this year. One similar episode report quotes when on 14 April 2017, such an incident could catch huge attention worldwide after a video and some photos of the incident went viral on the internet.

It could be seen in the video that a Kashmiri young man, Farooq Ahmad Dar, was seen tied on the front of a moving Indian Army jeep on the roads on Kashmir, while a soldier would shout; “This will be the fate of those who throw stones.” No war law, no international code of conduct would justify such a grievous action against an unarmed civilian. The Indian authorities, instead of showing a shred mortality by discouraging such an insensate and atrocious act, the Indian military high ups, Army chief General Bipin Rawat himself, awarded the accused Major with the accolade for his effective “innovation” to terrorize the protesters.

The fact of the matter is that India army commits all such heinous acts with unblushing impunity without any fear of being declared war-criminals or condemnation from the world’s steward of human rights including the western champions. The situation for the Kashmiris is getting worse with every day passes and occupation for them has become hardest to live with. However, the appearance of OHCHR report in such a vexing environment was no lesser a blessing and a ray of hope not only for the people of J&K but also for the ones who share the cause.

It is the high time in the wake of UN Report that the whole nation, particularly youth must take it as a responsibility to highlight the Kashmir issue on all social media forums as well as through other means of communication.

The report is first of its kind and its importance in bringing the Kashmir issue under limelight can in no way be overshadowed. In the 49-page report, the human rights violation in both Indian and Pakistani side of Kashmir have been the general subject of the study. The special focus of the report is, however, on the Indian part of the Kashmir post-Wani era; Human rights violations especially the post-Wani era i.e. from July 2016 to April 2018 has touched the new heights.

The report noted flagrant human rights violations particularly on the Indian side of Kashmir and there is no form and shape of violation left which India has not perpetrated against the helpless people of the valley. From the utter lack of access to justice and unique impunity the Indian forces enjoy, to the practice of so-called administrative detentions and from excessive and disproportionate application of force through lethal weapons like pellet-firing shotguns to arbitrary arrests and detention, including that of children, are the some of the major methods of the violation of the rights of the people of Kashmir.

Then the employment of tactics such as brutal torture and enforced disappearances to suppress the voices of the protesting youth along with suffocating restrictions on the right to freedom of expression, have worsened the situation beyond any stretch of the imagination. Even discovery of mass graves and the cases of mass rapes (such as Kunan-Poshpora incident) do not suffice to awaken India’s conscience. Only in 2016, according to the civil society groups estimates and the UN report notes, Indian forces killed as many as 145 people while many more were injured.

All the crimes and violations are committed with absolute immunity and, as the report notes, so far not a single criminal has been prosecuted. However, contrary to the gravity of situation noted by UN in its report, Indian authorities’ and Indian media’s response and reaction on the report was so offensively repugnant that it appeared as if some neo-colonial power was addressing to some of its satellite state rather than a UN office. Indian useless clamor on the report dubbing it “fallacious”, “tendentious” and “motivated,” however, could in no way make the report look less significant.

So much so the Indians’ reaction reeked such a bad hubris that UN Commissioner’s Spokesman was forced to say that they were “deeply disappointed by the reaction of the Indian authorities.” It is regrettable that Pakistan has been confused on its Kashmir policy while India has never minced its worlds in declaring Kashmir as an integral part of Indian Union. Pakistani media found the least interest in the UN report while Indian media went at the top of its voice to mitigate its worth.

Why even on such a crucial matter Pakistan’s “fourth pillar of state” has to consider its corporate whims and wishes first and national interest later? It is the high time in the wake of UN Report that the whole nation, particularly youth must take it as a responsibility to highlight the Kashmir issue on all social media forums as well as through other means of communication. At the state level, an effective diplomatic strategy and counter-narrative to the Indian version on Kashmir are needed the most.

The writer is an independent research analyst based in Islamabad and contributes to many national media publications. He is an M.Phil Scholar at School of Politics and International Relations (SPIR), Quaid-I-Azam University Islamabad. His areas of interests include; Strategic and Security affairs of Middle East, South Asia especially the Indian Ocean Region. mustansar.tasir@gmail.com The views expressed in this article are authors own and do not necessarily reflect the editorial policy of Global Village Space.

Pakistan, Saudi Arabia both necessity of each other: FM