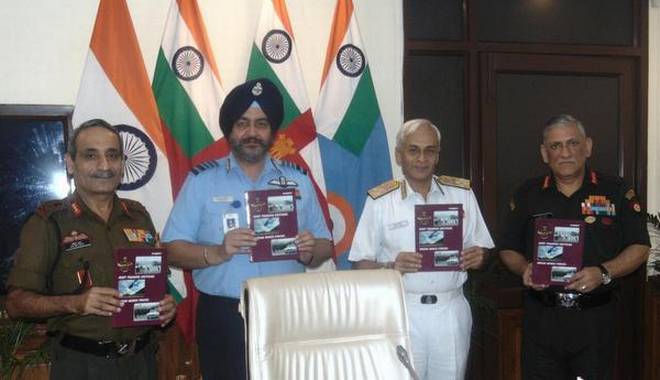 India’s newly annunciated “Joint Armed Forces Doctrine” envisaging force projection beyond its borders mandates that the three services, Army, Navy, and Air Force, will fight as an integrated force. Calling for cooperation and inter-operability of goals, services, techniques, command structure and logistics as opposed to fighting independently of each other, the Doctrine spells out combatting transnational threats and internal threats (including left-wing extremism in various parts of the country), etc by improving inter-service coordination.

Elaborating “Internal threats” as “Islamic Fundamentalism” in Indian-Held Kashmir, the Doctrine fails to mention the horrible atrocities unleashed by the Indian Army.

Elaborating “Internal threats” as “Islamic Fundamentalism” in Indian-Held Kashmir, the Doctrine fails to mention the horrible atrocities unleashed by the Indian Army. The Naxalites are a daunting challenge affecting morale and economic development as many as 75 (out of India’s 707) districts through a wide swath of Central India. Aspiring to be a world power exercising regional hegemony while playing up Pakistan as the “ground zero” of terrorism, India exports “state terrorism”, Kulbhushan Jadhav-style, in neighboring countries while failing to effectively combat Naxalite terrorism within its own borders because of lack of a coherent strategy. What about the continuing low-intensity insurgencies in many states in Mizoram, Manipur, Nagaland, Bodoland, Assam etc?

The language spells out possible retaliation against whoever is in “possession of the Weapons of Mass Destruction (WMDs).”  One guess who do you think they mean? Formalized as India’s retaliatory tactics against “terror provocations”, the scope of “surgical strikes” has neither been defined nor clarified. Claim to conduct “surgical attacks” last Sep on “terrorist bases” across the Line of Control (LOC) in Azad Kashmir was mere Bollywood-style fabrication force-multiplied out of proportion by a bellicose Indian electronic media.

The recently created South Western Command (SWC) and the shifting of armored forces to this sector gives wide spaces in the desert for maneuver. The Doctrine refers to “Air landed” combat forces in conjunction with transferring a large number of helicopters into SWC area to achieve simultaneity of force application to gain a foothold across obstacles, this should be a cause for concern for Pakistan. To supplement our conventional forces, our tactical nuclear weapons must be deployed judiciously to counter this threat.

“There is no jointness to speak of on the ground, so to produce a Doctrine is meaningless.”
– Admiral Arun Prakash

Contrary to the spate of jingoistic jargon by the Indian media, Indian military analysts, writers and retired uniformed personnel have been scathingly critical of the “Joint Doctrine” calling it “unprofessional and meaningless.” On  May 7, in “India Today,” noted analyst Bharat Karnad called it an ‘unsophisticated, college sophomore-level paper’…… “taken in toto though, this paper is a lot of thin air masquerading as “Joint Doctrine”. Bharat Karnad further complained in another article, “Have railed in all my writings for some 30 years now about the wrong threat perceptions animating the Indian military, when one gets so basic a thing wrong, why can the Armed Forces get it right? Anyway, here’s proof, albeit indirect, about just which threat our military is preoccupied with — Pakistan. In a section entitled “Strategic environment scan”, the document speaks of “the requirement to safeguard our territorial integrity” owing to the “disputed borders” and lists the Line of Control (LOC) in the west first, not the Line of Actual Control (LAC) between Indian and Chinese-controlled territory where the threat is scarier” unquote.

Terming the joint document ‘anodyne, farcical and premature’. Admiral Arun Prakash, former Navy Chief and Chairman COSC says, “There is no jointness to speak of on the ground, so to produce a Doctrine is meaningless.” To quote Anit Mukherjee from the Brookings Institution, “The purpose of such a doctrine is also to convey its intent, challenges, and threats to a country’s strategic partners and adversaries. It is on this count that it falls short of the mark possibly because it was developed in the absence of a clearly defined “national security strategy”.”

For US consumption, the major threat may be propagated as China but if one reads between the lines, standing like a rock thwarting India’s hegemonistic ambitions, Pakistan is the real enemy to overcome and obliterate.

The Joint Doctrine “show of force” involves “force projection” using geographical location and status to influence the region. China’s presence in the Indian Ocean Region (IOR) shifts global geopolitics focus to the Asia-Pacific and explains India’s alignment with the US (the enemy of an enemy is a friend) to contain China’s fast-paced modernization with its growing economic power putting Washington’s regional interests at risk. Calling for “geopolitical rebalancing,” the doctrine indirectly refers to China as the threat of “increasing assertiveness by emerging powers.” India fears that some of its neighbors might move closer to China to ward off the challenge to their sovereignty. The danger from the spread of radicalism aside e.g. indicating Pakistan, indirect references are also made to the volatile conditions in Nepal and the Maldives. The world has short memories about India’s misadventures interfering in the internal affairs of smaller neighboring countries on its periphery, Sikkim, Sri Lanka, Nepal, Maldives, etc this following sponsoring the 1971 secession of Bangladesh.

Having had the dubious pleasure of being incarcerated for a little over three months in an Indian prison (Agartala) and then in an Indian POW Camp (Panagarh) established and manned by the Indian Army when officially there was no war between India and Pakistan from March till December 1971, one got a sampling how India’s treats its neighbours.  Even then one lived in the romantic illusion that the hundreds of years of togetherness in South Asia would eventually overcome the prejudice and hatred by extremists exploiting race, ethnicity, and religion.  One holds a great number of Indian friends in the highest esteem but how does one overcome the mindless animosity of some who are nothing but closet Hindutva bigots? Going on for decades, the hybrid war is meant to overwhelm us as well as the others in South Asia. Acute disappointment aside we have no choice but to combat the hybrid war which has intensified after Modi’s coming to power and to quote Ajit Doval, “given a free hand to inflict pain on Pakistan”.

The Indian Armed Forces Doctrine is no substitute for the “Arthaśhāstra” written nearly 2500 years ago but RAW has closely followed its guidelines since its inception in the 60s. Depending upon newly formed alliances to achieve its hegemonistic dreams by “force projection” beyond its borders, it spells out India’s naked ambition to replace the 1970s Shah of Iran as the “regional policeman.” For US consumption, the major threat may be propagated as China but if one reads between the lines, standing like a rock thwarting India’s hegemonistic ambitions, Pakistan is the real enemy to overcome and obliterate.