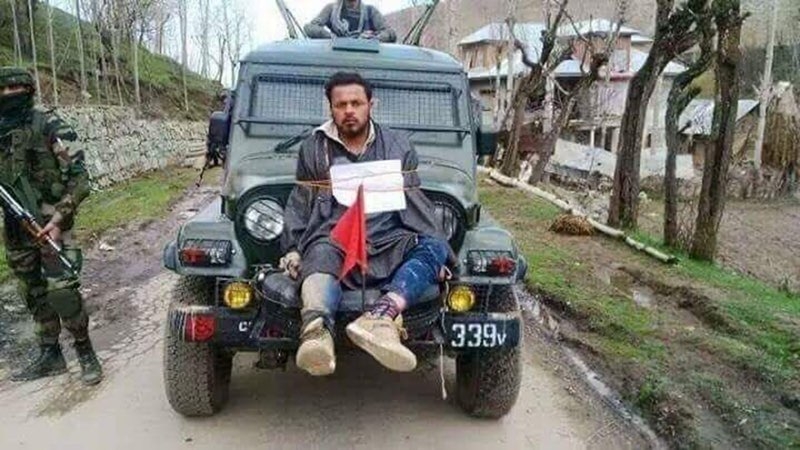 Indian Army’s Court of Inquiry (COI) on Monday acquitted the Indian officer accused of tying a man to his jeep and using him as a human shield while patrolling in India-held Kashmir on April 9, Indian media reported.

The army court acquitted Major Nitin Gogol, serving in held-Kashmir with the Rashtriya Rifles, and praised him for having the “presence of mind to avoid casualties or injuries” and “avoid” stone pelting on forces.

Dar conservatively estimated that he was paraded for at least 20-25 kilometers.

Earlier in April, 26-year-old shawl maker Farooq Ahmad Dar was strapped to the front of an olive-green vehicle by Indian soldiers with a sign pinned to his chest declaring him to be a stone-pelter. He was then paraded through the streets of Budgam district by Indian forces who wanted to make an example out of him. The video of this inhuman attempt at intimidation by Indian army had circulated on social media. The incident had once again raised concerns over the violation of human rights by Indian armed forces in held Kashmir, forcing the Indian army to investigate the incident.

Dar conservatively estimated that he was paraded for at least 20-25 kilometers.

After they were done patrolling, Dar says he was taken to a Central Reserve Paramilitary Force camp in Hardapanzoo where he said he was still kept tied up and not offered water.

“Am I a toy or a human being?” he asked while speaking to journalists, “The government must take action against the army personnel” he said.

Omar Abdullah, ex-chief minister of Jammu and Kashmir, has expressed his frustration over the Indian government’s disinterest in the mistreatment of the Kashmiri youth. He said referred to a separate video that showed an Indian security official being beaten up by a group of enraged Kashmiris, “I understand the outrage the Central Reserve Police Force video generated. I’m also outraged that the video of the youth on the jeep won’t generate the same anger,” he said.

This young man was TIED to the front of an army jeep to make sure no stones were thrown at the jeep? This is just so shocking!!!! #Kashmir pic.twitter.com/bqs4YJOpJc

This is just one example of the recent escalation of Indian efforts to control the popular uprising in Kashmir.

The state of Jammu and Kashmir has been under the AFSPA since 1992, and currently has more than 700,000 troops deployed, making it the most militarized zone in the world.

An official state circular was issued on Wednesday, April 26 which stated that the social media services were “being misused by anti-national and anti-social elements” in the Valley to disturb “peace and tranquility” and could be blocked for up to 30 days.

Read More: Why isn’t the World talking about Kashmir?

Student protests, both in person and on social media, have intensified in recent days, in opposition to the heavy-handed tactics deployed under India’s Armed Forces Special Powers Act (AFSPA), which significantly expands military power in regions considered to be “disturbed”. The policy gives officers broad legal immunity for actions taken in zones under this designation. The state of Jammu and Kashmir has been under the AFSPA since 1992, and currently has more than 700,000 troops deployed, making it the most militarized zone in the world.

On 4th May India launched a massive anti-terror operation in the valley. The operation was considered the biggest in decades. More than 4,000 security personnel from various paramilitary outfits cordoned off two villages in Shopian and conducted house-to-house search operations to “root out terrorists”, along with helicopters and drones in the air. This was an exercise last used by India in the 1990’s. They faced strong resistance from the locals and clashes broke out sporadically throughout the region.

Read More: Social Activists take to Twitter as the Kashmiri tied to military…

The situation in Kashmir is refusing to die down.

Question for discussion: What will it take for the Indian Govt. to stop its human right’s infringements in Kashmir?

Op-ed: Interesting events unfolding in DC, half the cabinet has resigned

Fissures in the GCC: Qatar stranded by its Gulf neighbors

Jack Ma, founder of Ali Baba: A communist or capitalist?