Of BBC, Kashmiri doctor and Indian reactions on twitter!

Indian public appears to be either totally in denial or shows total apathy towards Kashmiris. When BBC reported that Indian authorities in Kashmir arrested a doctor for talking to BBC most Indians condemned BBC for staging a fake drama. Others wanted BBC to be kicked out of India - voices that could feel for Kashmiris are far and few. It is this context that fears of a genocide start to look real. 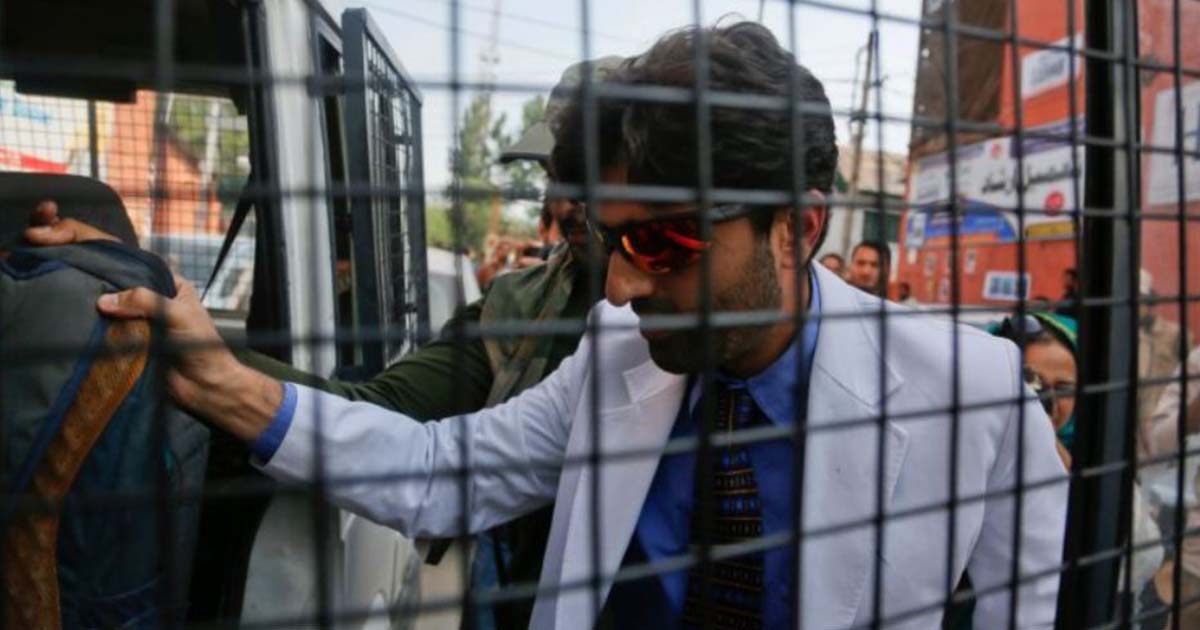 British Broadcasting Corporation (BBC) had pointed, in a report earlier this week, that Dr. Omar Salim, a Kashmiri doctor, in Srinagar, who had talked to BBC about the difficult situation faced by doctors and patients due to blockage of internet and phone lines was arrested by the Indian authorities. This insensitive act, reported by BBC, prompted a world wide reaction but surprisingly most Indian commentators on social media have either turned against the Kashmiri doctor or they think that BBC had staged a drama.

This Kashmiri doctor was detained minutes after speaking to the BBC about the worsening healthcare situation in the region. pic.twitter.com/5CGzKapX2O
— BBC News India (@BBCIndia) August 28, 2019

Dr. Omar Salim, a urologist at the Government Medical College in Srinagar had been talking to BBC for 10 minutes when Jammu & Kashmir police swooped in & took him away. Several efforts to find out where the doctor had been taken failed due to communication blockade. Dr. Salim was merely explaining the problem doctors and patients were facing in hospitals due to the absence of phone and internet.

Modi regime suspended all land lines, cellular networks and internet in the occupied Kashmir on 4th Aug before announcing the abrogation of Art. 370 and 35-A. Everything is still suspended after 24 days. Most Kashmir is under strict curfew.

Indian authorities arrested the doctor minutes after speaking to BBC highlighting the worsening conditions of people in Indian Occupied Kashmir. Dr. Omar had staged a protest urging the Indian government to lift the internet blockade which is creating several problems in providing free healthcare to the people of Kashmir.

Dr. Omar had been heard on BBC saying: “This is not a protest; this is a request. Please restore landline and internet connectivity for all hospitals and medical establishments in Jammu and Kashmir”. Dr. Omar was earlier seen protesting in Srinagar holding a placard with the same message. Most Indians on social media have lashed out against Dr. Omar and BBC but there were some sane voices too.

Normalcy — A doctor in Kashmir who was talking to BBC expressing his concerns for his patients, requesting authorities to ensure availability of dialysis – he was taken away by forces and @rahulpandita confirms he hasn't been heard of since. TERRIBLE!pic.twitter.com/Pm0vp7ctq6— Gaurav Pandhi (@GauravPandhi) August 27, 2019

Dr. Omar Salim told of many patients who were in dire need of medical assistance ranging from chemotherapy to Kidney dialysis and were suffering because hospitals in Indian Occupied Kashmir can no longer provide them assistance for such severe cases – since approvals of many medical schemes had to be obtained through either internet or through phone calls. Both are not available for the past 24 days.

Political analysts, looking from outside India, believe this move to be the height of brutality Kashmiri people are suffering from. Dr. Moeed Pirzada, a prominent media personality, in Pakistan tweeted his reaction about the incident saying, ‘Is this height of brutality? Or Stupidity or shamelessness? Or all combined together? Or insecurity of hearing even the slightest of truth from any Kashmiri?

Is this height of brutality? or stupidity or shamelessness? or all combined together? or insecurity of hearing even the slightest of truth from any Kashmiri? https://t.co/crg2v7xEYd

Pakistan’s Ambassador at the UN, Dr. Maleeha Lodhi also spoke out her mind.

Kashmir is now also facing an acute health crisis due to medicines running out and regular patients being turned away to keep the space empty for the victims with severe injuries. Indian authorities, that are by their own admission using pellet guns against the protestors, were also reported to be pressurising the hospitals to not issue the death certificates to keep the death statistics low. Governor Satya Paul Malik had admitted of injuries from the use of pellet guns – but his figures of casualties are believed to be much lower than the actual situation and that’s why hospitals have become pawns in the war of disinformation.

Social media, across the world, was overrun by the outrage of ordinary people, public figures, and leading news media outlets who shared several similar stories on Twitter.

A doctor in Kashmir was arrested by Indian security forces minutes after speaking to BBC Urdu about the health crisis that has been unfolding in the region as a result of the security clampdown pic.twitter.com/h2FFheXtfU— TRT World (@trtworld) August 27, 2019

“So many innocent people are dying for no fault of their own,” says a doctor in India's northern state of Kashmir. “Hospitals have become graveyards.” https://t.co/c3AxlkzMHD— The Wall Street Journal (@WSJ) August 28, 2019

A baby died under the #Kashmir lockdown because a phone call couldn't be made:
'The doctors at the hospital regret that the ban on communication prevented them from real time communication to the senior gynaecologist that could have saved the baby.'https://t.co/gQhizKIidc pic.twitter.com/tTNfeuNUEN— Alex Jones (@AlexJon04185141) August 28, 2019

Several Indian citizens, and scholars of Indian origin, also took to Twitter expressing moral outrage against the insensitivity and stupidity of the authorities. They wondered if everything is returning to “normalcy” as the Modi regime is telling the world then why a Kashmiri doctor had to be arrested and silenced for such a non issue.

But surprisingly most Indian citizens, have been so desensitised of Kashmiris plight, perhaps in grip of RSS Hindutva ideology, that their comments reflected apathy and contempt for BBC and Dr. Omar Salim, Kashmiri urologist. Denial about the reality of Kashmir is now so strong that many blamed BBC for using an actor as doctor.

Really 😂 😆 amazing that our government is so fast awsm

Nicely made news, wonder how much they have paid this actor— Vinod Bhagat (@IamVinodBhagat) August 28, 2019

Another biased report by the BBC. Scrap all of these meaningless channels and let UK over 70s have #freetvlicense— RaKsTaR (@rakstar79) August 28, 2019

Misleading ! Shamefully misleading!! He is saying it may lead to … !! Hope doctor requests the terrorists & their sponsor to not to use INTERNET as weapon of hatred as it has better use….. PoK people should be glad to know about #PMAY….free medical facilities for poor 👍— GARUNA – Socially Distant 🙂 (@iamanurag04) August 28, 2019

The large number of authentic Indian reactions that appear below the BBC story again prove that barring few exceptions – of liberal voices in media and politics – most Indians demonstrate total apathy (absence of any human feeling) towards the plight of Kashmiris. While almost all Indians passionately believe that Kashmir rightly belongs to them they only express feelings of hatred and contempt towards Kashmiri Muslims who constitute 90% plus population of Kashmir Valley.

This Kashmiri doctor was detained minutes after speaking to the BBC about the worsening healthcare situation in the region. pic.twitter.com/5CGzKapX2O
— BBC News India (@BBCIndia) August 28, 2019

Comments, like these, appear everywhere, all across the net, in hundreds and thousands and they clearly demonstrate that not only the Modi government but majority of Indian citizens, even educated ones, have no human relationship with Kashmiris. Kashmir in their minds is a historic land that belongs to Hindus (because of its primitive history before 12th century) and Kashmiri Muslims, that occupy that land, appear as unwanted nuisance to them. It is this context that frightens Kashmiris, this explains why India has not been able to integrate Kashmir into Indian polity and why Kashmiris in the valley, in Pakistan and across the world fear genocide as a consequence of the abrogation of 35-A, that now allows Indian settlers to buy land in Kashmir.

DG ISPR grills Indian army chief: You have innocent blood on your hands