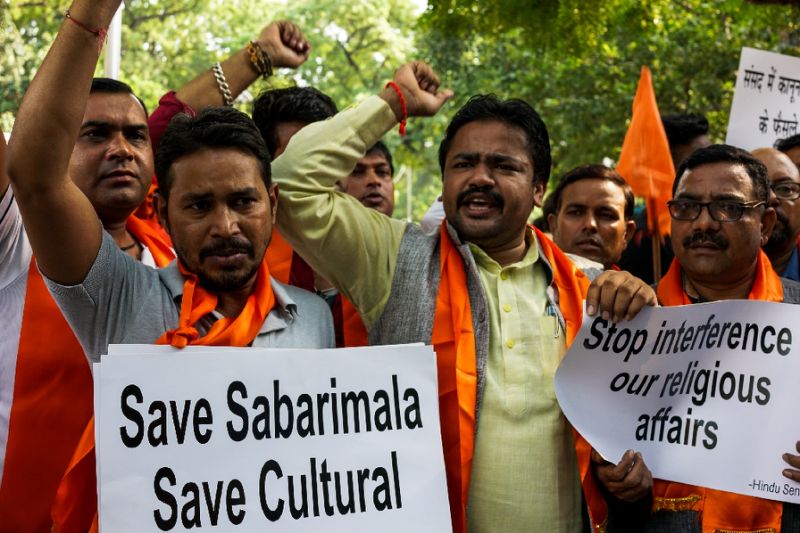 India’s top court Tuesday agreed to hear challenges to its decision to overturn a ban on women of menstruating age from entering a Hindu temple, after protests against the ruling. The Supreme Court said it would review the petitions on January 22 but until then women and girls aged 10 to 50 could still pray at Sabarimala in Kerala.

“We make it clear that there is no stay of the judgment and order of this court dated 28 September 2018,” the five-judge bench said. The decision to revoke a ban on women of menstruating age from entering the hilltop shrine in southern India sparked a backlash among conservatives.

Kerala police said this week thousands of extra officers will be deployed to Sabarimala and crowd control enforced at the temple to avoid a repeat of last month’s violence.

Some temple devotees angrily resisted the order and prevented female worshippers from entering the shrine when it reopened in October for a few days.

Another showdown looms with at least 300,000 worshippers including 560 women of menstruating age registered to visit Sabarimala when it reopens again in November.

The temple’s chief priest welcomed the court reviewing its decision but rejected the notion of women entering the Hindu shrine until then. “I am happy and don’t think women will now be able to enter,” Kandararu Rajeevaru told AFP from Kerala.

Traditionalists say the court ignored their beliefs and devotion to Ayyappa, the temple’s celibate deity. Those defending Ayyappa clashed with police in October at Sabarimala, prompted the arrest of more than 2,000 people.

Kerala police said this week thousands of extra officers will be deployed to Sabarimala and crowd control enforced at the temple to avoid a repeat of last month’s violence.

Pramod Kumar, Kerala police spokesman, earlier this week told AFP that restrictions will be imposed on those wishing to visit the temple, which pilgrims can only reach on foot after a steep climb.

What was the scandal between ‘Queen Victoria’ and her adviser ‘Abdul’?