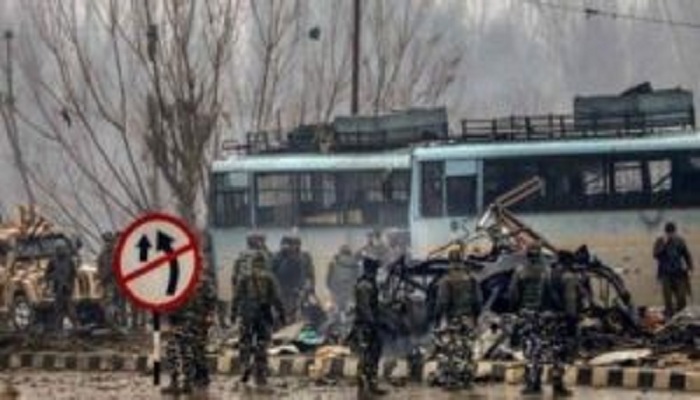 In what is said to be the deadliest attack on Indian occupation forces in Jammu and Kashmir since 2002, nearly 40 soldiers are reported dead and several injured so far. The attack was carried out using an explosive-laden van which was blown between two adjacent buses carrying Central Reserve Police Force (CRPF), who were returning to duty. “A convoy in which the soldiers were traveling was attacked by a Jaish-e-Muhammad suicide bomber, who rammed his explosives-laden vehicle into one of the convoy’s buses,” reported The Hindu.

According to The Hindu, he was identified as Adil Ahmad Dar alias ‘Waqas Commando’, a resident of Pulwama’s Kakapora. As it generally happens, the Indian forces have cordoned 15 villages around the one from where the said attacker hails and conducted a house-to-house search. And it spikes further protest on part of resident Kashmiris who suffer humiliation and financial loss due to these raids.

The massive human rights violation and torture, especially the recent use of pellet guns, has been widely reported on international media and forums such as the Human Rights Commission.

The death toll has even surpassed the pre-dawn raid carried out on a military base in Uri back in 2016 which resulted in the death of 19 Indian soldiers. In retaliation, due to intense public pressure, the Modi government was forced to announce fake “surgical strike” been carried out along the Line of Control claiming to have eliminated the hideouts of terrorists. Pakistan condemned and utterly denied these false accusations taking international media personnel to the location where India was claiming to have carried out the raids. Uri attack pushed the bilateral relations into deep frost and they have not truly been able to come out of it since then.

A Matter which Needs Attention

While any loss of human life is sorrowful, India needs to realize the root cause behind such a troublesome incident where a human blew himself to taken lives of forces which he deemed occupational and usurping his rights. Kashmir, for far too long, has been falsely brushed an internal matter of India by its politicians and military establishment. Blank denial of the problem led to increased animosity in the hearts and minds of Kashmiri masses– against the Indian state– who finally started an armed struggle back in 1989.

India has always tried to paint the picture of “foreign intrusion” from the state of Pakistan to count for the unrest in Kashmir valley. In the years followed by Uri attack, there has been a massive outbreak of street protests against India which school and college going youth was seen hurling stones at Indian forces. This picture in its own way is a referendum against the India occupation– which is rejected by the Kashmiri population with an overwhelming majority.

The massive human rights violation and torture, especially the recent use of pellet guns, has been widely reported on international media and forums such as the Human Rights Commission. Yet it has been unable to grasp the attention of powers who have out themselves to the position of “guardians of global security and human right”.

The attack was carried out using an explosive-laden van which was blown between two adjacent buses carrying Central Reserve Police Force (CRPF), who were returning to duty.

The massive deployment of troops inside Occupied Kashmir is not only heinous crime for the people living there, but in a way, the responsibility of deaths of Indian soldiers also lies on Indian political and military establishment for failing to realize the graveness of conflict.

In every possible way, it is more of a humanitarian issue rather a geographical one. But the pattern suggests that Indian political brass in once again going to turn the eyes away from the real issue and use the Pulwama attack as an excuse to up the cross-border firing onto civilian population inside Pakistani mainland.

While the situation calls for talks involving India, Pakistan, and Kashmiri leadership, the center of the issue, due to general elections around the corner it would once again be used to gain the political momentum to win seats, but the cost will be paid by the people of Kashmir and Indian soldiers deployed in the valley.

Article 35-A: Indian SC defers hearing to January 2019 as IOK shuts down