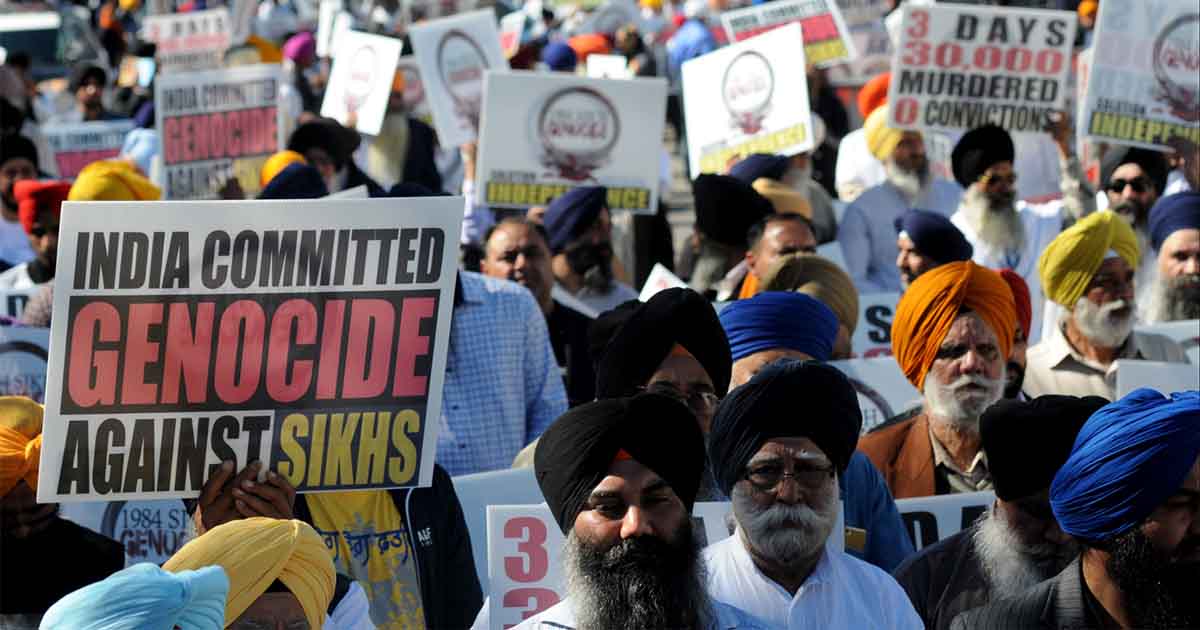 India’s human rights record of India has been a matter of dispute since its independence from British rule in 1947. The Indian Republic under the Indian National Congress (INC) soon became them to be regarded internationally as the “largest democracy in the world”.  Even after the power of the Nehru dynasty was broken changes of governments has always come through elections. A lot of effort has sent to upholding the fiction of India as a secular state where religious belonging was not an impediment to their socio-economic betterment.

This myth was laid to rest at the latest in 2002 when with vociferous support of (than) Gujarat CM Modi thousands of muslims were butchered at will.  In 2006 the Sachar Report on the situation of Indian Muslims. Muslim’s submissions before a judicial enquiry were dismissed as false. Indian Muslims in 1947 mainly constituted a backward community, by 2006 they had not improved their standing.

The Modi government singlehandedly broke its pledges to the UN and the international community promising to uphold the autonomy of Kashmir; it broke the Simla and Lahore Agreements which acknowledged a bilateral treatment of Kashmir’s status and it broke the Indian constitution that prescribes the concurrence of J&K to any change in the status.

They were lacking in education, the poverty rate among the is higher than other communities, their share in academic and government jobs is well below their population share. The Modi government singlehandedly broke its pledges to the UN and the international community promising to uphold the autonomy of Kashmir; it broke the Simla and Lahore Agreements which acknowledged a bilateral treatment of Kashmir’s status and it broke the Indian constitution that prescribes the concurrence of J&K to any change in the status.

Modi managed that part by alleging that Kashmir that is anyway ruled from Delhi as an emergency status thus he had to ask his own Governor for concurrence only. In the Indian parliament the BJP majority ensured that the change was rubber-stamped without any problem. With the elected Kashmiri leaders under ‘preventive arrest’ and all demonstrations and public meetings banned  Modi destroyed within a day whatever camouflage of democracy was left and with the mainstream political parties out of the way and gagged, the stage  is now wide open for Armed resistance movements as the only alternative for Kashmiri youths.

A similar situation, if not worse than in Kashmir, prevails in the North-eastern part of India, the so-called seven sisters (Arunachal Pradesh, Assam, Manipur, Meghalaya, Mizoram, Nagaland, Tripura) of India where since 1947 sustained separatist insurgencies are going on and harsh government and military responses have caused serious human rights violations. While the States have a number of common features, such as distant location, difficult terrain, vast natural resources and a predominantly tribal way of life, they constitute a highly heterogeneous region with their uniquely separate identities in terms of origin, growth and history of the various tribes in India.

Given their closeness to Burma, Tibet and Southeast Asian ethnicities they have hardly anything in common with subcontinental Indians. They especially lack a caste system that gives them only the lowest status of ‘Dalits’. The  arrival of illegal immigrants, refugees, ethnic conflicts, degradation of forests and forest resources,  large scale deployment of army and paramilitary forces to tackle the problem of ‘insurgency’ are, to mention a few, largely responsible for human rights violations in the region.

A lot of effort has sent to upholding the fiction of India as a secular state where religious belonging was not an impediment to their socio-economic betterment.

The political and economic models thrust from Delhi have also been questioned and contested by the indigenous people, as these models do, in some ways, impose upon their developmental, political and economic rights. The agents and forces of globalization in the form of multinational products and global culture have posed a serious challenge to the developmental and cultural rights of the indigenous people.

The harassment of the general public at the hands of the army of independent India began in mid-fifties, in fight against Naga insurgency. As the trouble spread to Mizoram, Manipur and Tripura, more troops were rushed to  the region and more brutal methods were employed to control the situation. Although the overall situation in the North East has improved in recent years and efforts are on to find a negotiated settlement to the complex Naga problem, the  North  East remains disturbed with militant movements continuing with ferocity in  Manipur, Tripura, Assam and Nagaland.

These States continue to be administered militarily because of the overwhelming presence of the Centre’s armed forces and the incompetence and demoralization of the  State police organizations. In these disturbed areas the most notorious law is the Armed Forces (Special Powers) Acts (AFSPA) under which military can search and detain anyone without any court order. This act has been source of huge human rights violations in all north-eastern secessionist areas as well as in Kashmir.

Indian democracy has failed its citizens in many other respects as well, particular the human rights record needs to be examined. The Congress with its fig leaf of secularism was far from satisfactory with regard to democratic spirit and method.  We have only to remember the forced sterilization campaign of Indira Gandhi or the her covert operations in East Pakistan (now Bangladesh) during the time leading up to 1971, in comparison with the BJP ideology of Hindutva the Congress Party seems by far the much lesser evil.

Given their closeness to Burma, Tibet and Southeast Asian ethnicities they have hardly anything in common with subcontinental Indians. They especially lack a caste system that gives them only the lowest status of ‘Dalits’.

The election of Modi into government brought about a rule that can rightly be compared to the racist regime of Hitler who, by the way, was elected ‘democratically’ into government as well.   Since then the Sangh Parivar’s “Hindutva” has done away with whatsoever human rights there were left. Very much like the Nazis but using religion (Hindu religious bigotry) unlike the Nazis (who used national socialism), Hindutva is the crude form of Hindu nationalism. It declares Hindu-dom the very essence of Indian-ness. Muslims and Christians and other non-Hindus are considered aliens, foreigners to India and not part of the Indian nation ‘Mother India’.

Read more: US calls on India to respect people’s rights in Kashmir

They therefore don’t enjoy the same rights. The task of the Hindu nationalists in the Sangh Parivar and their political wing BJP is to make everybody living in India Indian i.e. Hindu. Forced conversions and discrimination in all spheres of life are the consequence for those who are not ready to comply. Exclusion from education and jobs, harassment when professing their religion are a daily occurrence. Muslims are killed by mob when they are even suspected to eat beef or keep beef in their houses. The Indian government covertly and overtly supports religious-nationalist Hindutva mob suppressing human rights voices in society.

Indian democracy has failed its citizens in many other respects as well, particular the human rights record needs to be examined.

In a bid to assert power and control over the lives of civil society, an attempt is being made to impose a religious-nationalist ideology on everyone. Intellectual differences are settled via assassinations. No wonder individuals from hardcore Hindu religious groups were responsible for murder of intellectuals. With a human rights record like this the future not only of Kashmiris but of all religious and ethnic minorities is bleak in India.

The same is true for women’s rights. Human Rights Watch in his 2019 report writes: “Numerous cases of rape across the country once again exposed the failures of the criminal justice system. Nearly six years after the government amended laws and put in place new guidelines and policies aimed at justice for survivors of rape and sexual violence, girls and women continue to face barriers to reporting such crimes.

Victim-blaming is rampant, and lack of witness and victim protection laws make girls and women from marginalized communities even more vulnerable to harassment and threats.” With another almost five years of Modi’s rule to go, things will get much worse in the months and years to come. This could be even worse if the US and the rest of the international community don’t touch upon this issue for their own crass commercial and/or geo-strategic reasons.

Ikram Sehgal, author of “Escape from Oblivion”, is Pakistani defence analyst and security expert. He is a regular contributor of articles in newspapers that include: The News and the Urdu daily Jang. The article was first published in Daily Times and has been republished with the author’s permission. The views expressed in this article are the author’s own and do not necessarily reflect Global Village Space’s editorial policy.