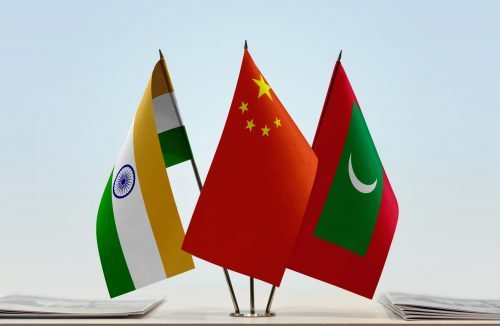 Maldives is troubled country where elected and unelected offices vie for power and political system is vulnerable. Country lacks democratic maturity and culture and it creates chaos and regional powers intervene with their own vested interests while ignoring mandate of people and support strong men. Supporting one political force and ignoring other and not letting society to shape its future is serious violation of rules of sovereignty which have been enshrined in United Nations charter seventy three years ago. India being largest democracy is trying to micromanage small Maldives which is struggling to survive political shocks.

World looks at India as regional player and security guarantor in Indian Ocean region but India has yet to achieve maturity. India has to detox its own democratic system where Hindu nationalism is damaging secular India but its interfering in other countries while forgetting its own troubles. India is immature power but it is trying to have bigger role which neither It can play not great powers should let it play for broader stability of region.

Silence of great powers like US, UK and Russia may make south Asia a conflict zone where states have nuclear weapons and outstanding issues like Kashmir are still waiting great powers attention.

India threatens the sovereign right of Maldives of having independent relations with other countries. Maldives signed free trade agreement with china which is a right of both countries. Maldives has also endorsed Chinese Maritime Silk Road project while ignoring Indian strategic objectives as country believes China is most trusted, closest and most dependable partner.

Whereas India has demanded that its sensitivities must be addressed while dealing with China which means India asking Maldives should not deal with China ignoring India’s interest. Although bilateral trade between china and India is more than $71 Billion but India like predatory power is making archipelago Maldives to show concern while having trade with china. Personal animosity of India with neighbouring states compromises Indian status to have regional role for stability.

China may be the only country who has capability and resources to protect the region among regional powers and regional states have no doubts on Chinese intentions as China does not have politico-security agenda for region so far. Maldives need a credible regional partner which must not interfere in its domestic affairs but should respect its independent status as country and does not force it to change its politics. People and Government of Maldives have this impression about Indian influence but not about Chinese support. Because China talks about shared destiny which is building future together. A future which brings prosperity for all and no liabilities.

Whereas India has demanded that its sensitivities must be addressed while dealing with China which means India asking Maldives should not deal with China ignoring India’s interest.

Indian influence in Maldives has reduced since 2012 as Indian could not support former president Nasheed and now India is desperate to have its influence back. Political opposition of president Yameen is asking for Indian support which India may not try as its track record is not good. But any misadventures by India in terms of sending military troops in Maldives will be counter productive as sending troops n Sri Lanka to counter insurgency was disastrous for India.

What is concerned for regional states as for as Maldives is concerned that there must not be any illegal intervention in Maldives. But point of concern for many states in region is public opinion and many experienced analyst in India are thinking that India should intervene in Maldives. Mavenra Singh who is member and legislator of ruling Bhartia Janta Party (BJP) believes that looking at current crises in Maldives India should find it opportunity to intervene and that is only way India could make its place as global player. He was of the view that first the neighbours have role to play in case there is crises in neighbourhood.

This attitude is outrageous and point of concern for many in south Asia. International institutions are at place whose job is to look into such situations and not neighbours who have compromised intentions. Raja C Mohan who works for Carnegie India commented that a decisive Indian intervention is needed in Maldives and he believes Unites Sates and United Kingdom will support India. This is completely illegal and blatant violation of international law and regional states must speak up against this attitude.

Indian influence in Maldives has reduced since 2012 as Indian could not support former president Nasheed and now India is desperate to have its influence back. Political opposition of president Yameen is asking for Indian support which India may not try as its track record is not good.

This attitude in India about its role in troubled land shows India is considering itself a regional power. To show other great powers about its capability and designs India may go for this adventurism which will be a test case and if approved by great powers this will badly damage regional peace. Pakistan has long seen Indian adventurism and entire securitisation of Pakistan and nucleraziation is because of Indian adventurism and hostile behaviours towards Pakistan.

If such things repeat and countries like Maldives face Indian aggression it will make region vulnerable. Silence of great powers like US, UK and Russia may make south Asia a conflict zone where states have nuclear weapons and outstanding issues like Kashmir are still waiting great powers attention.

Regional arrangements like South Asian Association of regional cooperation (SAARC) which has been completely dysfunctional because India refused to visit in its last meeting in Islamabad. SAARC members need to assert their authority and must check role of India for its neighbouring countries especially Maldives which is facing Indian hostility.

The writer is a strategic analyst. He teaches International Politics in NUML Islamabad and is working on Ph.D. Dissertation on confessional parties. He tweets at @Qamarcheema. The views expressed in this article are author’s own and do not necessarily reflect Global Village Space’s editorial policy.

How to protect women from sexual harassment?