Indian Muslims unite to save their Religion and Country 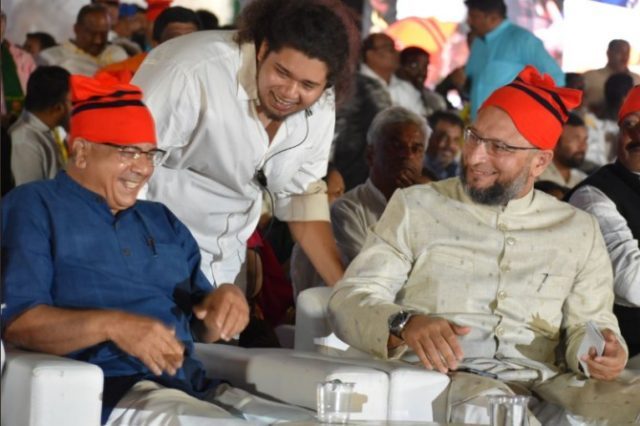 In India, Muslim groups call protest rally to ‘save religion, save country’. It is probably for the first time in post-Independence India, a call has gone out to Muslims to congregate with an ‘Islam in Danger’ slogan.

Imarat Shariah (House of Shariah), which is headquartered in Phulwari sharief in Patna, and the All India Muslim Personal Law Board (AIMPLB) have jointly organized a mega protest titled Deen Bachao, Desh Bachao (Save Religion, Save Country) on April 15 at Patna’s Gandhi Maidan. A number of senior clerics and community leaders are expected to unambiguously vocalize the sentiment that under the BJP government, neither the Muslim’s deen (religion) nor the desh (country) is safe.

Having held a series of marches and demonstrations of veiled women across the country against the Triple Talaq bill, the Muslim Board has teamed up with the Imarat Shariah to draw up a bigger action plan, clubbing the country’s law and order issue and threats to the Constitution with the perceived danger to Islam. Incidentally, Imarat Shariah was founded in 1921 to guide Muslims on Sharia-related issues in Bihar, Jharkhand and Orissa.

This helps them to polarize society and convert animosity into votes and popular support. It is through such perception management that often Hindutva militants get away with horrific atrocities and eventually are hailed as “guardians” of Indian Hindus.

“We waited for four years, hoping the BJP would learn to run the country while upholding its constitutional obligations. Our personal laws which are part of the Muslim faith are under attack. We are forced to tell the countrymen that, along with the country, Muslims’s religion is also under threat,” said AIMPLB’s General Secretary Maulana Wali Rahmani.

Rahmani who is also Ameer-e-Shariat or Chief of the ImaratShariah added that ‘DeenBachao, DeshBacho’ meet is a wakeup call, especially for Muslims. “We want to convey the message that if you don’t wake up now, there will not be enough space and opportunity to act later. There are a number of issues on the RSS agenda which this government will try to implement. After the ban on triple talaq will come the Uniform Civil Code and ban on Azaan through loudspeakers…They have a long list,” he explained.

To ensure that Muslims turn up in huge numbers, the vast networks of ImaratShariah, AIMPLB, Madrassas and Masjids have been used. Most of the attendees—the organisers expect no less than three lakh—will come from different districts of Bihar and Jharkhand and some from Orissa as well. Bihar has been divided into different halqas (regions) under the supervision of a madrassa. “Each madrassa has been tasked to mobilise a crowd from over two dozen villages and each village has hired its own buses. Everyone is paying for their travel and food. Some donations have been sent to ImaratShariah too to make arrangements in Patna,” said MaulanaMuntazirQasmi of Madrassa Arfia at village Sangram near Jhanjharpur in Madhubani district.

ImaratShariah’s general secretary MaulanaAneesurRahmanQasmi denied that any opposition party was backing the massive rally. “Leaders of political parties may come but no politician will speak. This time we will speak and political leaders will listen,” he said.

A Mumbai-based cleric recalled that around three decades ago, then president of the Jamiat ul Ulema-e-Hind, Maulana AsadMadni, had given a call to Mulk Bachao, Millat Bachao (Save Country, Save Community) rally at Delhi’s Ramlila Maidan. “Maulana Madni wanted to save the community and managed to get into Rajya Sabha after the meet. I don’t know if any of the organisers here have hopes of a Rajya Sabha nomination,” said the cleric.

With the rise of the Hindutva fundamentalist BJP to power in 2014, Hindutva militants have become prominent in most parts of India. These brutal militants have enacted savage murders of mainly Muslims on various reasons such as “Gau Raksha” (Cow protection) and “Love Jihad”.

Our personal laws which are part of the Muslim faith are under attack. We are forced to tell the countrymen that, along with the country, Muslims’s religion is also under threat,” said AIMPLB’s General Secretary Maulana Wali Rahmani.

On account of the brutal killings of Muslims – from Mohammed Akhlaq (on September 28th, 2015) to Ahmed Bashir (on January 8th, 2018) – the minority community feels insecurity in every part of the country. The roots of this hate lie in the rise of extremist Hindutva thought and the machinations of the British colonial masters.

Most Hindutva extremists spread Islamophobia by exerting hatred within the Indians against the Muslim minority in India. The extremists compare the Muslim population of India with their “archenemy “Pakistan. This helps them to polarize society and convert animosity into votes and popular support. It is through such perception management that often Hindutva militants get away with horrific atrocities and eventually are hailed as “guardians” of Indian Hindus.

Only time will tell, if this agitation by Indian Muslims will be successful or not. Also the answer about the return of the Two Nation Theory may also lie in the future. While the Muslims have stated that they are struggling to save their country but in case of increasing pressure, they may well go the path of Pakistan in a country already facing multiple separatist movements. The horrifying case of the rape of a minor by Hindutva extremists in order to scare the local Muslims seems to be the proverbial straw that broke the camel’s back.

Joe Biden nominated by Democrats to face a “President of cowardice”

Afghan peace process to be bolstered by ceasefire