Indian proxies are the greatest threat to Pakistan 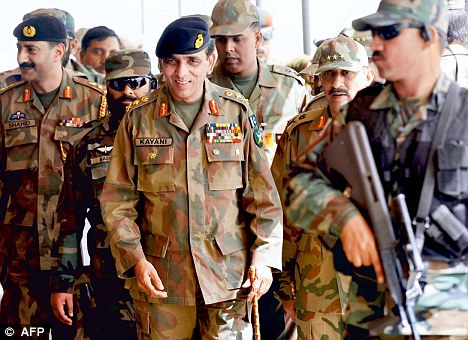 India has shifted the conflict to the sub-conventional level by resorting to the use of terrorism and proxies against Pakistan after realizing that conventional war is inconceivable due to its nuclear capabilities. This was stated by Adviser National Command Authority Lt Gen (R) Khalid Kidwai while speaking at the 6th Workshop on ‘Defence, Deterrence, and Stability in South Asia’, which was jointly organized by Islamabad-based Center for International Strategic Studies (CISS) and International Institute for Strategic Studies (IISS), London.

His statements come in the wake of a sustained campaign by Indian backed terrorists against the Pakistani nation. The workshop, which was participated in by diplomats, academics and analysts of strategic issues, deliberated on regional issues, including Pakistan’s relations with the United States and India, security in Indian and Pacific Ocean regions, and shifts and trends in nuclear doctrine and deterrence.

The nuclearization of both India and Pakistan has ended the threat of any conventional war in the subcontinent but it has not stopped the threat of waging war through terrorist proxies.

“Because of mutually assured destruction there is unlikelihood of a hot war or a conventional war and therefore the conflict has shifted towards sub-conventional level. As of now, that could be seen in full play at our Western borders,” Gen Kidwai said recalling the public pronouncements by Indian leadership of using terrorism to destabilize Pakistan.

“An announced sub-conventional direction has been taken by India,” he underscored adding that the region was now entering a “cold war era for regional supremacy creation of proxies.” Kidwai credited the reduction in chances of conventional war to Pakistan’s ‘robust nuclear capability’ and the policy of ‘Full Spectrum Deterrence’.

“The era of conventional hot wars is behind us. India can generate as much heat as it likes on the Line of Control, including phantom surgical strikes from time to time, which in any case would be strongly retaliated by Pakistan and that’s about it,” he said.

India has shifted the conflict to the sub-conventional level by resorting to the use of terrorism and proxies against Pakistan after realizing that conventional war is inconceivable due to its nuclear capabilities.

India has largely relied on violent proxies since its creation in 1947. Not only Pakistan but the rest of the subcontinent has also faced off with Indian proxies and incurred losses of life and property. Perhaps the greatest example of Indian proxies was in the two nations of Sri Lanka and Bangladesh.

Bangladesh is a nation that is highly dependent on India. In fact, it may be asserted that India was the single greatest factor in the creation of Bangladesh through its arming, training and instigating of the Mukti Bahini. However, soon after its secession, Bangladesh tried to formulate an independent foreign policy. In response, India formed the Shanti Bahini to wage a guerilla war in the Chittagong Hill tract region against Dhaka like the Mukti Bahini before them.

Sri Lanka, another major South Asian country has also had a tumultuous relationship with India. The Island nation is a stone’s throw from Southern India and hosts a substantial Tamil population which also holds in a dominant position in India’s Tamil Nadu. Sri Lanka has followed a foreign policy largely free of Indian influence; it has cooperated with different foreign powers such as the US and Israel.

Sri Lanka’s closeness to Islamabad was one major irritant to New Delhi, an instance being the provision of refueling facilities to the Pakistani military during the 1971 war. India under Indira Gandhi tried to enact the Mukti Bahini success in Sri Lanka by arming local Tamil separatists; the results were different armed Tamil outfits who in the end culminated into the organization known as the Tamil Tigers. Due to this, Sri Lanka was forced to enter into the Indo-Sri Lanka Accord of 1987 causing an Indian Peace-Keeping-Force (IPKF) to be stationed in Sri Lanka.

Bangladesh is a nation that is highly dependent on India. In fact, it may be asserted that India was the single greatest factor in the creation of Bangladesh through its arming, training and instigating of the Mukti Bahini.

However, the landing of an Indian military force had an opposite reaction to Sri Lankan society. Anti-India sentiment rose both in the majority Sinhalese and ethnic Tamils which caused the Tamil Tigers to turn against their makers. Indian atrocities on ethnic Tamils such as the 1989 Valvettiturai massacre and the Jaffna hospital massacre also contributed to this. In 1989, the Indian government was forced to recall the IPKF but still, India meddled in the Sri Lankan campaign against the Tamil Tigers.

Read more: Drones & Jets for India and threats for Pakistan: The ‘new…

The Indian government has been lately vocal in espousing the cause of these sub-nationalist groups and has been discovered funding them the world over. On March 3rd, 2016, a serving Indian officer named Kulbhushan Yadav was arrested by Pakistani authorities inside Pakistani territory. Through him, Pakistan was able to smash a network of separatists who had been working on splitting Baluchistan away through violent and non-violent means.

Baloch separatists are not the only ethno-nationalist force being exploited by New Delhi. A campaign for a separate Sindhi nation has long been waged by Sindhi immigrants based in India. Most of these separatists undertaking violent actions were based in Afghanistan often under the protection of the pro-Indian government.

On January 14, 2017, an Afghan activist by the name of Daud Khattak launched the ‘Pashtunistan Liberation Army’, an armed group along the lines of the Balochistan Liberation Front and the Sindhudesh Liberation Army. He did so while stationed in New Delhi and requested that global powers, including India, help his campaign of violence in the region.

Indian atrocities on ethnic Tamils such as the 1989 Valvettiturai massacre and the Jaffna hospital massacre also contributed to this.

On 17 January, Police in Gilgit Baltistan busted a terror cell sponsored by the Indian intelligence agency, Research and Analysis Wing (RAW), to sabotage projects related to the China-Pakistan Economic Corridor (CPEC) and generate anti-Pakistan feelings in Gilgit-Baltistan. Police arrested 12 workers of the Balawaristan National Front (BNF) from Yasin Valley of Ghizer district and seized a lot of weapons during a raid.

In September 2017, an Indian analyst wrote in the Hindustan Times’ opinion piece that RAW has ties with Tehreek-e-Taliban Pakistan (TTP). Bharat Karnad, the author of “Why India is Not a Great Power (Yet)”, writes, “Severing relations with TTP will mean India surrendering an active card in Pakistan and a role in Afghanistan as TTP additionally provides access to certain Afghan Taliban factions.” The RAW-TTP link was publicly revealed in April this year by TTP former commander, Ehsanullah Ehsan.

The nuclearization of both India and Pakistan has ended the threat of any conventional war in the subcontinent but it has not stopped the threat of waging war through terrorist proxies. Pakistan needs to be mindful of the threat these terror groups portend.

Where is the discussion on policy? – Dr. Omer Javed