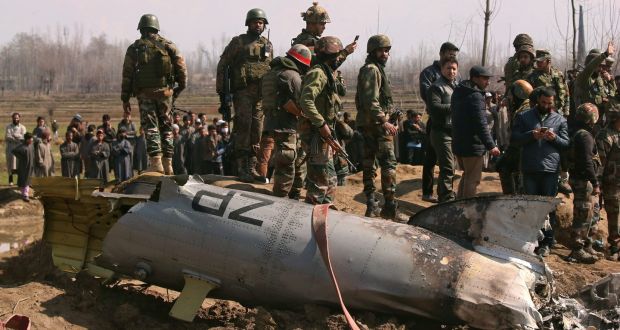 When Pakistan came into being on August 14, 1947, under the sagacious leadership of Quaid e Azam Muhammad Ali Jinnah, Indian leaders didn’t reconcile with moth-eaten Pakistan that had been treacherously slashed by the conniving Mountbatten and Radcliffe. They considered it as vivisection of Mahabharata. Believing in Chanakyan tactics of telling lies, indulging in intrigues and deception, befriending enemies of the enemy, and the policy of cloak and dagger.

They initiated multiple prongs to keep Pakistan politically unstable and economically weak with the ultimate aim of undoing it or making it a vassal state of India. In accordance with the British brokered Partition plan on June 3, 1947, Princely States of Kashmir, Junagadh and Manawadar were to become part of Pakistan.

In violation of this agreement, these three States were forcibly annexed by Indian forces. Kashmir became the bone of contention and bedeviled Indo-Pak relations and led to never-ending antagonism.

In violation of this agreement, these three States were forcibly annexed by Indian forces. Kashmir became the bone of contention and bedeviled Indo-Pak relations and led to never-ending antagonism.

Indian Congress leaders also supported Kabul when it raised the issues of Durand Line and Pashtunistan. They instigated Afghan rulers as well as National Awami Party led by Ghaffar Khan in Frontier Province to keep drumming up these issues. Rebellious Baloch leaders desiring independent Baluchistan and GM Sayed in Sindh having separatist tendencies were also kept in the loop of Indian intelligence agencies.

Read more: A master plan to balkanize Pakistan – Part I

After cutting Pakistan into two in 1971 under an international conspiracy, and subjecting Pakistan armed forces to worst ignominy, India has been making use of same tools of military/economic/political/diplomatic coercion coupled with sabotage and subversion to further unravel Pakistan. To this end, RAW was again mandated in 1973 to subvert people of Sindh and Baluchistan as it had successfully subverted the minds of Bengalis in erstwhile East Pakistan with the help of Sheikh Mujibur Rahman and his cohorts to create Bangladesh.

The US, India, puppet government in Kabul installed by the USA became strategic partners, while Pakistan was outwardly befriended by the USA to fight the war on terror, but in reality was a target of the trio.

In Sindh, GM Sayed and his ilk were extended full support in their Jeeay Sindh movement directed towards the creation of Sindhu Desh. Later on, new Sindhis (Mohajirs) were instigated to chant socio-economic grievances. When ZA Bhutto as the PM made Sindhi a compulsory subject and introduced a quota system in Sindh, Indian spy operators further fueled the Mohajirs perceived grievances.

With the emergence of MQM in 1984, by late 1980s the old and new Sindhis were locked in an everlasting ethnic war and led to rural-urban divide. Sindh became a wounded province of Pakistan. The MQM supremo Altaf Hussain wanted to gain complete control over the port city of Karachi and Hyderabad as well as other urban centers of Sindh. He and his confidantes aspired to detach urban Sindh and make it into a separate State for the Mohajirs (Urdu speaking community).

Read more: An overview of Pakistani politics from 1947 to Gen. Zia

Others who opposed this concept formed MQM Haqiqi under Afaq Ahmad and Amer Khan in 1991. Two major operations had to be launched in the 1990s to rein in the militancy of MQM. In Baluchistan, the rebellious Baloch Sardars grousing over socio-politico-economic grievances were given full support by RAW as well as KGB and KHAD, the three conniving partners, during the insurgency in the 1970s.

Pakistan’s influence in Afghanistan also expanded after 1979 when Gen Zia decided to support the Afghans resistance war against the Soviets. All the seven Mujahedeen groups leaned heavily upon Pakistan.

Like the Bengalis who were brainwashed to hate the Biharis, the minds of Sindhis and Mohajirs were conditioned to hate each other. The Baloch were indoctrinated to hate the settlers in Baluchistan. Similar to the Bengalis, the minds of Sindhis, Mohajirs and the Baloch were poisoned against the State in general and Punjab and Army in particular. Their antagonism was further stoked in the wake of Baloch insurgency in which the army was used by ZA Bhutto to quell it, and in the aftermath of the hanging of ZA Bhutto in April 1979 during Gen Ziaul Haq’s regime.

India increased its influence in Afghanistan during its occupation by Soviet forces from 1979 till the ouster of Karmal Babrak regime in 1991 and takeover by the Mujahedeen. Between 1991 and 2001, while ethnic fault lines in Afghanistan deepened, the influence of India in Afghanistan waned radically, but it got closer to enervated Afghan Northern Alliance holding a toehold in Panjsher Valley and its patron Iran.

Read more: The US failed Afghan policy – What should Pakistan do? Part-III

Pakistan’s influence in Afghanistan also expanded after 1979 when Gen Zia decided to support the Afghans resistance war against the Soviets. All the seven Mujahedeen groups leaned heavily upon Pakistan. Once the Taliban took over power in 1996, relations between the two neighbors warmed up further. This equation of friendship remained till the ouster of Taliban regime from power by the US-led coalition forces in November 2001.

Pakistan’s influence in Afghanistan also expanded after 1979 when Gen Zia decided to support the Afghans resistance war against the Soviets. All the seven Mujahedeen groups leaned heavily upon Pakistan.

After 9/11, the dynamics of Afghanistan-Pakistan region underwent a dramatic change. With the coming of pro-India Afghan Northern Alliance into power, Pakistan’s influence in Afghanistan began to decline rapidly and India’s presence increased substantially.

The US, India, puppet government in Kabul installed by the USA became strategic partners, while Pakistan was outwardly befriended by the USA to fight the war on terror, but in reality was a target of the trio. Pakistan Specific Objectives. Destabilize, secularize, denuclearize and balkanize Pakistan.

In accordance with an already well-prepared long-term plan, RAW in collusion with other anti-Pakistan intelligence agencies based in Kabul converted Afghanistan into a training ground and a springboard for training, equipping, brainwashing saboteurs and then launching them into Pakistan for carrying out sabotage and subversion at a massive scale. Huge funds were allocated and even drug money was used to conduct a hybrid war against Pakistan.

The rebellious Baloch Sardars grousing over socio-politico-economic grievances were given full support by RAW as well as KGB and KHAD, the three conniving partners, during the insurgency in the 1970s.

Proxies were cultivated in FATA, Baluchistan and urban Sindh to fight and pin down maximum numbers of security forces in the three conflict zones. Pakistan media which suddenly became the 4th pillar of the State during Gen Musharraf’s tenure was taken on board. RAW has been and is still making full use of Afghan and Iran soils to carry out covert operations in the selected combat zones of Pakistan that were peaceful till 9/11.

Besides the propaganda/psychological war to defame Pakistan, India is leaving no stone unturned to scuttle CPEC, paint Pakistan as terrorism abetting State, isolate it diplomatically, and strategically encircle it so as to enable Indian armed forces to unleash Cold Start doctrine that was made operational by 2008. India’s Strategic Encirclement Plan. The plan to encircle Pakistan was based on following parameters:-

At the same time, launch a vitriolic campaign against CPEC with the help of its pawns in Pakistan and build an impression that CPEC is Punjab specific and that it will wholly benefit China only and lead to erosion of Islamic culture of Pakistan.