What does International Law say about Kashmir? The author answers the question and also quotes M. Asghar Khan who wrote an interesting point, `It is on record that Vallabhai Patel, the powerful minister in Jawaharlal Lal Nehru’s government, had offered to Nawabzada Liaquat Ali khan in 1947, that Pakistan should keep Kashmir and let India have Hyderabad. This offer was then rejected by Pakistan’ as it thought it could retain both Kashmir and Hyderabad. 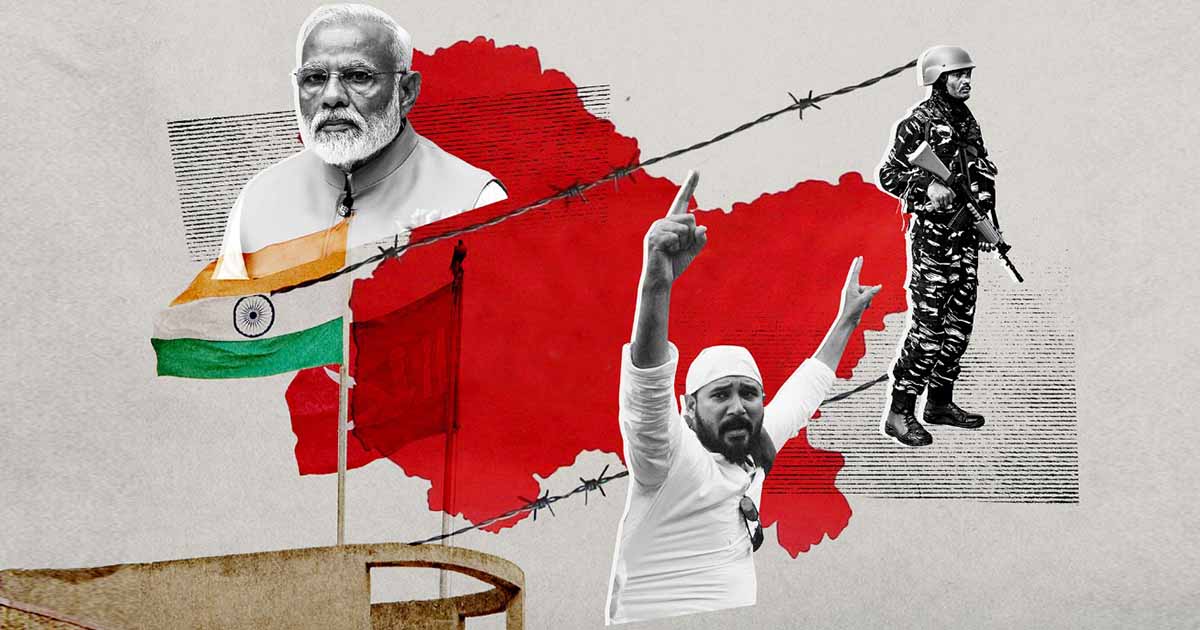 Kashmir: A jus cogen of international law is clasula pacta sunt servanda, that is to say treaties are to be abided by as they are binding on parties. The aforementioned golden principle shines only in law lexicons. Powerful parties to a dispute flout it on basis of another jus cogen, clasula rebus sic stantibus, `things as they stand’, or in common parlance, `a fundamental change of circumstances’.

Whither plebiscite in disputed state of Jammu and Kashmir or Palestinian State?

Perhaps, `might is right’ has always been at work in international relations. But, c’est dommage! International law outlaws it. Kautliya was righly said `matsy nyaya’ or `mach nyaya’,` way of the fish’, that is to say `big fish eats the small one.

India’s policy was no exception to matsy-nyaya principle. Since partition, Indian leaders have been flouting or abiding by treaties, at least verbally, in view of international environment. Just reminisce India’s diplomatic journey from commitment to holding a plebiscite to `annexing’ the disputed J&K State.

In initial years after independence, India never dared call Pakistan an aggressor in Kashmir conflict. The reason was that almost the whole world was aligned with Pakistan. That environment led to outcome of the plebiscite resolutions.

`Demilitarisation could not be effected because of India’s insistence on keeping 21,000 troops. The resolution called upon India to reduce its troops in Kashmir to a range of 12,000 – 18,000. Pakistan was required to reduce her troops to between 3000-6000 for internal security. Because of India’s obduracy, Kashmir could not be demilitarized as per UN Security Council’s resolution No 98 of 23 December 1952. Under the UN 12-point demilitarisation plan, Pakistan was allowed to keep, at gross disadvantage, only 6,000 Azad Kashmir forces.’

“Page 159. One is also bound to state, at this juncture, that throughout the endless deliberations of the Security Council on the Kashmir issue, the majority of the Council was closer to the Pakistan point of view than to that of India. Not only were its permanent members the United States, Great Britain, France, and China, with the Soviet Union largely neutral_ inclined to support a procedure acceptable to Pakistan rather than to India, but the elected members also, as they served their term, associated themselves with this same general position’.

‘Page 171-172. The Prime Minister of Pakistan agreed to take the first step to withdraw the Pakistan army. But Sir Owen’s gratification was short-lived. The plan for demilitarisation was rejected by India’.

‘Pages 176-177. Three proposals were suggested by the Australian Prime Minister, Robert Gordon Menzes: (1) to station Commonwealth troops in Kashmir; (2) to have a joint Indo-Pakistan force there; (3) to entitle the plebiscite administrator to raise local troops. Pakistan accepted any of the three propositions. India refused them all.’ Conspicuously, not Pakistan but India scuttled demilitarisation plan.

India’s gradual volte face on plebiscite: M. Asghar Khan (We have Learnt Nothing from History, p.240) says, `It is on record that Vallabhai Patel, the powerful minister in Jawaharlal Lal Nehru’s government, had offered to Nawabzada Liaquat Ali khan in 1947, that Pakistan should keep Kashmir and let India have Hyderabad. This offer was then rejected by Pakistan’ as it thought it could retain both Kashmir and Hyderabad.

Read more: Why did India turn down a travel request for members of the US government panel?

(b) Security Council disowned as just a non-binding mediator: Bhasin points out that `there was a perceptible shift in his [Nehru’s] stand on July 24 1952` about the future of the State _ if the decision of the Security Council was at variance with that of the Constituent Assembly’. Nehru said, `Unless the Security Council functioned under some other Sections of the Charter, it cannot take a decision which is binding upon us unless we agree to it. They are functioning as mediators and a mediator means getting people to agree (SWJ, Volume 19, page 241. Bhasin page 56).

(d) Security Council re-owned. Bhasin points out (page 57 op. cit.) `At the same press conference on 24 July, 1952 when asked what the necessity of plebiscite was now that he had got the Constituent Assembly, he replied “Maybe theoretically you may be right. But we have given them an assurance and we stand by it (SWJ: Volume 19, pp. 240-241. Bhasin p. 57).

Doklam contour: Doklam, or Donglang in Chinese, is an area spread over less than a 100 sq km comprising a plateau and a valley at the trijunction between India, Bhutan and China. It is surrounded by the Chumbi Valley of Tibet, Bhutan’s Ha Valley and Sikkim.

It flared up in 2017 when the Chinese were allegedly trying to construct a road in the area, and Indian troops, in aid of their Bhutanese counterparts, objected to it, resulting in the stand-off.

Doklam is strategically located close to the Siliguri Corridor, which connects mainland India with its north-eastern region. The corridor, also called Chicken’s Neck, is a vulnerable point for India.

Importance to India: While India-Tibet trade flourished along the Siliguri corridor and Chumbi Valley, Doklam had very little significance. Even during British rule, Doklam did not command much attention. In recent years however, China has been beefing up its military presence in the Chumbi Valley, where the Chinese are at a great disadvantage militarily. Both Indian and Bhutanese troops are on a higher ground around the Valley.

India, on behalf of Bhutan claims, Chinese troops came to the area with equipment to extend a road southward in Doklam, towards the Bhutanese Army camp near the Jampheri Ridge on on June 16, 2017. China controverts saying the ridge is its border with Bhutan. Around June 18, 2020, hundreds of Indian troops entered Doklam, ostensibly, at Bhutan’s request for intervention, and stopped the Chinese construction.

Importance to China: Doklam gives Chinese a panoramic view of the Chumbi Valley and the Siliguri Corridor. While avoiding escalation, the Chinese government released a map accusing India of trespassing into its territory. In the first week of August 2020, China said, “India has no right to interfere in or impede the boundary talks between China and Bhutan.”

Resolution of the dispute: Doklam, though not a part of India, has become a flashpoint due to India’s intervention. With stalled negotiations, the dispute is now intertwined with other Sino-Indian border disputes. India and China have one of the world’s longest disputed border areas, including 37,000 of uninhabited Aksai Chin and Arunachal Pradesh with 1.4 million residents and over 84,000 square kilometers.

India’s intrusion into Nepal territory: Following bifurcation of occupied Jammu and Kashmir into two union territories in December last year, India included some Nepalese territory including Kaala Pani into adjoining Indian held Kashmir. They built a new road in Uttarakhand which leads to territory that is claimed by Kathmandu, near the border with China. The road has strategic significance. But, India’s defence Minister Rajnath Singh in videoconference inauguration said `the road between Dharchula and Lipu Lekh will reduce the length of the Hindu pilgrimage of Kailash Mansarovar Yatra inside China by several days’.

In a lengthy statement, Nepal’s foreign ministry reminded India that Nepal claims all territories east of Mahakali river, “including Limpiyadhura, Kalapani and Lipu Lekh” as per the 1816 Sugauli Treaty”. It further pointed out that when India and China had agreed to include Lipu Lekh pass as a bilateral trade route in a May 2015 joint statement, Nepal had issued separate diplomatic protest notes to the two Asian giants for not obtaining Kathmandu’s consent. Nepal has not yet taken any legislative step to undo India’s intrusion.

Ladakh faceoff: On May 5, India and China clashed near the Pangong Tso Lake in Ladakh. The skirmish took place because the China had objected to Indian military patrols in the area.

The two countries have differing perceptions of Line of Actual Control. On May 9, at an altitude of 15,000 feet, in the Naku La region near Tibet, soldiers from both sides used fisticuffs and threw stones at each other. No arms were used but several dozen soldiers were injured, including a senior Indian officer who was required to be airlifted to a hospital.

Economic dimension of diplomacy: The 1988 compromise between India and China on Tibet situation was outcome of realization the two countries were near equals on the world stage. According to the World Bank, India’s gross domestic product, then, was $297 billion compared with China’s $312 billion that year, while India’s defense spending, at $10.6 billion, was also close to the Chinese allocation of $11.4 billion.

The economic balance of power between China and India has now changed since then. At $13.6 trillion in 2018, China’s GDP is now more than five times India’s $2.7 trillion. Similarly, China spent $261.1 billion on defense expenditure in 2019, almost four times India’s total of $71.1 billion. While India has risen as an economy and a global power in the past three decades, its relative strength to China has in fact substantially declined.

The Gandhi-Deng bargain paved the way for a number of border management agreements (including the 1993 and 1996 agreements related to confidence-building measures and the 2005 agreement on the political parameters guiding boundary negotiations). A rising China has stabilized its northern borders with Russia and is working to undermine the United States’ primacy in the East Asian maritime commons through the modernization of its military and its push to build islands. This basically leaves only one border issue, Sino-Indian border, unresolved. China appears to be in no mood to put up with India’s intrusions in future, even at cost of escalation, short of full-scale war.

Inference: As a pampered US proxy, India took many steps to flex its muscle. It carried out air strikes on Pakistan, altered status of disputed Jammu and Kashmir, annexed Nepalese territory, and intruded into Ladakh-Tibet territory.

It is persecuting Indian Muslim and has converted J&K into a prison (A.G. Noorani, Kashmir, a prison, Dawn January 12, 2019). It appears hard times lie ahead for India.

Mr. Amjed Jaaved is editor of the monthly magazine,  The Consul. He has been contributing free-lance for over five decades. His contributions stand published in the leading dailies and magazines (Global Village Space, Jehangir World Times) at home and abroad (Nepal. Bangladesh, et. al.). He is author of seven e-books including Terrorism, Jihad, Nukes and other Issues in Focus.

Will Turkey become a Peacemaker between Pakistan and India over Kashmir?

The sacrifice of Burhan Wani- One year on