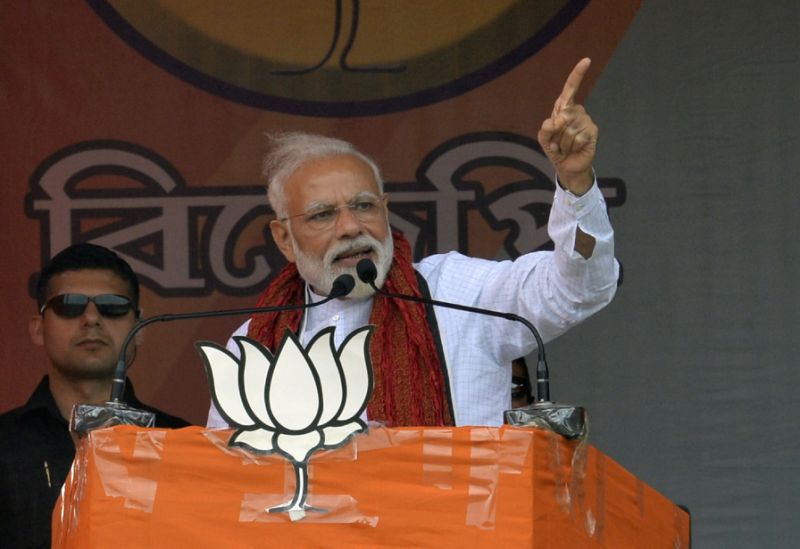 India’s ruling party and its main rival put the finishing touches to their election campaigns Sunday, sharpening their attacks before voting begins next week in the biggest election in history. There are 900 million Indians eligible to vote in the poll, which starts Thursday and lasts nearly six weeks, with results to be announced on May 23.

Prime Minister Narendra Modi is seeking a second term but faces opposition from Rahul Gandhi, the head of the Congress party, who is urging voters to look at the prime minister’s economic record and turf him out. But Congress faces a formidable opponent in Modi, with polling showing support for the Hindu nationalist leader is higher now than in 2014 when his Bharatiya Janata Party (BJP) won an outright majority.

Congress also unveiled its theme song, a Bollywood-inspired number by one of the Hindi film industry’s superstar composers, Javed Akhtar.

A survey by the New Delhi-based Centre for the Study of Developing Societies found 43 percent of respondents wanted Modi back as leader, compared to just 24 percent for Gandhi. The poll of 10,010 respondents, conducted in the last week of March and published Friday, found support for Modi was buoyed in part because of India’s airstrikes on Pakistan in February.

Modi picked up on the theme in West Bengal Sunday, telling supporters that before he took office in 2014 the government ignored advice from the army about striking India’s foes. “Now the situation has changed entirely. We now enter the homes of our enemies and kill them,” he told a huge crowd in the battleground state of 90 million, without mentioning Pakistan by name.

Indian fighter jets dropped bombs inside Pakistani territory for the first time in decades in February, after a suicide bomber killed at least 40 troops in the disputed Kashmir region. New Delhi said the airstrikes destroyed a training camp used by the militants behind the attack, something Pakistan denies and independent reporting at the site failed to prove.

The BJP also released a campaign song Sunday and television commercials, including some promoting the Pakistan strikes. Other material also alluded to dynasty politics — a thinly-veiled criticism of the Congress leader, who is a scion of the Nehru-Gandhi family.

There are 900 million Indians eligible to vote in the poll, which starts Thursday and lasts nearly six weeks, with results to be announced on May 23.

Congress also unveiled its theme song, a Bollywood-inspired number by one of the Hindi film industry’s superstar composers, Javed Akhtar. The track — released with the slogan “Justice For All” —  reinforces the opposition’s campaign message that Modi has mismanaged the economy for struggling farmers, unemployed youth and ordinary families.

“We advise Narendra Modi not to doubt the intelligence of the people of this country,” Congress spokesperson Anand Sharma told reporters in New Delhi on Sunday. “They remember what you promised in 2014. He should speak about the real issues.”

Gandhi has also targeted Modi on corruption, suggesting he has misled the public over a fighter jet deal to benefit a billionaire friend. “Your karma is about to catch up with you,” Gandhi posted on Twitter Sunday, challenging Modi to a debate on graft.

But the same poll by the Delhi-based think tank found Congress had not gained traction over the issue, and voters were not broadly aware of Gandhi’s promise to pay a minimum guaranteed income to India’s poorest citizens, a signature election pledge. Congress ruled India for much of its modern history but was reduced to a rump in 2014 when the BJP won the first outright majority in India in decades.

AFP - 21 September 2021
The US froze $9.5 billion in Afghan central bank assets, wary of providing money that could be used by the Taliban. However, Pakistan said freezing assets is not going to help as the most urgent priority was averting an even deeper economic collapse.

Japan heatwave kills over a dozen, 12,000 rushed to hospital