Indo-Iran ties and implications for Pakistan 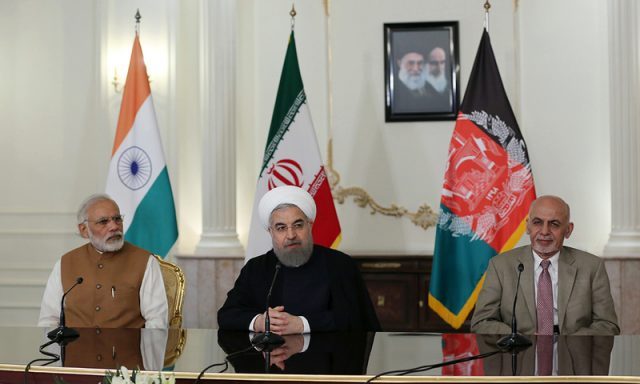 The Iranian foreign minister, Javed Zarif, is all set to visit Pakistan for a three-day tour beginning from Sunday, the Iranian ambassador said on Friday.

Mehdi Honardoost, the Iranian ambassador to Pakistan, reported that Javed Zarif will arrive in Pakistan on Sunday, the 11th March. Meeting with other ministers including the prime minister of Pakistan, an address to the Institute of Strategic Studies in Islamabad as well as a meeting in an economic forum are all on the agenda. Zarif will also attend a meeting at an economic forum. This is the fifth visit by Javed Zarif to Pakistan since he became foreign minister in 2013. The Pakistani foreign minister had visited Tehran in September of last year.

The visit to Pakistan may prove to be significant, as it comes against the backdrop of Iranian Prime Minister Hassan Rouhani’s visit to India last month at the invitation of Narendra Modi. That visit could not have gone any better, from Delhi’s point of view. Although the Supreme Leader of Iran Ayatullah Khameini has talked about the ‘besieged’ people of Kashmir, comparing them to Palestinians, the Iranian Prime Minister did not even mention Kashmir in his three-day tour (February 15-17) to India. Instead, Rouhani opted to condemn terrorism ‘in all its forms’, a veiled reference to what Delhi sees as terrorist militancy in Kashmir. Relations between Iran and India have been growing, especially since the lifting of sanctions on Iran after the Iran Nuclear Deal. When sanctions were lifted, it opened the doors for India to expand trade with and investment in Iran.

Iran and India signed 9 agreements last month. The emphasis was on the strategic port of Chabahar, a likely competitor to Pakistan’s Gwadar. Previously, the Indian government has invested $500 million dollars for the development of Chabahar. The success of Chabahar will come at Pakistan’s expense, as countries in the region and around the globe seek to increase trade with the landlocked central Asian republics via a warm water port i.e. either Gwadar or Chabahar. Analysts have pointed out that the aim behind the development of Chabahar is for India to compete with China for influence in the region since Gwadar is being developed by China.

India has had its eyes set on Central Asian Republics for quite some time, as its Connect Central Asia Policy illustrates. Being a developing country, India seeks energy sources and CARS have a lot of untapped hydrocarbon reserves. Kazakhstan has 30 billion barrels of oil reserves while Turkmenistan has an estimated 265 trillion cubic feet of gas. India has previously been denied access to CARs due to tense relations with Pakistan, which controls the port at Karachi. NATO troops in Afghanistan also rely on Pakistan for shipments of supplies to Afghanistan. Now, India seeks to bypass Pakistan by developing Chabahar.

In addition to the port, India also seeks to develop the land-based trade routes to and from Central Asia. This includes the 218-km Zaranj-Delaram highway that connects the Delaram district in Afghanistan with the border of Iran. The Connect Central Asia Policy was officially pronounced in June 2012, although in a track-2 dialogue in Kyrgyzstan but the policy had been in the works since the 1990’s. If we look at all the roads and railways that will connect Central Asia to the port of Chabahar, a total of 7200-kilometer long land-based trade route needs developing for India to completely bypass Pakistan. India calls this amalgam of trade routes “The International North-South Transport Corridor” and claims it will add $170 billion to India’s GDP.

It is only in recent times that Iran and India have developed economic and perhaps strategic ties. Although diplomatic relations were established between the two countries in 1950, during much of the Cold War, the two had different interests. India remained “Non-Aligned” while Iran, under the Shah, was firmly in the Western camp. After the Iranian revolution in 1979, ties between Iran and India grew somewhat. They both backed the Northern Alliance against the Taliban regime in the Afghan civil war during the 1990s. They began seeing eye to eye on various issues in 2003 when a high-level defense delegation from Iran visited India. The development of the North-South corridor was also discussed.

India has successfully managed to maintain growing relations with Saudi Arabia and Iran simultaneously whereas Pakistan continues to maintain a balancing act. Growing ties between Iran and India directly affect Pakistan. Pakistan’s relations with Iran have grown to some extent only recently since the Iranian revolution. The Iran-Pakistan gas pipeline, whose development is stalling for the time being, arguably, is symbolic of the relationship between Tehran and Islamabad as both sides need to improve ties with each other but have failed to do so.

The visit of the Iranian foreign minister to Pakistan is a chance for Islamabad to address these concerns. Pakistan needs to increase trade with Iran, maintain border security and most importantly, sell CPEC and Gwadar. The Iranian foreign minister has expressed Iran’s interest in becoming part of CPEC. This is an opportunity for Pakistan to make sure Iran’s interests coincide with Pakistan’s interest and thwart Indian ambitions of completely bypassing and encircling Pakistan.

Previous articleFrom a star to an activist: Deepika Padukone
Next articleShoe and Ink attacks: Society’s descent into violence

16 September 2021
Previous articleFrom a star to an activist: Deepika Padukone
Next articleShoe and Ink attacks: Society’s descent into violence

Why did Army chief call to revisit the madrassa education system?

Environmental Degradation in Pakistan and its impact on Socio-economic development