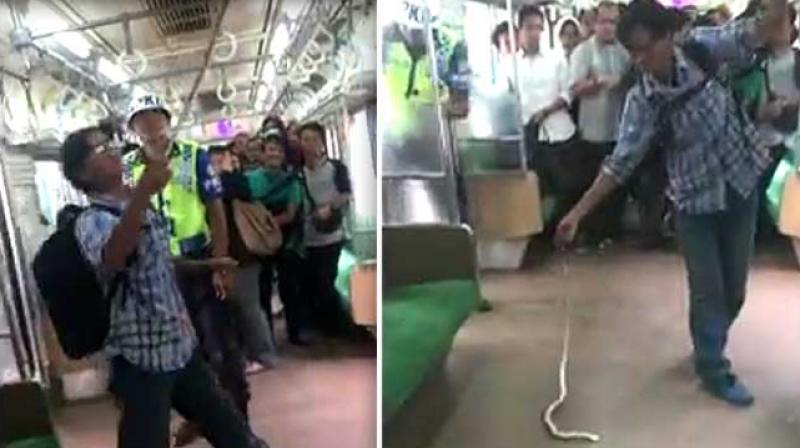 An Indonesian man who used his bare hands to kill a snake that was discovered slithering on a busy commuter train has become an Internet hero.

The train made an emergency stop after the reptile was spotted lurking on a baggage rack in a carriage headed to Jakarta from Bogor, south of the capital.

Smartphone footage, which quickly went viral, showed the bespectacled man casually snatch the snake’s tail and then smash its head on the floor in a violent whipping motion.

The creature was apparently killed instantly as shocked spectators — including a baton-wielding transit security officer — kept their distance.

Read more: Snake venom is a cure for heart disease patients: No aspirin,…

The unidentified man wearing a backpack then tossed its limp body, which appeared to be about one metre (three feet) long, out the door to waiting security staff.

It is not clear what kind of serpent it was, nor whether it was venemous. No injuries to passengers were reported.

Train operator KCI said the reptile is thought to have slithered out from a passenger’s bag.

“We regret the incident and apologise to train travellers who were disturbed by it,” spokeswoman Eva Chairunnisa told AFP.

It is not uncommon to see livestock or pets travelling on public transport in rural Indonesia, but passengers are prohibited from taking animals on urban transport lines.

Muhammad Ahmad Khan - 17 April 2021
Sovereignty bestowed to the nation-states was to make sure the political, religious, and social stability remains against each other. The difference in the identities...

Ghani Khan: A man from the future & a legend misunderstood