Ineffectiveness of SAARC and recommendations to make it effective 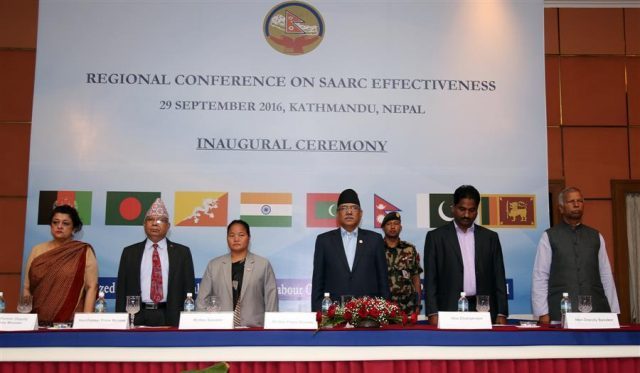 The cause of the SAARC’s institutional dysfunction can be traced in the Indian hegemonic designs and its indifferent behavior towards Pakistan and other small countries of the region.

The fundamental weakness that SAARC suffers from is the trust deficit among the member states. The political differences have had a deep negative impact on the political will to realize and work towards the economic cooperation and integration. Besides the political differences and conflict, economic factors have also played an unhelpful role. The member states except India have still not reached the take-off stage to be able to pursue the programme of economic integration and collaboration.

SAARC has always been dominated by India Pakistan issues but the truth is that SAARC countries are not even close neighbors – they do not enjoy close ties among themselves. India is central to SAARC, (and South Asia, geographically) sharing its boundary (land and maritime) with all SAARC nations, and the relations between India and other SAARC nations are the culmination of such bilateral relations.

SAARC’s inability to play a crucial role in integrating South Asia is often credited to the political and military rivalry between India and Pakistan. It is due to these economic, political, and territorial disputes that South Asian nations have not been able to harness the benefits of a unified economy

Although conceptualized to collaborate on common problems of member nations like low intra-regional trade, infrastructure, sustainable development and poverty alleviation, SAARC has failed to be effective and has turned dysfunctional. With this in mind,  the success of the European Union was facilitated by France and Germany, the two bitter rivals, coming together. In contrast, India and Pakistan, the two big rivals could not come to common terms.

SAARC charter doesn’t allow discussion of bilateral issues as a result of which the contentious issues continue to simmer and countries are not able to come forward. Tariff and non-tariff barriers have also played their role in keeping the level of integration low, especially since Pakistan hasn’t extended MFN status to India and therefore, with so many items been put under the ‘negative list’.

Failure to ensure single window clearance and removal of clumsy procedures resulted in high cost trade inhibiting the growth potential of the region. Additionally, the non-availability of adequate infrastructure in the form of roads and cargo/ship handling equipment has also hindered the progress. Further to this, due to same agriculture produce like Basmati rice in India, Pakistan and Bangladesh, the scope of trade is also inherently less.

SAARC should also seek free and preferential trading arrangements with other regional bodies, notably the EU and the ASEAN. It should also remain fully focused on the SAARC social charter to spread out its reach to the common man. The people of South Asia desire to have a peaceful, prosperous and secure future. The security can be obtained through sincere and sustained efforts to narrow the political differences. SAARC is the appropriate tool not only to build trust but also to solve disputes and create conducive climate for the realization of SAARC charter. (DAWN: 2010)

The goal is to create peace by creating interdependency between conflicting states and within a certain region like the South Asian region, to resolve and prevent conflict. This interdependency is needed to create a long period of peace in which both sides can look forward to cooperating with each other in the future. They can do this by creating agreements such as trade agreements that can eliminate trade barriers within the region, to make it easier to trade along with disbarment agreements to disable or reduce nuclear weapons.

There is a need to focus on small politics instead of big politics to resolve conflict in conflicting regions. This would mean that they focus on economic cooperation and other small ways that can create cooperation and more peace without touching the hot topics such as the Kashmir region and security issues between Pakistan and India. The problem with this is that Pakistan and India will not be likely to do or they will do it in a limited manner like they have been doing.

SAARC cannot be effective unless it places itself on a managerial position to achieve regional order, forcing all the members to act mutually in making the region a ‘zone of peace’ and the center for world business.

Moreover, the bilateral issues between member nations should be resolved. Bilateral Issues between India- Pakistan, India- Sri Lanka, Pakistan- Afghanistan etc. must be improved with serious engagement and collaboration – working together to bring peace and stability as a common good in the region. Therefore, information on terrorism, trafficking, smuggling etc. must be shared and joint exercises must be conducted to build mutual trust and capability.

Lastly, the SAARC needs to work on Improving infrastructure and regional connectivity – Collaboration in scientific research, universities exchange programs, tourism etc. will have a positive effect on relations among countries.

SAARC has the potential to transform the South Asian Region. Mutual mistrust and non-cooperation should not be allowed to undermine this potential. SAARC should function as an autonomous institution by which driving principles, strategic actions, and rules of law can be implemented in a way that is relevant to both, its own members and other rising powers.

Bhakhtawar Liaquat is a political analyst and is also a human rights activists. The views expressed in this article are author’s own and do not necessarily reflect Global Village Space Editorial Policy.

Only solution to Afghan problem: US Withdrawal