‘Insha‘Allah Democracy’: A documentary on Musharraf screens in Pakistan 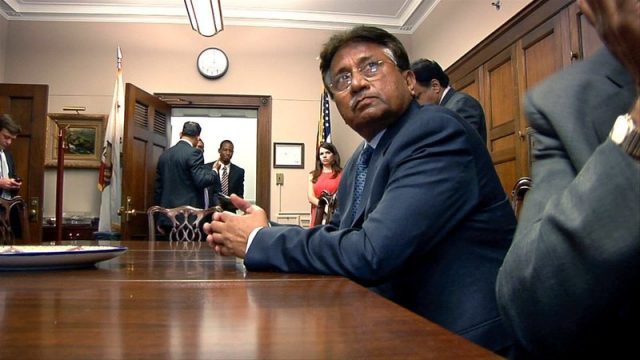 ‘Insha’Allah Democracy’, a political documentary on the life of former President General Pervez Musharraf was screened in Karachi on Sunday, 24th March. The film is directed by Pakistani-Canadian director Mohammad Ali Naqvi.

The film has explored at a deeper level the political landscape and evolution of democracy in Pakistan. Director Naqvi has staged the documentary in the context of the question that will Democracy prevail in Pakistan in long-run. The film proves to be a highly informative piece for a first-time voter who is oblivious of the political setup of Pakistan.

While explaining the construct of the movie, Naqvi has explained that documentary is the chronicle of his personal understanding and exploration of democracy in the lead up to 2013 general elections.

The works on the film began in 2010 and during this time director, Naqvi has unobstructed access to the running candidates for elections including former President General Pervez Musharraf, who was in self-imposed exile in Dubai.

Read more: This documentary on Junaid Jamshed will surely leave you in tears

“When I began the film I had this idea in my head that it would be a simple comeback story reminiscent of Richard III where you have this Shakespearean former leader [Gen Musharraf] ridiculed in irrelevancy and trying for a comeback and dealing with his own demons and it was more of a tragic piece,” he said talking to the audience after the screening.

“That is kind of what I was going for, but when I actually started filming and the more I saw…for me to actually ignore the footage I was getting was becoming more and more difficult. It wasn’t tragic, it was quite hilarious,” he added.

The film has also covered the political drama of Karachi in the 1990s and in fact, opens up with a sectarian attack in the city. The sectarian violence was then linked with post 9/11 political and social turmoil.

Naqvi said: “I hadn’t intended to put myself in the story and remember when I started the story I was all about Musharraf and thought yes, he is the best. Through the film, I actually go through a change myself and realize, I was wrong and that is what this film is about.”

He added: “If I just wanted to criticize Musharraf it would have been really boring…it wouldn’t be a narrative. He’s kind of a one-note guy…what was interesting is that my relationship was evolving and I was evolving in my own political consciousness so that became an intentional decision, but I didn’t arrive at that decision till the very end.”

“My film chronicles my own journey as a first-time voter in Pakistan – to see if democracy is compatible with an unstable country,” elaborates Naqvi. “After spending several years with Musharraf, I realized that the only effective way to challenge any negative political force is through deeper participation in the democratic process. Ultimately this is why I made Insha’Allah Democracy. I crave for Pakistan to find its own democratic voice,”

Gaining unprecedented access to Pervez Musharraf, Insha’Allah Democracy included a 31-second clip of a conversation between the former president and Jack Rosen, an American lobbyist and Chairman of the powerful American Jewish Congress.

Rosen asks Musharraf, “What do we have to change so that our money is used in a positive way to protect Americans from terrorism, from radical Islam [and] from Al-Qaeda. What’s gonna do that for us?”

To this, Musharraf replies: “All I’m saying is that I have certain credentials from the past. I need to come [to power] again and I need to be supported not overtly but in a covert manner so that we win again.” Another clip of the documentary shows Musharraf admitting the alleged negligence of ISI’s pertaining to the presence of the Al-Qaeda leader Osama bin Laden in Pakistan.

Insha’Allah Democracy has already been premiered worldwide and has been broadcasted on BBC Four. The documentary has been nominated for Youth Jury Prize and Best International Documentary at the Festival International de Programmes Audiovisuels.