Insurgencies in Iran, driven by poverty and discrimination 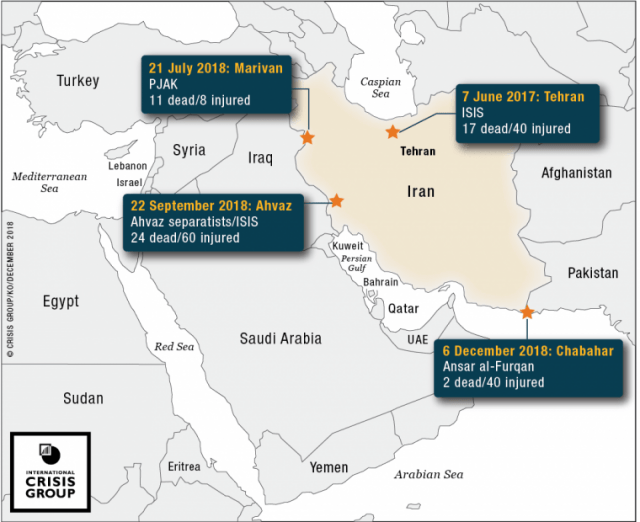 The Iranian government has long accused some of its neighboring states of using terrorism and insurgency to destabilize the country. There may be some truth to these accusations. But Iran’s treatment of minority groups has also contributed to the rise of militancy.

Immediately after the February 13 terrorist attack in the city of Khash in Iran’s Sistan and Baluchistan province, which killed more than 20 members of the Islamic Revolutionary Guard Corps (IRGC), Iranian authorities began pointing fingers at other countries, including Pakistan, Saudi Arabia, and the United Arab Emirates.

The population density in Balochistan province is low, perhaps due to its scarcity of water and mountainous terrain. Iran’s Baluch population is over 1.5 million.

The Baluchistan region is divided between Pakistan’s Balochistan province and Iran’s Sistan and Baluchestan province. This area has frequently seen the rise of violent insurgent groups. One of these—Jaish al-Adl (“Army of Justice” in Arabic), which was founded in 2012 by Baluch militant Salahuddin Farooqui and is believed to be based in Pakistan—took responsibility for the Khash attack. Jaish al-Adl has claimed responsibility for many abductions and deadly attacks against the Iranian military, the IRGC, and Iranian civilians in the past, including the October 2018 abduction of 12 Iranian border guards. Pakistan later freed some of these men, and they returned to Iran.

Iran has in the past accused Pakistan of being either unable or unwilling to confront Baluch militants, charges the Pakistanis deny. In response to the Khash attack, General Qassem Soleimani, commander of IRGC Quds Force, accused Pakistan of failing to take actions against the insurgents. Speaking to a crowd in the city of Babol, Soleimani addressed Pakistan: “You have the atomic bomb and you cannot destroy a terrorist group of only a few hundred members?” He accused the Saudis of investing in Pakistan with the intent of dividing and “destroying” the country.

Iran’s Foreign Ministry took a more diplomatic tone. Foreign Minister Javad Zarif stated that Pakistan had promised to do anything “to prevent similar acts.” This is not a good time for Tehran to threaten Pakistan, a neighbor whose friendship Iran needs more than ever before.

No evidence suggests that the Saudis directly finance armed groups in Sistan and Baluchestan. However, it is clear from other examples that the Saudis do fund anti-Iran militant groups. Additionally,  the Saudis have reportedly provided al-Qaeda’s Yemen affiliate with U.S. weapons.

Iran’s response to terrorist attacks has generally been violent, emphasizing executions and militarization. But these do not address the causes of Baluch militancy.

Insurgencies are not always driven by hatred toward the regime and establishment. Sometimes they’re driven by poverty. The Baluchistan region is extremely underdeveloped and poor.

More than 12 million Baluch are spread across Iran, Pakistan, and Afghanistan. About 60 percent of them live in Pakistan’s largest province, Balochistan. The population density in Balochistan province is low, perhaps due to its scarcity of water and mountainous terrain. Iran’s Baluch population is over 1.5 million.

The Baluch in both countries share ethnic, cultural, and religious similarities, and have always kept their economic and political links as well. However, they may not necessarily have the same demands. In fact, separatist urges have been stronger among Pakistani Baluch than among Iranian Baluch. In Iran, the main issue for the Baluch is religious freedom, as their Sunnism is not protected in Iran as it is in Pakistan. Iranian Sunnis, for example, are often denied permission to build mosques in majority Shia cities.

The insurgency along the Pakistan-Iran border is not a new phenomenon or something created in post-revolutionary Iran. This region has long been subject to unrest and insurgencies. Prior to Iran’s 1979 revolution, the regime of Shah Mohammad Reza Pahlavi, fearing anything to do with the Soviets, helped Pakistan crack down on left-leaning Baluch nationalist movements.

In Pakistan, where the poverty rate in Balochistan rose to 71 percent by 2016, the issue for the Baluch people is marginalization. Plans to develop Pakistan’s Gwadar port and Iran’s Chabahar port are intended in part to develop the regional economy and alleviate this poverty. Molavi Abdul-Hamid Ismaeelzahi, a very well respected Sunni religious leader and the Friday prayer imam in Zahedan, a city in Iran’s Sistan and Baluchestan province, told Anatoli News Agency that “in Sistan and Baluchistan region, there is privation, unemployment, and poverty.

If Iran can sit down with its former arch-enemy, the Taliban, it should be able to start dialog with not only Baluch religious and local leaders, but also some Baluch insurgent groups.

Developing Chabahar [port] can transform this city and the province.” He went on to say: “We emphasize the participation of the people of Sistan and Baluchistan, especially in Chabahar. People need to have education and training to be able to participate in the development of the region.”

Insurgencies are not always driven by hatred toward the regime and establishment. Sometimes they’re driven by poverty. The Baluchistan region is extremely underdeveloped and poor. Broad and widespread discrimination is also an additional factor in alienating young people.

The Iranian government has often viewed the Baluch, and other ethnic and religious minorities, as a fifth column working for Iran’s enemies. Even if foreign adversaries are attempting to fuel tension and unrest inside Iran, the Iranian government nevertheless bears some responsibility for the situation in Baluchestan. It’s not just money that creates suicide bombers. It’s also hopelessness and feelings of isolation.

Condemning the terrorist attack on February 13 “in the strongest terms,” Molavi Abdelhamid stated, “without doubt, this kind of act will harm the people of Sistan and Baluchestan’s longing for security and peace.”

If Iran can sit down with its former arch-enemy, the Taliban, it should be able to start dialog with not only Baluch religious and local leaders, but also some Baluch insurgent groups. There is no better weapon the Iranian government could use to neutralize foreign powers who want to destabilize it than easing tension with its minority groups and working to reduce unemployment, decrease poverty, and end discrimination.

Fatemeh Aman is a nonresident senior fellow in the Atlantic Council’s South Asia Center. @FatemehAman. the article was originally appeared in LobeLog.com and has been republished with the author’s permission. The views expressed in this article are author’s own and do not necessarily reflect the editorial policy of Global Village Space.

Sugar import to set back Pakistan a whopping $110 million

News Desk - 27 July 2021
A recent meeting of the Economic Coordination Committee has decided to import 200,000 metric tonnes of sugar to build strategic reserves as countermeasures because the government expects speculative forces to drive the price up. Rs18 billion has been set aside for the import of the necessary sweetener.

Sugar import to set back Pakistan a whopping $110 million