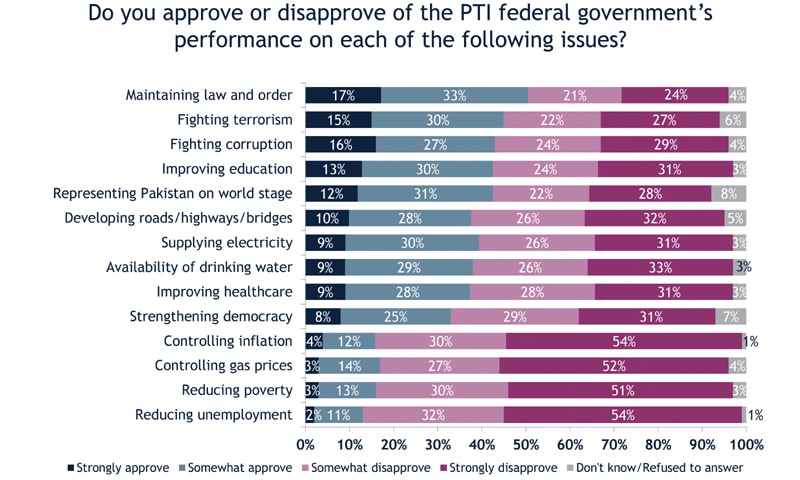 Islamabad – Four Days ago, Pakistani newspapers, quoting Associated Press of Pakistan (APP), Pakistan’s official news agency had reported of a new IRI Survey that proved that Pakistan’ PM Nawaz Sharif, with 63% approval ratings is the most popular politician in Pakistan with Imran Khan of PTI trailing much behind with 39% and PPP’s Bilawal Bhutto at third slot with 32% approval ratings.

Survey immediately lead to a political controversy in Pakistan. Ruling party PMLN’s leading politician and country’s defense minister, Khawaja Asif tweeted that IRI survey has proved what he has been saying all along that: Panama Case does not concern the common Pakistani.

Latest opinion polls have proved my stand,59 % people of Pakistan haven’t heard of Panama papers..it is not an issue of a common man

Have been saying all along Panama papers issue is not imp in public https://t.co/sgdeIdWh9t opinion polls endorse 59% r not even aware of it

Opposition leader from PTI, Naeem ul Haq, a former banker in New York and now a spokesman for Pakistan Tehrik-e-Insaf’s leader Imran Khan countered angrily, with his conspiracy theory, that International Republican Institute (IRI) is a CIA outfit to support ‘American stooges worldwide” and this survey has proved that Nawaz Sharif is a CIA or American stooge.

A quick glance at both International and Pakistani websites directly maintained by IRI reveal that all surveys from 2007 till 2012 are mentioned there. Not only the surveys but their reporting by media and discussion by commentators is present. So why this particular 2016/2017 survey is not present there begs an answer.

Most Pakistani papers have reported the surgery citing International Republican Institute (IRI), however none has given any link to IRI website or any press release from IRI. One paper, Business Recorder, has however cited APP, as source of the story. APP (Associated Press of Pakistan) is Pakistan’s Official News Agency, that had also reported, some days ago, that BBC has launched an inquiry against the reporter who had reported on BBC Online that London Apartments, of Hussain Nawaz have not changed any ownership in London land records since early nineties.

TV channels inquired from the English newspaper teams learnt that the story of the IRI survey was indeed released by APP and some claim, on the condition of not being named, that it was followed by urgent phone calls from important places for immediate publication. Reporters of tv channels and newspapers believe that this IRI survey was conducted by some local affiliate of IRI, inside Pakistan in Oct 2016 and its results were only shared with the Prime Minister’s Office. Apparently this was part of the IRI Global Outlook. However its not clear if International Republican Institute (IRI) conducts “secret surveys” for governments and if its not “secret” then why it has not been reported on IRI’s international and Pakistani websites.

Rap Song ‘Wrap my Hijab’ is breaking the internet