Pinki as she was known to her father, became at the age of 35, the first woman to become Prime Minister of a Muslim country. A frail woman who had witnessed the pain of living through the death of her idealized father and her exiled brother, spent over 5 years of imprisonment and later during her own government the death of her second brother and who was ultimately killed by terrorists herself.

Fate was such that Benazir who had aspired to join the foreign service before her father’s execution, was ultimately propelled into the highest seat of power in the country. Despite facing criticism for being politically inexperienced when elected into office in 1988 and subsequent allegations of corruption; she remained popular domestically and with her western aficionados. 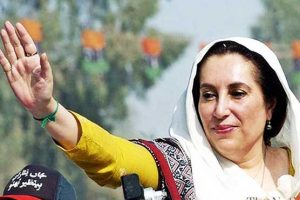 She was seen as a champion of democracy and women’s rights, though she did very little for the latter. She defined Pakistani politics and its resistance to military rule from the 1980’s until her death. Benazir faced constant character assassination from opposition political parties, the PML-N leadership smeared her by calling her a ‘yellow’ taxi suggesting she had loose morals. She was known to cry over these words sending emissaries to Nawaz Sharif asking him to stop calling her that and to attack her on her policies.

The mullahs on the other hand sent emissaries to Saudi Arabia, to try and get a fatwa against a woman leader of a Muslim country. However, both periods of her government saw a declining economy, little legislation, pressure from a strong provincial government in Punjab and security issues in Sindh; alongside this charges of corruption dogged her through her political career.