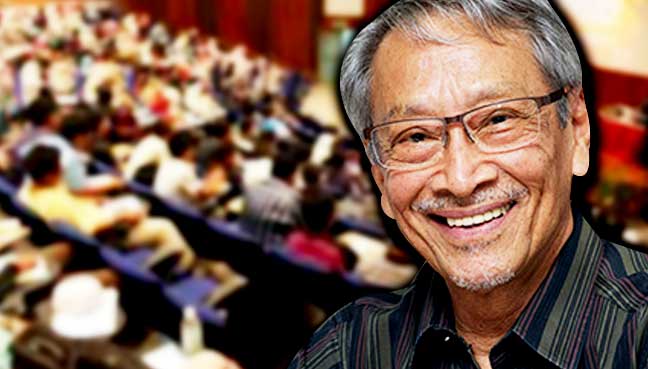 Tan Sri Dr Omar Abdul Rahman was the science adviser to the former Malaysian Prime Minister, Dr Mahathir Mohamad for 16 years. He has a tremendous contribution to the Malaysian ecosystem for science and was instrumental in creating the first National Science and Technology Policy of Malaysia in 1986. We were lucky to have him as a presenter at the USIM-COMSATS international workshop on foresight and innovation held in Malaysia from 10-14 May, 2018. He graciously agreed to give some time for an interview and the excerpts are given below.

Umar Sheraz: Dr. Omar Abdul Rahman, Thank you very much sir for taking out the time for this interview. You were the science advisor to the Prime Minister for 16 years. Do you think that in the current times a science advisor has a role to play or is it just a position which exists for the status quo?

And he himself wanted advice on issues that he was interested in. So both the ingredients co-existed, the capacity to advise and the capacity to receive advice. I served as a science advisor to Dr. Mahathir for 16 and half years. We had a very good team in place and whenever Dr. Mahathir asked for any advice on an issue I was lucky that I could consult and get information from the scientific and different organizations and we worked in cooperation.

The reverse is also true. Sometimes the scientific community came up with different issues or themes on which they wanted government intervention and they used to approach me to talk to doctor Mahathir and we used to set up a policy and present it to him and this then used to go to the Cabinet. So this kind of interaction used to get different issues addressed. That is why some people refer to that time as the golden age of science in Malaysia.

Dr. Omar: I believe that if you want to get something relevant to Science and Technology done you need to have what is called the human resource pyramid. It is most important that you have somebody at the top who is the champion of your cause. The higher the level of the champion the better chances of that cause being successful and the champion then needs an advisory body.

The advice can come from an individual or it can be from a body of knowledge of scientists or a science academy or a combination. Then below them you need the policy implementers and the policy planners; people who will actually put your plans into action. At the same time you also need a group of people to popularize your ideas so that they can have public appeal and they can be accepted by the public.

I feel that in a lot of developing countries a lot of these ingredients are missing. What I see happening in the developing world is that there are a lot of advisory bodies but they have a scattergun approach and they do not have a focus. If you have policy advice but you do not have a champion at the highest level than you cannot get the ideas into implementation. If you have a champion for your cause there is a disconnect or a gap with the policy implementers and the policy planners and this leads to failure.

Umar Sheraz: In your presentation today you stressed a lot on the need for creating the capacity to accept advice from advisory bodies. How do you create this capacity especially in government and policy makers?

Dr. Omar: This is where the thinking about the future roles comes into play. Universities and other organizations, where knowledge is created need to realize that it is now their duty not just to create knowledge but also to disseminate this knowledge. They need to be part of policy dialogues which could be one very important way in which they can influence change and also create the capacity to actually listen to advice.

Right now policymakers do not give universities a lot of importance because they think that the research which is created in the universities has no linkages with real life problems. I think this is a very important element which is still missing in a lot of OIC member states. The lack of willingness of knowledge creating Institutions and universities to actually go ahead and conduct a dialogue with policymakers. We all have science academies in our countries.

We have one in Malaysia and I know that you have one in Pakistan as well. But how well connected are these science academies with policymakers? Our science academies have essentially become the meeting place of scientists who have no connection with the problems of the countries in which they are located. The American Academy of Sciences presents the State of Science presentation to the Congress at least once in an year. This presentation is then debated within Congress and policies are made on the basis of this informed evidence. We do not have such a mechanism in many OIC member states.

Umar Sheraz: In your presentation, you rightfully mentioned that our politicians talk about the economy and about socio-economic development but rarely do we hear them say something about science, technology and innovation. My question is that as scientists and Academics have we done our job properly as well to sensitize the politicians and the policymakers on the need for science and technology and how that can lead to social economic development?

Dr. Omar: It goes back to what I talked about a bit earlier. Our universities and other knowledge producing organizations have been involved in their traditional jobs. They still think of teaching as a job, some have moved ahead and work with the private sector but we still have not created the environment where talking to policymakers and being part of the policy dialogues is also one of the evolving job functions. Some universities are moving towards it but still there is a lot which needs to be done. Our economic success hinges on the ability to grab the opportunities offered in an ever-changing economy, not just economy but a knowledge-based one.

Dr. Omar: This is a very tricky question. A lot of times we ask people to attend certain workshops and to go to capacity building programs being hosted by influential organisations. But then the question is what is the trickle-down effect and what is the impact of attending such programs. Sometimes the impact of such programs is not immediate and the benefit would come in quite late.

Sometimes you come across situations or issues in your work and then you realize that you came across the solution in a training program perhaps years ago and it is then that knowledge and information could come in very handy. On an organisational level I believe that all capacity programs should have some sort of evaluation mechanism attached to them. Also, all people who attend such capacity building programs should go back to their organization and share with their colleagues and offices what all they have learnt in this capacity programs.

They can also identify issues which are faced by the organization and how the organization can move ahead using the knowledge which has been gained from these capacity building programs. It also boils down to the institutions and how receptive they are to new ideas. A lot of universities send their faculty for capacity building programs and when they come back they do not have in place the mechanism to actually learn from the new ideas. This mechanism of a learning organization is lacking in the developing world.

Mexico’s US trade deal a win-win for president-elect

Tillerson asks India to improve ties with Pakistan: too little too late