Intolerance in Pakistan: How to tackle the problem? 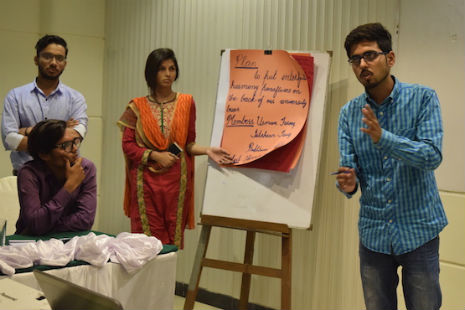 Just as Pakistan’s economy is grappling with the limited natural resources, the social structure is also struggling with the issue of intolerance. The good thing in solving the economic issues related to the natural resource is that the impact of its scarcity can be measured and reduced to numbers. Similarly, the remedies to fix this problem can also be expressed in numbers, as in what amount of water, gas, and power is needed to accommodate the populace.

When we talk about intolerance, it is usually referred to as “religious intolerance“ but the matter, in fact, is not only confined to religious extremism.

But what about this menace of intolerance, which is gradually taking root in the society? In recent years, the problem has shown some serious manifestation in extremely horrific incidences. Unfortunately, this is immeasurable and it is impossible to exhibit its impact in statistical figures.

Read more: How do you know if I am an extremist or a moderate?

Higher tolerance is indeed a guarantee of the prosperity of the whole society. Ample incidents can be cited to jostle the power holders in our political set up to initiate and bring up some concrete and viable policies before this, too, becomes an uncontrollable dilemma just like terrorism.

When we talk about intolerance, it is usually referred to as “religious intolerance“ but the matter, in fact, is not only confined to religious extremism. True that Mashal Khan murder case, Salman Taseer murder case and a few others of the kind can be categorized as religious intolerance but the everyday outburst on talk shows, exchange of offensive and inappropriate sentences between the opponents after the hearings of Panama Case within the premises of Apex court, and the day-to-day display of intolerance on every street of the country is definitely a different expression of the very same problem.

Intolerance is more of a psychological problem that directly paralyzes the sanity of the individuals and slowly poisons their attitude.

Unfortunately, the impositions of negative sanctions have failed miserably to put a full stop on such occurrences. Mumtaz Qadri, when punished for his crime, turned into a popular figure for a large fraction of society, thus resulting in many other incidents happening at different levels in the society.

This is an indirect message to all the stakeholders, policy, and lawmakers that though punishments seem to be a reasonable way to tackle such problems, there is, in fact, a need to recognize that intolerance is more of a psychological problem that directly paralyzes the sanity of the individuals and slowly poisons their attitude.

It is also evident that, instead of applying same traditional methods in tackling the issues, it demands some extra efforts and out of the box policies to overcome this problem.

How to tackle the issue?

A narrower approach would mean putting all the responsibility on the government and the state institutions. Demanding them to play their part is not unjust, but complete reliance on them would result in a tighter regime control as seen in the North Korea.

Read more: What is the government up to with Ramazan bill & PTA: Protecting sanctity or breeding intolerance?

In terms of Pakistan, the situation gets more complicated when political parties themselves have their social media cells which run abusive contents from their platforms against their opponents inciting more intolerance.

Why don’t political parties sometimes gather their supporters to teach tolerance rather than to promote their own political interests?

Intolerance comes from individuals and not from the institutions and, as a result, damages the individuals, not the institution. Therefore, the civil society, the layman, and particularly the traditional visual media should be the main entities to share a large burden in this realm.

Unfortunately, a serious determination to eradicate the problem is still absent. Everyday disturbing incidents occur, a few denunciations are made, and the very next day everything lays forgotten.

As far as Pakistan is concerned, there is a need for the political entities to first change their behavior and manifest the tolerance since they know the power and impact of their words and actions on their followers.

Why don’t political parties sometimes gather their supporters to teach tolerance rather than to promote their own political interests?

Media is a powerful tool in molding the attitudes of the masses; the brains in the media industry must now come up with some modification in their conduct where they see fit. Media can always run various campaigns to preach the general public and spread the message of tolerance all around the country. The civil society and the non-governmental organizations can also invest their time in this mission.

Intolerance is something which cannot be ignored as it can silently damage the hearts and minds of the people, resulting in an extremist, unhealthy nation.

Rida Hussain is a Master’s in Mass Communication from the University of Karachi with a keen interest to write on social and current affairs. The views expressed in this article are the author’s own and do not necessarily reflect Global Village Space’s editorial policy.

Assaults against US Muslims at highest levels since 9/11

‘Muslim unity against US’: Rouhani’s call at desperate times