Apple’s iPhone 12 continues to incite continuous leaks from tech enthusiasts. However, it seems that every week there is a new report that contradicts the previous one. New design? Possible delay? More cameras? Let's find out.

With quarantine in place, social media has started receiving a much larger traffic than usual. This means that more and more users are now paying attention their phones and gadgets. The coronavirus outbreak makes everyone dicey about the scheduled releases by big tech companies this year. However, one can’t deny that our curiosities still stand on the new iphone to be released later this year. The good news is that it looks like a genuinely impressive iPhone upgrade year.

Little birdies say that Apple will include a potentially game-changing long-range 3D camera to the upcoming iphone 12. After multiple leaks, the tech has now launched on the new 2020 iPad Pro line-up and it uses a combination of Time of Flight (ToF) and LiDAR sensors to almost instantly map its environment up to a distance of about 15 feet. Rival companies have used previously more basic ToF cameras for photographic improvements, which proved to be quite underwhelming. However, Apple is focusing this sensor on Augmented Reality (AR) – and the results look astonishing.

Everyone is expecting the iPhone 12 displays to change, but it is obviously the iPhone 12 Pro which will see the most surprising difference. Surprisingly, Apple is planning to reduce the size of its screen:

Apple might also use next-gen Samsung OLED panels (beyond those even used in the Galaxy S20 range) as well as 120Hz ProMotion refresh rates.

Ming-Chi Kuo is perhaps one of the most accurate Apple insiders out there. He says that Apple will have no significant price penalty for the step-up to 5G on the iPhone 12 range. This would be a big surprise given the premiums charged by competitor companies like Samsung; nevertheless, seeing Apple come out on top in terms of value could seal the deal for many potential upgrades this year. 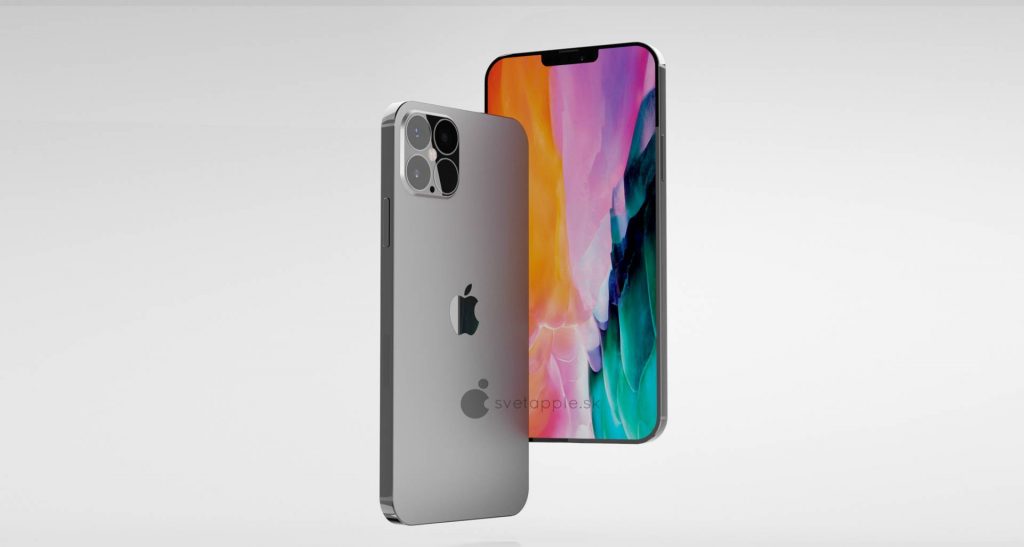 Customarily, Apple launches new iPhones every year in September. However, the current coronavirus pandemic makes everything uncertain. Supply chain reports are releasing contradictory reports daily but Apple is still silent on the subject.

Analyst Ming-Chi Kuo says that most of Apple’s upcoming phones are facing delays, despite reassurances from Foxconn that it’s making up for lost time. At this stage, it looks like we can expect a delay; but the iPhone 12 (and a budget iPhone 9 originally expected in June) should still launch before December.

A set of ‘concept 3D renders’ were released on Tuesday. They depict all the latest iPhone 12 rumors, including a recent report that this upcoming handset will have a substantially smaller screen cutout. These images were created by Róbert Hallon of svetapple.sk, who’s turned iPhone rumors into renders in the past.

The standout smaller notch is based on a CAD drawing tweeted out on Sunday by frequent Apple leaker Jon Prosser. It shows components of the iPhone notch packed closer together, suggesting that Apple has found a way to miniaturize them.

But this rumor’s been around for a while from a range of sources. If these unconfirmed predictions prove truthful, this will be the most significant change to the screen shutout since it debuted in the iPhone X in 2017.

Some of the new svetapple.sk renders include other expected features of the iPhone 12, like an Apple A14 Bionic processor and 6GB of RAM. And flat edges the iPad Pro.

YouTube channel EverythingApplePro and Max Weinbach have posted what they claim is a leaked design for the new handset, based on supposed CAD drawings. As expected, they suggest that the new iPhone will borrow design cues from the squared-off, boxier iPad Pro redesign. It also looks set to sport a slightly thinner profile, just 7.4mm thick next to the 8.1mm of the iPhone 11 Pro Max.

Much of what the video suggests reinforces existing rumors. For instance, the rear LiDAR sensor and form factor redesign have seen heavy speculation and reported on. However, there are still some new details in there that hadn’t been previously mentioned.

Some of the iPhone 12 rumors are minor. For example, the video claims the camera lenses will have a slightly increased diameter; and that the power button has been shifted slightly lower on the device. But others would be more noticeable.

The video claims that the SIM card tray is swapped to the other side of the iPhone. Where the old SIM card tray was positioned there is now a Smart Connector-style input. The iPhone itself is also going to be slightly wider and taller than its predecessor, with slimmed-down bezels, and totally flat glass. There is additionally discussion of how speakers could be up to 15% louder, and the camera bump could protrude slightly more.

It also says that new colors for the iPhone 12 will include light blue, violet, and light orange.

Some big news regarding the iPhone 12 Pro Max design thanks to @EveryApplePro and @MaxWinebach. What do you guys think? pic.twitter.com/EifALulrQm

Is this information legit?

Of course, all of this presumes authenticity of the designs shown; the video claims the design is 70% complete. However, some of the details clash with other reports. For instance, Bloomberg claims that the two higher-end iPhone 12 models will omit the notch, and will come in midnight blue.

What’s sure is that Apple plans to release a 5.4-inch iPhone, two 6.1-inch models, and a 6.7-inch Pro Max-style iPhone this year. Despite the coronavirus-induced problems in the supply chain, recent reports suggest these will debut in September and October.

Despite the subtle differences in design, the iPhone 12 still seems to be Apple’s more substantial upgrades in the past few years. It shows significant improvements to the cameras, connectivity and performance. The last two years brought relatively incremental updates since the iPhone X launched in 2017. Hence, this is potentially good news at a time when a little good news goes a long way.

Which Do You Think is Best Smartphone in the World? World Thinks its iPhone

Facebook ‘not aware of any abuse’ of data by phone makers