Iqbal: A philosopher of East & West; but misunderstood by most..! 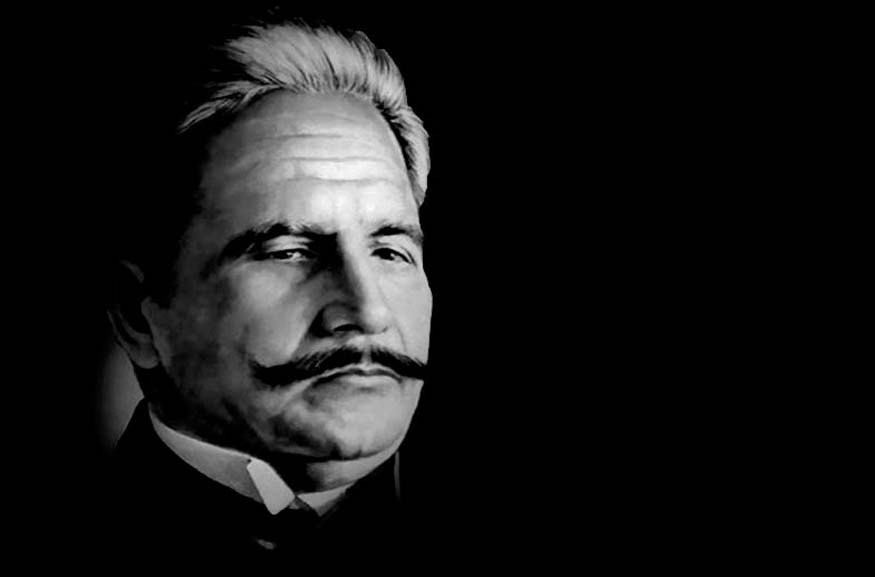 My first speech in school was about a man we call ‘The Dreamer and a Thinker’. I opened the speech with his famous verse:

I still remember myself along with my class fellows performing on ‘Lab pe aati hai dua ban k tamanna meri’ – Sir Iqbal’s another masterpiece – in school while celebrating Iqbal day. Yesterday when I was driving on Islamabad’s picturesque Faisal Avenue, I saw hangers and posters of Iqbal’s pictures along with his poetic verses. Reading those verses all the way home kept my heart rate faster than normal the entire time.

But it broke my heart into a million pieces when I realized that schools don’t celebrate the birthday of Iqbal or other such heroes anymore and on top of that we now don’t even have a public holiday to mark this legend’s birthday. Things have changed, priorities have changed. Schools would prefer celebrating Valentine’s day, mothers’ day, fathers’ day, Halloween and all sorts of days but would hardly pay any attention towards celebrating the occasions that are really important for us as a nation.

Allama Iqbal used to write in Urdu but later he realised that the Urdu language is limited for his boundless expression of thoughts, hence, he learnt persian which provided him with greater canvas to express himself.

Coming to know that a petition has been filed at Lahore High Court to reimpose a public holiday for this day gave me a little peace of mind. Though nothing has come out of it as yet.Allama Iqbal is not just an ordinary individual from the history. Sir Allama Muhammad Iqbal is as momentous as Quaid e Azam Muhammad Ali Jinnah is for Pakistan, as Lady Diana is for the United Kingdom or as Christopher Columbus is for the United States.

Quaid e Azam once said, “To me he was a personal friend, philosopher, and guide and as such the main source of my inspiration and spiritual support. While he was ailing in his bed it was he who as the President of the Punjab Provincial Muslim League, stood single-handed as a rock in the darkest days in the Punjab by the side of the League banner, undaunted by the opposition of the whole world.

Read more: Leadership requires: “Ask not what Pakistan can do for you, but…

When on account of his serious illness he was confined to bed, he resigned the post of the Presidentship of the Punjab League but was instead elected its Patron. He still continued to guide the work of the Punjab League from his bed and had somebody to reply to all letters concerning the League.

It would have been a matter of great satisfaction for him to hear the news with great delight that the Bengal and Punjab Muslims were absolutely united on the platform of the All-India Muslim League. In that achievement, the unseen contribution of Dr. Sir Muhammad Iqbal was the greatest. No greater blow has struck the Muslims at this juncture.”

Quaid e Azam once said, “To me he was a personal friend, philosopher and guide and as such the main source of my inspiration and spiritual support.

This free state of ours, that we breathe in today, was a dream of this visionary poet and philosopher. It was Iqbal who got the Muslims to start thinking about their future because he had sensed that Hindus and Muslims cannot live together. Today several people disagree with this philosophy of his. However, Iqbal was not just a poet or a scholar but a philosopher, a politician and a barrister as well. Thus, he had foreseen the legal and political implications for Muslims living with Hindus in the Subcontinent.

But why do we always have to disrespect our national heroes? Yes, I believe our Ministry of Interior in 2015 has disrespected Allama Iqbal by declining to declare a public holiday on the 9th of November every year. We have to learn how national heroes are honored.

Allama Iqbal wrote his famous ‘Shikwa’ (Complaint) and people started calling him a Non-muslim. When he wrote ‘Jawab e Shikwa’ (Answer) those very people started to say that its the ‘tafseer’ (translation) of Holy Quran.Our people are exceptionally judgmental. We lack nationalism. And we certainly didn’t learn from our ancestors how to love our land and regard our heroes.

Another recent incident of habitually disrespecting our heroes occurred when Dina Wadia – Quaid e Azam’s daughter – passed away. That was when the prominent twitteratis like Mehr Tarar and many others proved that they lack the decency of letting a dead person rest in peace even. They started tweeting about her and her father’s sour relationship without realizing that they were beating a dead horse and there was no point in this discussion at all.

Those twitter and so-called feminists tried to ridicule Quaid in the name of freedom and gender discrimination questioning why did he not allow his daughter to marry a Parsi when he himself was married to one?

Someone also just made fun of how Dina must have left this world with a burden of never coming to Pakistan to run a political party that her father once ran. I was stunned when I read this and was reminded of Fatima Jinnah and the elections of 1964. She didn’t want to contest the elections anyway but she was convinced by the politicians who viewed her as a strong candidate against General Ayub Khan.

She lost the elections and the general came into power. What harm did she cause to the country that she lose? Nothing at all. She was conspired against and made to lose. So if Fatima Jinnah being the iron lady in the freedom movement; being the sister of the Quaid who stood by his side in every hardship – was unable to fight the corrupt and make things right, I very much doubt that Dina would have gotten successful in the similar attempt of making things right.

Also, had Dina been in Pakistan, half of the people would have called her father a man with double standards and half of them would have ridiculed her for being the wife of a Parsi. Either way, she would have been the target of hostility and defamation.Not everyone is a power-hungry autocrat. Those were the legends who once ran a party just for the sake of running the state honestly and legally. Now it is just a fish market. No code of conduct, no ethics and certainly no moral values.

I remember our school’s principal always used to say that we celebrate birthdays of Iqbal and Quaid and other national heroes to make you all remember them and understand the significance of these personalities. Sadly, today we have drifted far away from our history.We really need to tell our younger generations that who Allama Iqbal was and what did he do. And for that, we can’t only rely on the schools since they aren’t doing much but are pushing our generations towards westernization instead of modernization.

Allama Muhammad Iqbal is as momentous as Quaid e Azam Muhammad Ali Jinnah is for Pakistan, as Lady Diana is for United Kingdom or as Christopher Columbus is for United States.

Only a great mind can recognise and regard another great mind – Like Mr. Jinnah on Iqbal day meeting in Lahore in 1941 said, “Iqbal was not only a great poet who had a permanent place in the history of the world’s best literature, he was a dynamic personality who, during his lifetime, made the greatest contribution towards rousing and developing of Muslim national consciousness.”

Rabindranath Tagore, a Bengali polymath, said that since Iqbal left us there is a vacuum which couldn’t be filled.Allama Iqbal’s work earned him a lot of notable fans like – Richard Nixon, Former President of the US – E. M. Foster, an English novelist – Sir Herbert Read, an English historian, poet and philosopher – Abdul Hassan Azzam, an Egyptian diplomat – Sir Thomas Arnold, a British historian and also a teacher of Iqbal – Nikolai Glebov, a prominent Bolshevik. And the list definitely doesn’t end here.

Allama Iqbal used to write in Urdu but later he realized that the Urdu language is limited for his boundless expression of thoughts, hence, he learned Persian which provided him with greater canvas to express himself. ‘Iqbaliat’ is an entirely separate discipline at universities and colleges not just in Pakistan but in other parts of the world as well (taught in their native languages).Allama Dr. Muhammad Iqbal has left a legacy behind him and it would be our loss if we remained unfamiliar with his commendable work.

Previous articleUS to Pakistan: no reimbursements if action not taken against LET
Next articleRawalpindi-Islamabad residents helpless as police fail to dislodge protesters from Faizabad Interchange

20 September 2021
Previous articleUS to Pakistan: no reimbursements if action not taken against LET
Next articleRawalpindi-Islamabad residents helpless as police fail to dislodge protesters from Faizabad Interchange

Corruption in Pakistan: A never-ending challenge

Should we have pride in our culture?