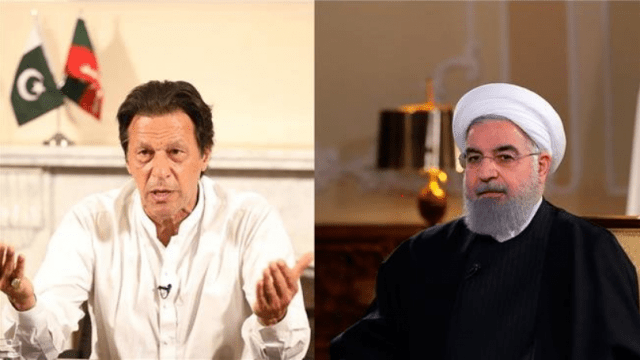 Iran’s President Hassan Rouhani received a phone call from Pakistan PM Imran Khan late in the evening on March 9, which was their first contact after the fedayeen attack near the southeastern Iranian city of Zahedan on February 13 that Tehran alleged as having been executed by terrorists from across the border.

What made Imran Khan’s phone call particularly significant was that he had received the Saudi Minister of State for foreign affairs Adel Al-Jubeir in Islamabad just the previous day. What makes it all very spicy, of course is that Al-Jubeir was also due to visit Delhi on March 11 and, importantly, the powerful Saudi Oil Minister Khalid Al-Falih will be traveling to Mumbai on March 16 on what can be called his second “demi-official visit” recently, notionally to attend the wedding of the the Indian industrialist Mukesh Ambani’s son at a grand ceremony on coming Saturday but also to touch base with the government officials in Delhi who are keenly promoting a mega joint venture between Ambani’s Reliance Industries and the Saudi Aramco.

Pakistan has been the turf of Saudi-Iranian rivalry in the past and the great game had abated somewhat in the recent years, but it can always rear its head again to rock Pakistan’s internal security.

Imran Khan called Rouhani at a juncture when the quadrilateral Saudi-Pakistani-Iranian-Indian geopolitical entanglement has acquired an unprecedented level of complexity with oil, blood, religion, and politics mixed up in it like nobody’s business.

Rouhani apparently came straight to the point telling Imran Khan that if terrorist groups based in Pakistan act against Iran, it will “undermine” the relations between the two countries and furthermore, that Tehran can identify the sponsors of these terrorist groups. In an oblique reference to Saudi Arabia’s hidden agenda to destabilize Iran from Pakistani soil, Rouhani added, “We must not let third parties to affect relations between Iran and Pakistan with these actions”.

Rouhani flagged that Tehran knows precisely the location of the Saudi-funded, Pakistan-based terrorist groups (and indeed has shared the intelligence with Pakistan). He said, “We are awaiting your strong action against these terrorists.”

No doubt, it was plain-speak — and rightly so. Rouhani’s remarks must be seen in the context of the growing impression in the region that Saudis have lately succeeded in cementing Pakistan’s induction into the anti-Iran “Arab NATO” mentored by the US by doling out big-time financial help to Islamabad. Indeed, what particularly worries Tehran is that the Saudis are establishing a long-term presence in Pakistan’s Baluchistan province bordering Iran through its seductive investment plans in and around Gwadar.

Imran Khan apparently sounded conciliatory, holding out an assurance that “very soon” he’d have good news for Tehran, which presumably signalled that some sort of Pakistani crackdown on the anti-Iranian terrorist groups could be expected. Interestingly, Imran Khan brought up a pending invitation from Rouhani to visit Iran. “I hope I can visit Iran soon,” he said. Rouhani responded politely that Tehran would welcome such a visit.

Pakistan must be wondering about the Saudi intentions. Considering that India is its existential enemy, Pakistan feels the need to balance by healing the wounds of the February 13 fedayeen attack near Zahedan.

What prompted Imran Khan to break the ice, as it were? Conceivably, Islamabad must have factored in that Iran might at some point act against the Pakistan-based terror outfit with or without Pakistani cooperation. Iran has intelligence presence within Pakistan. And if Iran too resorts to some “intelligence-led nonmilitary preemptive action” on Pakistani territory, as India recently did, it can create an ugly situation.

That might even assume sectarian overtones, given the subsoil tensions in the Pakistani society. Pakistan has been the turf of Saudi-Iranian rivalry in the past and the great game had abated somewhat in the recent years, but it can always rear its head again to rock Pakistan’s internal security.

Second, the ISI has wounded the IRGC and that could have grave consequences. Islamabad would have carefully noted the stern warning by General Qassem Soleimani, the legendary commander of the Quds Force, which spearheads Iran’s covert military operations abroad and has earned for itself a formidable reputation in Syria, Iraq, and Lebanon. Indeed, if Quds Force turns eastward at a juncture when Pakistan is dextrously navigating the Afghan endgame, that can create havoc for Islamabad’s best-laid plans in Afghanistan.

Third, the Saudi-Pakistani-Indian triangle has become “kinetic” lately. There is a disequilibrium developing insofar as Pakistan a tense relationship today with both India and Iran while Delhi has done well to de-hyphenate the India-Saudi ties from its cooperation with Tehran. This works to Pakistan’s disadvantage. Significantly, Rouhani took the call from Imran Khan just after receiving the new Indian ambassador Gaddam Dharmendra.

Pakistan is mortally indebted to Saudi Arabia today for the financial lifeline the latter has thrown at Islamabad. But then, Saudis have moved on to cultivate the Indian Hindu nationalist ruling elite as well despite their virulently anti-Pakistan, anti-Muslim ideology. They shrewdly assessed that Reliance, like the Pied Piper of Hamelin in the German legend, is capable of luring the Indian political elite.

After all, a former Pakistani army chief is helping the Saudis to create the so-called Arab NATO. When Imran Khan chauffeured the limousine bearing the Saudi prince, it carried a powerful message.

Besides, India is a serious proposition for the Saudis to make sound investments, given its business-friendly environment and the high returns. Make no mistake, Al-Falih represents the Saudi royal family at the Ambani wedding ceremonies in Mumbai. Suffice to say, if Reliance can persuade Modi to open up the highly lucrative retail sector in India’s due market, this may turn out to be a romance leaping out of the Arabian Nights.

Pakistan must be wondering about the Saudi intentions. Considering that India is its existential enemy, Pakistan feels the need to balance by healing the wounds of the February 13 fedayeen attack near Zahedan. But how far Iran feels reassured is another matter. Pakistan’s credibility is very low. The curtness in Rouhani’s remarks signals that Tehran remains on guard, given the past experience of Pakistan making empty promises even at the level of its army chief.

If anything, Iran’s scepticism would only have deepened lately. After all, a former Pakistani army chief is helping the Saudis to create the so-called Arab NATO. When Imran Khan chauffeured the limousine bearing the Saudi prince, it carried a powerful message.

Imran Khan’s call to Rouhani suggests that quite possibly, China cannot be happy, either, with the recent downhill slide in Pakistan’s relations with Iran. The Chinese foreign ministry account on the recent meeting between Chinese President Xi Jinping and the visiting speaker of the Iranian Majlis Ali Larijani emphatically made the point that Iran will remain a pivotal state in Beijing’s overall Chinese regional strategies in the Persian Gulf. The meeting in Beijing took place a week after the fedayeen attack in Zahedan.

What was Modi trying to establish by meeting Rouhani?

Massacre at Army Public School: Questions that continue to haunt?