Iranians mass for burial in hometown of General Qasem Soleimani

Iranians gathered in Kerman for the burial Tuesday of top general Qasem Soleimani in the final stage of funeral processions after he was killed in a US strike in Iraq. 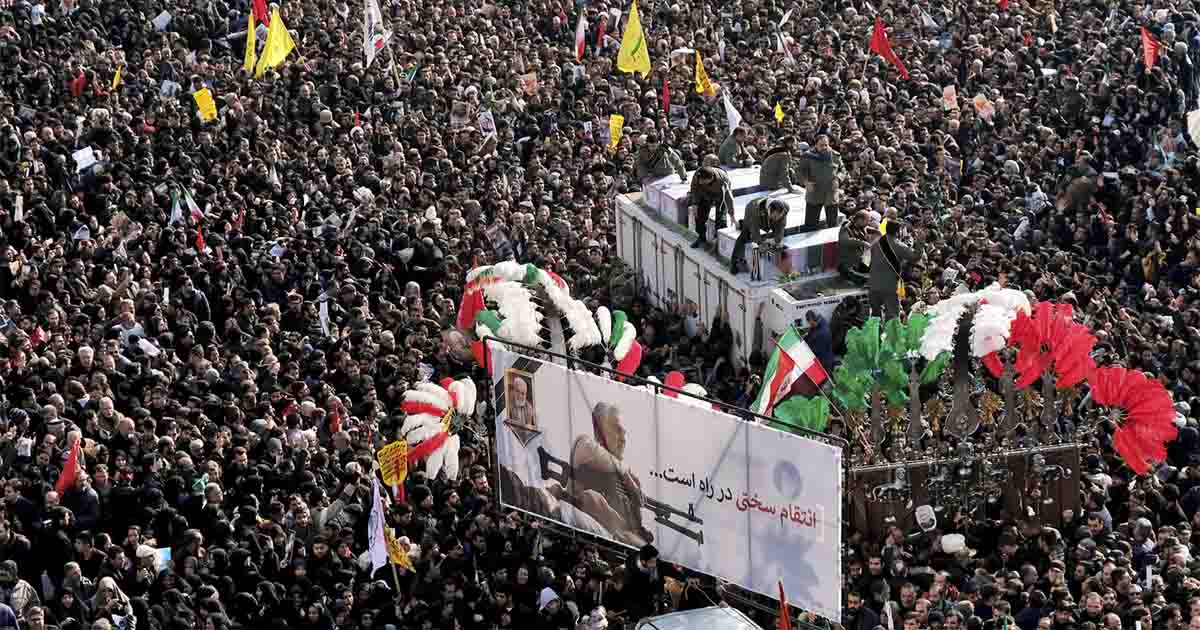 Iranians gathered in Kerman for the burial Tuesday of top general Qasem Soleimani in the final stage of funeral processions after he was killed in a US strike in Iraq.

The massive number of mourners in the hometown of the slain commander of the Revolutionary Guards’ foreign operations arm appeared to match the huge turnout seen in the cities of Tehran, Qom, Mashhad and Ahvaz.

A hugely popular figure in the Islamic republic, Soleimani was killed outside Baghdad airport on Friday in a drone strike ordered by US President Donald Trump, ratcheting up tensions with arch-enemy Iran which has vowed “severe revenge”.

“The enemy killed him unjustly,” the Revolutionary Guards’ top commander, Major General Hossein Salami said, adding the process of “expelling the United States from the region has begun”.

Today, millions of Iranians have taken to the streets of Kerman for the funeral procession of Martyr Qassem #Soleimani

This crowd shows that Major General Soleimani has been & will be the commander of hearts.#SoleimaniAssassination
pic.twitter.com/K8qocL0fZl

“Our will is firm. We also tell our enemies that we will take revenge, and that if they (strike again) we will set fire to what they love,” he told the sea of black-clad mourners. “They themselves know well what places I am talking about.”

Schoolgirls joined chants of “Death to Trump” from the crowd, an AFP correspondent reported. The assassination of Soleimani set off an escalating war of words between Iran and the United States.

In Tehran, President Hassan Rouhani on Monday warned Trump to “never threaten” Iran, after the US leader issued a US strike list of 52 targets in the Islamic republic. On Tuesday, Iranian lawmakers voted to designate all US forces around the world “terrorists” over Soleimani’s killing.

Parliament also agreed to bolster the coffers of the Quds Force, which Soleimani led, by $244 million (200 million euros).

#Tehran's famous Azadi Tower lit with images of #Soleimani ahead of burial pic.twitter.com/ed3uKI5vrl

In Kerman, people converged from afar on Azadi Square where two flag-draped coffins were on display, with the second one reportedly containing the remains of Soleimani’s closest aide, Brigadier General Hossein Pourjafari.

“We’re here today to pay respects to the great commander of the holy defence,” said one of the mourners who came from the southern city of Shiraz to attend the funeral in Kerman.

“Haj Qasem was not only loved in Kerman, or Iran, but also the whole world,” Hemmat Dehghan told AFP.

“The security of the whole world, Muslims, Shiites, Iraq, Syria, Afghanistan and especially Iran, all owe it to him,” said the 56-year-old war veteran.

Another mourner said Soleimi’s assassination “boils the blood of the Iranian people”. “He was seen as a great man who was ready to serve his people both then in the war and now. He must certainly be avenged,” said Sara Khaksar, an 18-year-old student.

Friday’s assassination of the 62-year-old Soleimani heightened international concern about a new war in the volatile Middle East.

Iraq’s parliament has demanded the government expel the 5,200 American troops stationed in the country in response to the drone attack which also killed top Iraqi military figure Abu Mahdi al-Muhandis.

LATEST: At least 35 people were killed and 48 injured as a result of a stampede at the funeral for Iranian general #Soleimani.

Here's the crowd currently gathering in his hometown Kerman pic.twitter.com/sd7TCraB2l

Baghdad requested in a letter to the UN — seen by AFP — that the Security Council condemn the US strike so that “the law of the jungle” is not allowed to prevail.

The operation represented “a dangerous escalation that could lead to a devastating war in Iraq, the region and the world,” wrote Iraq’s UN ambassador Mohammed Hussein Bahr-Aluloom.

"For evil people have no future; the light of the wicked will be snuffed out" (Proverbs 24:20) #Iran pic.twitter.com/v2HH4eTGwf

On Sunday night, the US mistakenly notified the Iraq of an imminent troop pullout in a letter that sparked confusion in Washington. “We respect your sovereign decision to order our departure,” said the letter, whose authenticity was confirmed to AFP by both Iraqi and US defence officials.

In the letter, US Brigadier General William Seely said the US-led coalition would “be repositioning forces”. But Pentagon Joint Chiefs Chairman Mark Milley said the letter was a mere “draft” that was sent by mistake.

Germany said Tuesday it was withdrawing some of its troops deployed as the anti-IS coalition in Iraq. NATO chief Jens Stoltenberg warned on Monday that Iran must avoid “further violence and provocations”.

#BREAKING
A number of mourners, who participated in funeral procession of Lt. General #Soleimani in hometown Kernan, died due to overcrowding pic.twitter.com/OpuuLggnLk

The European Union, whose foreign ministers will hold emergency talks on the crisis Friday, said it was in both Iran and Iraq’s interests to “take the path of sobriety and not the path of escalation”.

Read more: Qassem Soleimani’s assassination: Was it a plan to spread anarchy?

Saudi Arabia — an oil-rich US ally seen as vulnerable to Iranian counterstrikes — also appealed for calm after a “very dangerous” escalation. World financial markets have been on edge over the crisis.

“The new year has started with a bang in so far as volatility is concerned,” said Fawad Razaqzada at Forex.com. “This is mainly due to the escalation of tensions between the US and Iran after Trump ordered the assassination of Iranian military commander Qasem Soleimani.”

Is ultraviolet radiation the missing link in COVID cure?