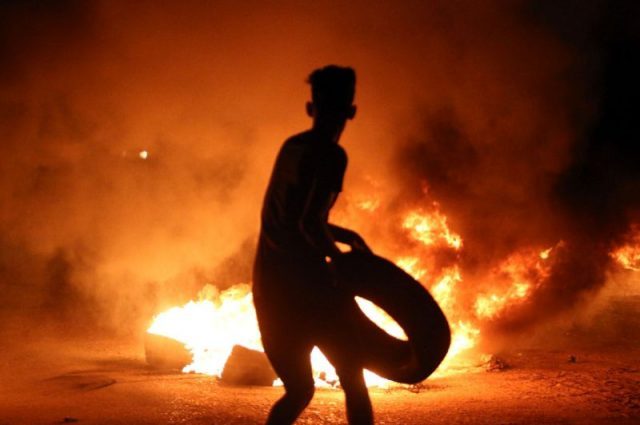 Iraqi Prime Minister Haider al-Abadi sought Friday to restore calm in the city of Basra after days of protests over unemployment, as demonstrations spread to other regions.

Abadi flew straight into the southern city from Brussels where he attended a NATO summit to discuss the Islamic State group, and immediately held talks with officials, a statement from his office said.

The protests erupted in Basra on Sunday and security forces opened fire, killing a protester which sparked further anger.

As well as unemployment, those involved are frustrated by rising living costs and a lack of basic services in the city, the capital of Basra province.

As Abadi met the governor of the oil-rich province and energy chiefs, Iraq’s top Shiite authority voiced support for the protesters.

“It is not fair and it is never acceptable that this generous province is one of the most miserable areas in Iraq,” Abdel Mahdi al-Karbalai, the representative of Grand Ayatollah Ali al-Sistani, said at Friday prayers in Karbala.

Karbalai urged the “federal and local government to deal seriously with the demands of citizens”, while also calling on demonstrators to refrain from violence.

“People are hungry, there is no water, no electricity,”protester Abdullah Khaled, 29, told AFP.

Protests spread northwards as well to other regions Friday as demonstrators took to the streets in the Dhi Qar, Maysan and Najaf provinces.

An AFP journalist reported several protesters were injured as dozens forced their way into the waiting room at the airport serving the holy city of Najaf despite a heavy police presence.

Several civilians and policemen were also injured in clashes around the governor’s home in the city of Nasiriyah, a medical source said.

Powerful Shiite cleric Moqtada Sadr, whose populist coalition triumphed at May elections on an anti-graft ticket, backed those on the street but rejected violence from both sides during the protests.

“We do not accept the aggression against the oppressed demonstrators, and we wish for the demonstrators to preserve public property because it belongs to the people and not to the corrupt,” he wrote on Twitter.

In an apparent first step to calm frayed nerves, Abadi in Basra ordered local officials to sort out “the legal status” of security guards employed by the interior ministry at oil facilities, his office said.

These guards receive no benefits and work without contracts unlike their peers at the interior ministry.

At a later meeting with local tribal leaders Abadi pledged to “spend the necessary funds for Basra, including on services and reconstruction”, a source close to the prime minister told AFP.

In a statement released by his office, Luaibi said the demonstrators failed to enter the area but had set fire to a gate and a security post.

Officially, 10.8 percent of Iraqis are jobless, while youth unemployment is twice as high in a country where 60 percent of the population are aged under 24.

Abadi has vowed to rebuild the economy, ravaged by years of conflict, but frustrations have been growing especially in the oil-rich south.

Iraq is the second-biggest producer of crude in the OPEC oil cartel, with 153 billion barrels of proven reserves.

Read more: Nearly a year since fall of Iraq’s Mosul, hunt for bodies…

The oil sector accounts for 89 percent of the state budget and 99 percent of Iraq’s export revenues, but only one percent of jobs as the majority of posts are filled by foreigners.

Iraq is currently in political limbo as the country looks to form a new government after populist Sadr’s surprise poll win saw long-time political figures pushed out by voters seeking change in a country mired in conflict and corruption.

Sadr has sought to form a broad coalition with rivals including Abadi, but the process has been complicated by the supreme court ordering manual recounts in areas where the vote was disputed.

Why we should support Imran Khan

Will al-Qaeda get habitation and a name in Jammu and Kashmir?