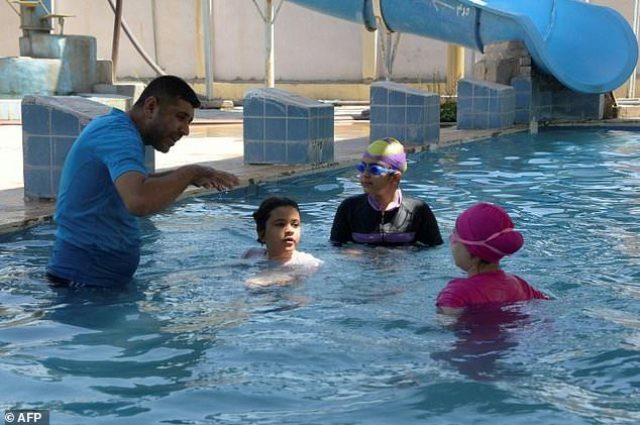 Her father and grandfather gained fame in the pool. Now, 12-year-old Rama Omar hopes to do the same — a bold move in Mosul, a former jihadist stronghold in Iraq where swimming was never for women. Even before the Islamic State group made Mosul the heart of its self-proclaimed caliphate in Iraq in 2014, conservatism and tradition in the ancient mercantile city meant its pools were only for men.

But a year after Iraqi forces reclaimed the city from the jihadists, coach Omar Ibrahim and his team of 12 young girls are changing that. At 10-years-old, Malak Hisham had previously only ever seen women swimming on TV or the internet. Today, she splashes about with her teammates, all of whom are determined to train hard and win big.

“Swimming’s good for the body and the mind,” says Malak, who’s been at the outdoor pool in eastern Mosul’s posh Al-Muthanna neighborhood every day since the summer holidays began. Owner Ibrahim Saleh says the complex stayed open throughout IS’s crushing three-year rule. But it was only open for men, and among them, only those dressed according to the jihadists’ strict codes.

Even before the Islamic State group made Mosul the heart of its self-proclaimed caliphate in Iraq in 2014, conservatism and tradition in the ancient mercantile city meant its pools were only for men.

The annual rent of $4,000 (3,500 euros) usually paid to the municipality went to IS coffers, Saleh says, to avoid violent punishment. But after a bloody nine-month push to retake the city, relative calm has brought a new crowd to Mosul’s pools.

In her black jumpsuit, pastel pink swimming cap and tightly strapped goggles, Rama dives head first into the 25-by-10 metre pool. With the backing of her parents and her coach, she hopes to achieve her “dreams of becoming a famous swimmer”, just like her father and grandfather before her, she tells AFP.

From the edge of the pool, Ibrahim shouts instructions to his team. “(We train) every day for two hours, with some warm-ups before practising breaststroke, crawl and backstroke,” the 40-year-old trainer says. Groups of boys horse around in the complex’s other two pools, seemingly oblivious to the small dedicated team already dreaming of international competitions. To do that though, they’ll need help.

“We need the Ministry of Youth and Sports or any other competent authority to support us. We’re still the only team of this kind in the province”, says the coach, wearing a red bucket hat to shield himself from the scorching summer sun.

The Colors of Mosul

Malak hopes a few girls at the pool is part of a bigger change. She wants to see “all girls practise a sport, to raise the colours of Mosul”. Her father, Ahmed Hisham, himself a sports teacher, says he didn’t hesitate to register his daughter for swimming lessons.

But he knows many other families in the city might not be ready to take the plunge. Still, “they should encourage their daughters to practise a sport or any hobby that would be beneficial” to a generation that grew up under jihadist rule.

At 10-years-old, Malak Hisham had previously only ever seen women swimming on TV or the internet. Today, she splashes about with her teammates, all of whom are determined to train hard and win big.

Beyond the hurdles set by society, however, the team has a more pressing challenge. For the moment, Ibrahim has graciously lent them the use of his outdoor pool in Al-Muthanna, but in a few months, it will be unusable, as another one of northern Iraq’s often snowy winters sets in.

Read more: Iraqi farmers fight to save cattle from drought

“We have to find an indoor swimming pool, otherwise everything will have to stop,” says Rama, who is already worried about the prospect. The options are limited, as many of the city’s other pools were destroyed in the battle against IS.

Ten years ago, Mosul’s municipality launched a major project to equip the city with an Olympic-sized swimming pool. But that project, like many others in Iraq, stalled due to lack of cash. As efforts now ramp-up to rebuild, Rama and her team hope that pool will be included in the reconstruction plans — that way, they can train year-round.

Why Kangna Ranaut travels around in a vintage car?