Is a slowdown in the Chinese Economy sufficient to end the US-China Trade War? 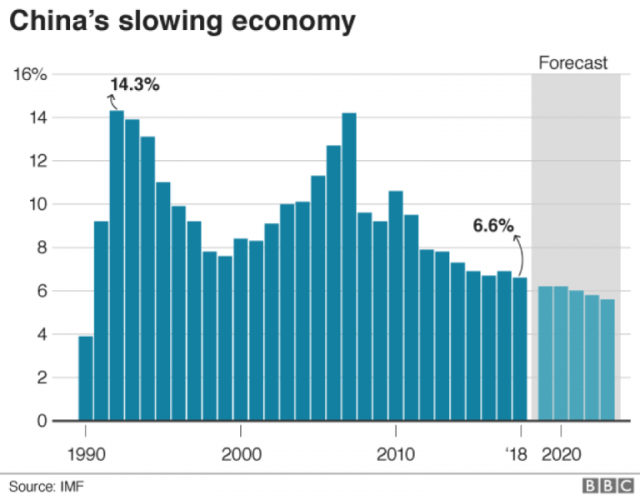 The World Economic Forum, held in the snow-packed Swiss town of Davos, contemplated various powerful questions for the future. Christine Lagarde, the head of the International Monetary Fund, shed light on the hazards of the ongoing US-China trade and its implications on global growth. She further commented that this trade war is very likely to expedite a “slowdown of the Chinese economy”.

While addressing her audience at the World Economic Forum, she said, “A slowdown of China is fine. It’s legitimate. But if the slowdown was fast, it would constitute a real issue,”. More recently, reports reveal that Indonesia is eager to reap billions of dollars in foreign investment for corporations that are planning to relocate their factories from China, primarily due to a “fallout of the US-China” trade war.

The Chinese Ministry of Commerce stated that the trade talks were “extensive and established a foundation for the resolution of each other’s concerns”.

Tom Lembong, the chairman of the Indonesia Investment Coordinating Board, shed light on this relocation in a television interview during his trip to Davos for the World Economic Forum. He said that countries such as Indonesia, Cambodia, Bangladesh and Vietnam has much to gain from factories relocating from China. However, the trade war can trigger “downturns in demand and confidence” because the two wrangling nations constitute “one-third of the world demand”.

On 7th January, an official US delegation met with a Chinese delegation in Beijing to begin trade negotiations, and the two sides came to an agreement on a 90-day truce, which will end on 1st March. The discussions revolved around “trade issues” that focused on trade negotiations, and “structural issues” which focused on protection of intellectual property, forceful technology transfers and non-tariff barriers.

Once the talks came to an end, the USTR announced China’s promise to invest in a “substantial amount of agricultural, energy, manufactured goods, and other products and services from the US. The announcement also highlighted that “several issues remain outstanding”.

The Chinese Ministry of Commerce stated that the trade talks were “extensive and established a foundation for the resolution of each other’s concerns”. Both sides have decided to remain closely in contact on the issue of trade wars, however, economists believe that this war is far from here, and has a much stronger political underlining as opposed to securing any economic goals.

The trade war can trigger “downturns in demand and confidence” because the two wrangling nations constitute “one-third of the world demand”.

Washington and Beijing became involved in a rapidly escalating and intensifying trade war that began in early 2018, and since then, the two countries have been imposing new tariffs on one another, which target billions of dollars’ worth of merchandise and manufactured goods that are integral to both economies.

President Donald Trump has never hesitated from expressing his condemnatory remarks on the trade imbalance between China and the US, and he termed this economic conflict as a “trade war”, which soon emerged as a US tactic of exerting pressure on China in attempts to undermine the trade deficit. In 2018, the trade deficit between US and China was at its highest in 10 years.

Read more: As US retreats, China touts its trade deal wares to Asia

Since assuming the US Presidential Office in 2016, President Trump has adopted a critical stance towards the Chinese trading practices. Last year in July, he materialized his threats of imposing extensive tariffs on China in response to it’s allegedly “unfair trade practices”.

Economists believe that this war is far from here, and has a much stronger political underlining as opposed to securing any economic goals.

Until now, the US has imposed tariffs worth a staggering US$ 250 billion on Chinese merchandise and has threatened to impose further tariffs of US$ 267 billion. Meanwhile, China has responded by imposing tariffs on US merchandise worth US$ 110 billion, along with threats of imposing “qualitative measures against US businesses operating in China”.

For a long time, it appeared that neither US President nor Chinese President Xi Jinping were eager to call it quits, and the US-China trade issues erupted into a full-blown economic war. The Chinese Ministry of Commerce issued a warning that these tensions can even escalate into “the largest trade war in economic history to date”.

Recently, US and China have made efforts to bring an end to the trade war, and both agreed to a 90-day truce that will lead to further negotiations on trade. Until 1st March, it appears that the issue has been sealed with an economic ceasefire that has put an end to further tariff increases, for now.

Analysts have noted that in the wake of this US-China trade war, the Chinese government has come under pressure for the gradually slowed pace of economic growth, which is at its slowest in nearly 30 years. Economists believe that this slowed economic growth is urging China to come to terms with the US and submit to their trade concerns.

Since assuming the US Presidential Office in 2016, President Trump has adopted a critical stance towards the Chinese trading practices.

In an interview to a leading news publication, Louis Kuijs, the chief Asia economist at Oxford Economics in Hong Kong, notes that slowed economic growth has exerted pressure on China to “achieve a deal” or at least “secure a suspension on the US tariff hikes”. He further commented, “At the same time, the US side also seems to be under more pressure to de-escalate tension in terms of news on the economy and financial markets than a few months ago.”

Hendrik du Toit, the Chief Executive of Investec, made some interesting comments at the World Economic Forum in Davos during an interview to CNBC. He pointed out that the trade talks between China and US are not primarily about commerce, but in fact, a “new world order.” Du Toit is reported to have said, “The big uncertainty is the U.S.-China trade negotiation which is not really about trade, and it’s about a new world order.”

At the end of this month, Chinese Vice Premier Liu He will mark his first visit to Washington Dc to hold further negotiations on the trade talks. So far, there has been no significant progress on the major concerns that have escalated the dispute, including Chinese stance on intellectual property and its support for state-run corporations.

What are Chinese troops doing in Hong Kong?