Is Balochistan not part of Pakistan? Bilawal accuses Khan of changing CPEC route

PPP Chairman Bilawal Bhutto Zardari has accused the incumbent government of depriving the people of Balochistan of their share of benefits by diverting the route of CPEC and initiating the project from Lahore and Sindh. 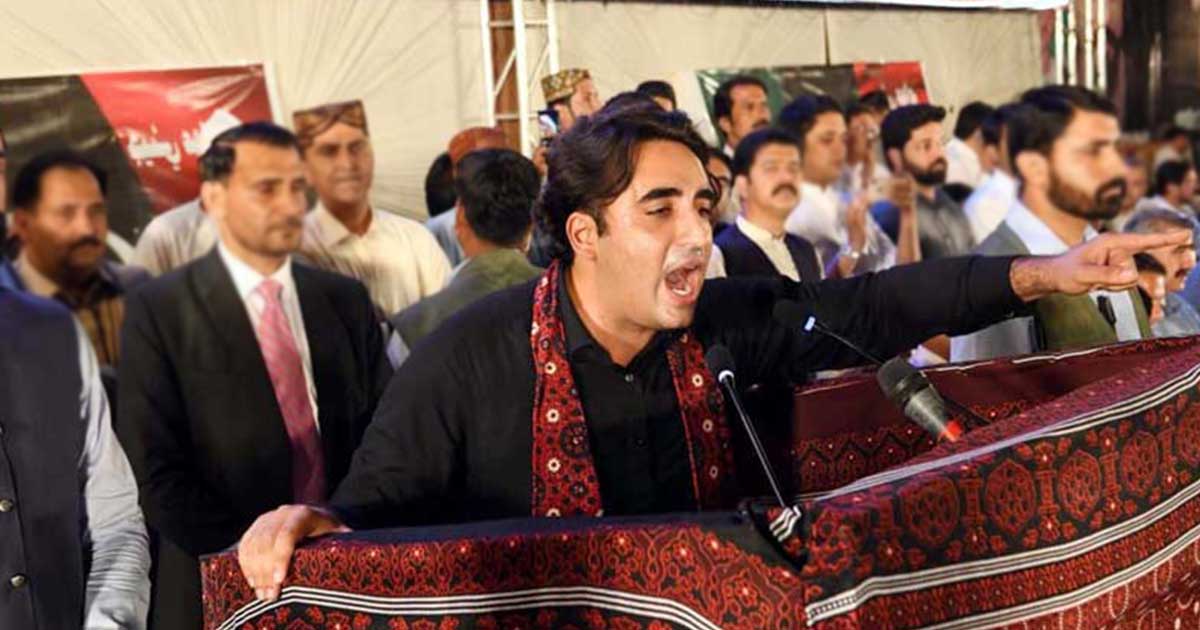 He claimed that the new route will deprive the Baloch people of their share of the advantages promised by the project.

Addressing a PPP worker’s rally in Quetta, Bilawal Bhutto Zardari said, “We introduced revolutionary projects for the people of Balochistan, including CPEC. Former President Asif Ali Zardari had the vision of introducing the route from the most downtrodden areas of the country, including Balochistan and FATA.”

“I regret that the route has been changed, and instead, of Balochistan, the project has begun from Lahore and Sindh.”

Bilawal said that the PPP wants the people of Balochistan to reap their share of benefits from CPEC, however, he lamented that the “incompetent and unqualified, puppet government” has failed in securing these benefits.

The PPP chairman claimed, “Only the PPP is competent, and remains the only party to have successfully delivered the benefits of a project to the residents of the area where the project is launched.” Bilawal cited the example of Thar and claimed that the Thar coal power project has allowed the women of Thar Desert to seek employment in a wide range of fields, as truck drivers and civil engineers.

Citing other achievements of the PPP in Sindh, Bilawal added, “The coal produced in Sindh is used in the power plants across Faisalabad.”

Bilawal observed that Balochistan is the most resourceful and naturally endowed province of Pakistan, and claimed that only the PPP can assure that its resources benefit its residents, the “people of Balochistan”.

Power being stolen from People

The PPP Chairman alleged, “We are not being ruled by our representatives, but the selected and their selectors.” Bilawal questioned that while the interviews of members of proscribed organizations and RAW agent Kulbhushan Jadhav can be aired, why is former President Asif Ali Zardari barred from sitting for a televised interview?

Bilawal Bhutto Zardari says people of Balochistan had been deprived from reaping the benefits of the China-Pakistan Economic Corridor (CPEC) https://t.co/IPZbSmlzru

Criticizing the incumbent government, Bilawal said, “Pakistan is the only country in the world where many people can go missing and the state is never at fault.” He alleged that the “selected prime minister” is not only “stealing” the resources that belong to the provinces, but is also burdening the people with his “incompetence.”

The PPP Chairman said, “He who had made promises of giving 5 million homes and 10 million jobs is now seen snatching job opportunities and roofs in the name of encroachment.” He accused the government of leading farmers towards “economic suicide” by depriving them of subsidies.

In a response to Bilawal’s tirade of accusations, Dr. Firdous Ashiq Awan, Special Assistant to the Prime Minister on Information, termed the PPP Chairman as an “underaged politician”. She observed that while Bilawal adores referring to Prime Minister Imran Khan as a puppet, he is blissfully “unaware of the number of puppets within his own party, whose strings are being pulled.”

Questioning the vision of Zulfiqar Ali Bhutto, as underscored by Bilawal in his address in Quetta, Dr. Firdous said that “If Bhutto continues to live, the poor people are dead.”

She said, “If Bhutto’s vision was indeed alive, these wealth worshipers would not be struggling against the law in the manner in which they are squirming from accountability.”

PTI wins majority in Senate despite major setback in Islamabad

Thanks to Nawaz, Pakistan is nuclear power: Maryam Nawaz