China, making a departure from its usual caution, has accused Britain of fuelling unrest in Hongkong. GVS analyses the background. 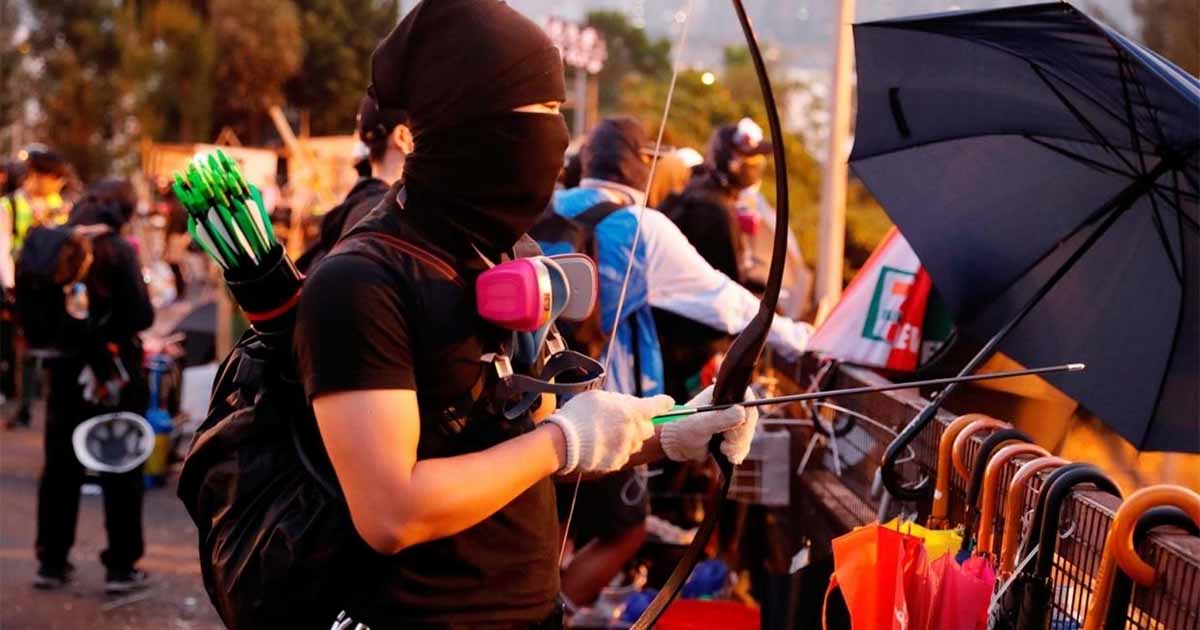 China on Friday condemned an incident in which Hong Kong’s justice secretary was jostled by masked demonstrators in London, and accused Britain of fueling ‘pro-democracy unrest’ in Special Administrative Region (SAR) of the country. China blames the western countries for supporting protesters under the cover of democracy and freedom of expression. However, prior to the justice secretary’s incident, China did not explicitly name the United States of America or Britain for backing the miscreants.

According to media reports, Teresa Cheng, Hong Kong’s most-celebrated Secretary for Justice, fell while being surrounded by protesters as she prepared to attend an event on Thursday night in London. She regained her feet moments later and was escorted away with no visible signs of injury in video footage of the incident.

But China called it an “appalling attack” and has demanded Britain to offer security protection to the Hong Kong minister. “If the British side does not change its wrong practices, and continues to add fuel to the fire, sow discord and instigate others, and make false countercharges, then it will bring calamity on itself,” foreign ministry spokesman Geng Shuang said at a regular press briefing.

Geng said that failing to act on “anti-China elements” in Hong Kong will not only cause trouble in the semi-autonomous territory but will also “cause serious interference and destruction to the international community including the United Kingdom.”

He called for Britain to “bring the culprits to justice, and safeguard the personal security and dignity of all Chinese personnel in the UK.”

Hong Kong was governed as a British Colony, from 1842 when China defeated in the First Opium War had ceded Hong Kong to Britain through the “Treaty of Nanking” in August 1842.

Chinese sources told GVS that Britain tried making radical changes in Hong Kong’s political system through the “Reform Package of 1994” when Chris Patten was the governor.

This British mandate was expanded on surrounding areas for the next 99 years, through the “New Territories Lease” in 1898. In 1997 Britain returned Hong Kong and surrounding areas back to China under an arrangement in which China agreed to continue Hong Kong’s British created a political system for next fifty years in what was then called, “One Country, two Systems”

What Do the Protestors Want?

The extradition bill which triggered the first protest was introduced in April and would have allowed for criminal suspects to be extradited to mainland China under certain circumstances.

Opponents claimed that it might expose the people of Hong Kong to unfair trials and violent treatment. They also argued that the bill could be used to target activists and journalists and would also give China greater influence over Hong Kong.

Thousands of people came out on the streets to protest and it was finally decided by leader Carrie Lam that the bill would be suspended.

After almost six months of protests, Hong Kong's government is being willfully blind to the chaos it's creating | Analysis by CNN's @jgriffiths https://t.co/L0dJedTQ2T pic.twitter.com/ZWnCFsYa3C

The protests, however, continued to grip the city as the people feared that the bill would be revived. Protestors called for the bill to be withdrawn completely. The bill was finally withdrawn in September but the protestors said that it was a little too late.

The protestors have five demands in total. One of their demands has been met and that was the withdrawal of the bill. The second demand that they have is for the protests to not be categorized as riots. They also demand amnesty for the arrested protestors and an independent inquiry into alleged police brutality. They also call for the implementation of complete universal suffrage.

The Hong Kong protests which began almost six months ago are now turning violent. The young college students are challenging the writ of the state, officials claim. Many of the troublemakers have also been arrested by the city police. Some analysts believe that “the protests themselves become more violent and disruptive” because of the government’s inability to adequately read out the underlying causes of this large-scale unrest.

However, others argue that the current wave of violence and use of extralegal means i.e. attacking police officials is demonstrative of the fact that these protesters are desperate to get the attention of the international media to compel the government to address their demands for so-called democratic reforms.

Young Hong Kongers, see the police as the enemy and attack them whenever they are found off guard. The police also brutalize the protestors in return. Unfortunately, Hong Kong protests have seen their first death and there might be more to come. A protester who fell several stories under suspicious circumstances died on Friday. Another is fighting for his life after being shot at close range by police on Monday. A man who was shouting Pro-Beijing slogans was also set on fire by the protestors and is now in a very critical condition.

It is worth noting that the Chinese government and state-run media have repeatedly blamed Western countries of hypocrisy in their attitude to violent protests in Spain, Chile, and Hong Kong over the past week

The western media is presenting the ongoing public demonstrations in Hong Kong as a reflection of ‘a powerful struggle for democracy’. The protests started after the proposed legislation of the 2019 Hong Kong extradition. The New York Times opines that these protesters are demanding democratic reforms in the region without any delay.

Hua Chunying, Foreign Ministry’s spokeswoman, recently said that the response by Western countries to the protests showed “democracy and human rights are only a pretentious cover for Western interference in Hong Kong affairs.”

Chinese officials maintain that western countries continue to pose challenges to China under the pretexts of democracy and human rights. “More and more people have come to realize that ‘human rights’, ‘democracy’ and ‘beautiful sights’ preached by some Western politicians are just illusory as a mirage in the desert,” she said.

In a commentary published in the state-run Beijing News, former Chinese diplomat Wang Zhen wrote: “the disastrous impact of a ‘chaotic Hong Kong’ has begun to influence the Western world.”

Read More: US must stop trying to ‘mess up’ Hong Kong: China

Chinese sources told GVS that Britain tried making radical changes in Hong Kong’s political system through the “Reform Package of 1994” when Chris Patten was the governor. Chinese believe that while Britain governed Hong Kong with an iron hand for 150 years from 1842 onwards, it suddenly created the controversy of expanded political rights from 1994 onwards to make things difficult for the post-British administration. Chinese believe that the pro-democracy movement of Hong Kong is being sponsored from abroad and sees the actions of western media and now the US House of Representatives in that light.

U.S pulls out of nuclear treaty with Russia