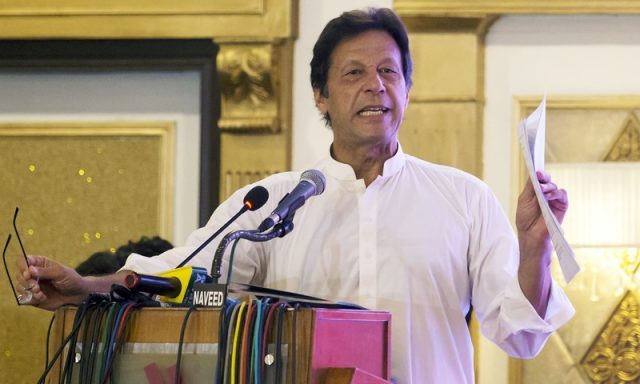 Pakistan Tehreek-i-Insaf (PTI) organized the ‘mother of all Jalsas’ at the historic Minar-i-Pakistan in Lahore with “dou nahi, aik Pakistan” being the main theme of the event. Imran Khan, chairman of the party, announced his 11-points agenda which he believes will bring a change Pakistan really needs at the moment.

Khan said that these 11-points “will make Pakistan one again (as he sees Pakistan having broken off into two – one for the rich and one for the poor) and uplift the poor sections of society”.

Imran Khan stressed on the need of education in Pakistan. He criticized the present government for failing to uplift the standards of education in the country. “No country has ever progressed without laying emphasis on educating its people,” Khan mentioned. Imran vowed to provide quality educations to every citizen without any discrimination.

Chairman PTI also said that his party will ensure the provision of basic health facilities to everyone by intruding an effective healthcare system in the country.  While talking about Shaukat Khanum hospital he said that two days ago an international commission examined the financial affairs of the hospital and subsequently awarded the hospital a “world-class” status.

He further mentioned that “75pc people are given free treatment and our doctors and nurses do not discriminate between patients.”

Imran Khan said that Pakistan was sinking as the rulers were borrowing more and more money. He ensured the nation that he will gather money from people and will repay it. “They [Pakistanis] are infinitely generous when they trust someone, when they know it [the money] won’t be stolen to make big mansions, when they know it will be used for their betterment,” said Khan expressing confidence in the people to stand with him and his mandate.

“We will reduce taxes on exports to compete with India for investment and business,” said Imran vowing that the party will provide investors with ease of doing business and good governance. “Pakistanis abroad are our greatest assets,” he said, adding that these measures will attract investment from Pakistanis living abroad.

Khan also claimed that tourism can help Pakistan earn more money and strengthen its economy. He said PTI will work towards developing hotels and amenities in serene locations.

Imran khan bashed the present government for ignoring farmers who, Khan believes, are the backbone of Pakistan’s economy. He ensured that whenever his party will come into power farmers’ grievances will be addressed immediately.

Imran Khan said that all provinces should have autonomy and rights to decide their matters. He also said that all provinces will be given their rights acknowledging the struggles faced by smaller provinces. “As soon as we come [into power] we will announce a South Punjab administrative division and address all issues in that region.” FATA, he said, will be merged into KPK.

Imran Khan said the party will ensure that every household in the country gets clean water.  He said that their party will launch tree plantation drives as the one which recently took place in KP, in which more than 1 billion trees were planted reportedly.

The PTI chief said he will give importance to educating young girls. For every 100 colleges for boys, we will establish 30 colleges for women, he added.

“Whatever I am today, it’s all because of my mother who made me a patriotic person and raised me to be a truthful person.” Everyone out of the three new schools in KP belongs to women. “We’ll strengthen them to access police help easily by making women police stations.”

Imran also talked about building women police stations and establishing a system to ensure property rights of women in Pakistan.

Imran Khan criticized the present government of Pakistan Muslim League-Nawaz (PML-N) for their failure to uplift the status of citizens in Pakistan. Deteriorating law and order situation, the weak economy and publicity-oriented projects of PML-N, argued Khan, have made it difficult for poor people to survive in Pakistan.

PML-N has traditionally been a party focusing on building motorways and now Metro and Orange line plans. These plans have given a visible converge to the party and its leaders. But as a matter of fact, it has been done on the cost of people’s lives; hospitals, police and education are widely ignored departments in Punjab where PML-N has been in power for last almost 10 years. Chief Justice of Pakistan has recently lamented over the poor state of education in the province.

Imran Khan, on the other hand, is focusing on real challenges: health, education and economy. If followed in letter and spirit what Chairman Imran Khan has just unveiled before the public will make Pakistan a “Naya Pakistan”. It is unfortunate to see people on floors in hospitals who are not even attending by any doctors, children out of school and young people unemployed. Pakistan needs education and health more than anything else. As CJP has pointed it out that it’s the fundamental right of people to have clean water and education.

Imran’s 11-points agenda is a hope to make Pakistan great and “Naya” but only if it is implemented in its true spirit.

CPEC: A Paucity of Planning by Pakistan

Elahi and PML-Q in Punjab?