Is Maryam Nawaz really not involved in Politics? 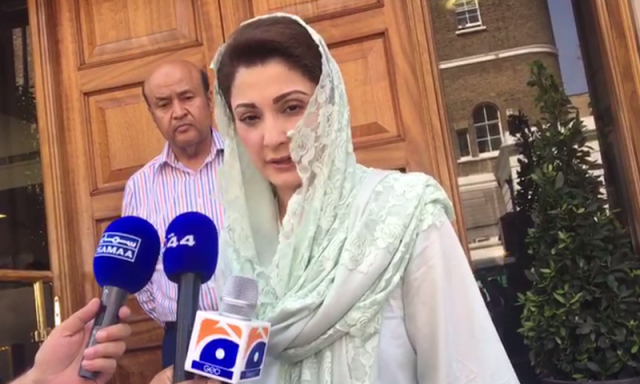 The ousted Prime Minister (PM) Nawaz Sharif expressed displeasure over his daughter’s appearance before an accountability court to record her statement in the Avenfield reference case. Nawaz, Maryam and Capt (retd) Safdar were identified as ‘the accused’ in the reference filed by the National Accountability Bureau (NAB).

Nawaz Sharif said that “those who dragged his daughter Maryam Nawaz to court will bear the consequences of their actions.”

He was talking to media outside the court when said that his daughter had ‘no connection’ with politics, but she was ‘knowingly’ being dragged into it.

“What could be worse than dragging her into court out of revenge and spite,” he angrily questioned. Nawaz also alleged that the family members who have ‘no connection’ to governmental affairs are being dragged through court. “In this ruthless game, you are even involving our daughters,” Nawaz said in a slightly emotional tone.

“Don’t choose a path which makes it impossible to return from,” Nawaz warned those who had brought him before the court.

Nawaz Sharif threatened his opponents of the same consequences if they did not stop. “Everyone will have to bear the consequence of this behavior,” Nawaz added.

After claiming Maryam’s innocence about politics, Nawaz also said that she had nothing to do with the business either. “Maryam has no connection to the era for which we are being punished. They are questioning her about Gulf Steel. She was only a year old at the time,” he said.

On his previous appearance before the accountability court, Nawaz claimed that questions regarding the London properties should be asked from his sons as he has no idea about their (his sons’) business. It is interesting to note that just like their sister, Hassan and Hussain Nawaz were minors in the 1990s when the property was acquired.

Nawaz was also bashing his opponents for making a joke of the country. “We have made ourselves a joke in the world,” Nawaz concluded.  He has repeatedly stated that his disqualification has damaged Pakistan’s image before the world.

Maryam Nawaz: a story of a housewife?

Nawaz’s talk presented his daughter as a common Pakistani housewife who has nothing to do with business or politics. Nawaz intentionally used these expressions and references to seek emotional support from the masses. In Pakistan, it is a general norm to respect women, and in particular, they are not dragged into the matters related to court or politics.

But, as a matter of fact, this trend is common in rural areas. In urban areas, however, women are educated, empowered and well-aware about their rights.

Maryam Nawaz is not an ordinary woman as she has been the chairperson of Prime Minister’s Youth Loan Program in 2014. A petition was filed by the Pakistan Tehreek-i-Insaf leader’s Zubair Niazi to determine her qualification for the post of chairperson. Justice Mansoor Ali even inquired as  under what terms and capacity was Maryam made the chairperson of the program? Later on, Maryam, who holds a M.A. (English Literature) and Ph.D. in Political Science, resigned from the post. Interestingly, Justice Shah was surprised to learn about the combination of Maryam’s degrees.

As a matter of fact, Maryam Nawaz actively participates in high level meetings held in Islamabad and Lahore. She frequently addresses public rallies along with her father. There is no reason to assume that Maryam is not involved in politics. She comments on political developments, present’s her party’s perspective and defends the government on streets and Twitter alike.

Moreover, Nawaz’s claim that his daughter was only one year old when the properties were acquired makes it an interesting point to ask Nawaz to comment on his sons’ age at that time.

What is Nawaz Sharif’s “Narrative”?