Is the Islamic military alliance already in shambles? 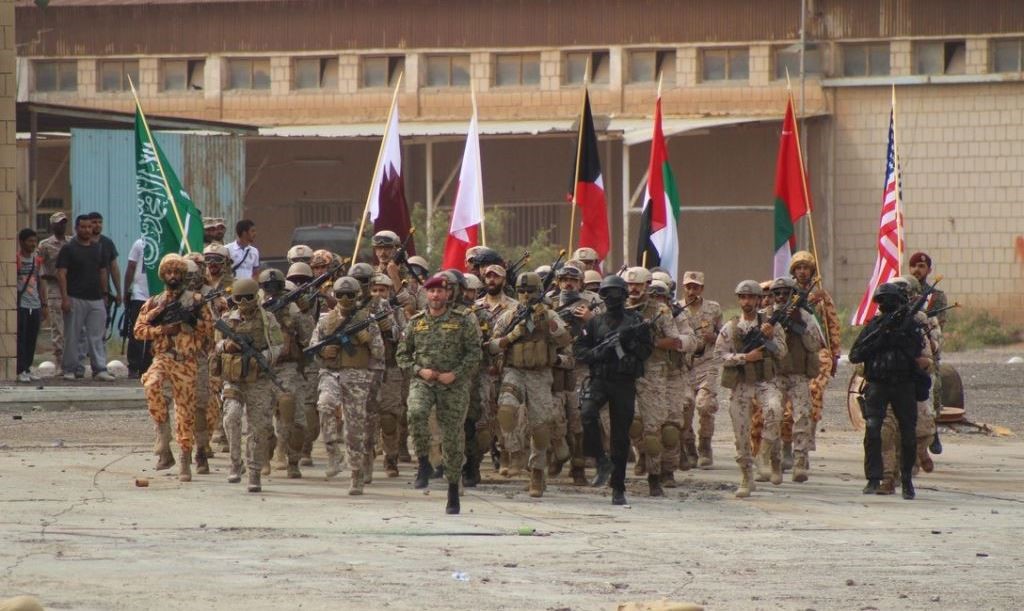 Political and geostrategic trajectories in the crisis-ridden Middle East are evolving so swiftly that US President Donald Trump chose the region for his first foreign visit. If Thucydides is to describe the contemporary Middle East, he would conclude; ‘the increase in Iranian sphere of influence has caused security dilemma among Sunni heartland’ whose resonance can be heard from Yemen to Lebanon and Iraq to Syria. This shift in power in favor of nationalist revisionist Iran has unnerved Sunni monarchies of the region, who have always viewed the regional geopolitical landscape through the narrow Shia-Sunni prism. Evidently, in Syria and Iraq, Saudis and their allies believe, Iran has crossed the Rubicon that must be reversed at all cost.

Historically, US role in the Middle East has been intrusive and manipulative in the region by forming alliances with the autocracies willing to work with the US for mutual enduring strategic interests.

The Middle East has fallen prey to its own resources that always attract external players to intervene into regional and domestic affairs of the regional countries. Ruling monarchs have allowed external intervention with the assumption that foreign actors would allow the former to prevail. Resultantly, ordinary people are now squashed between autocratic suppression on one hand and unabated anti-American and sectarian violence on the other.

Historically, US role in the Middle East has been intrusive and manipulative in the region by forming alliances with the autocracies willing to work with the US for mutual enduring strategic interests. But, in the aftermath of 9/11, the region started to descend into chaos and instability when President Bush junior intended to transform the region from outside by introducing a ‘freedom agenda’ based on his conviction that 9/11 perpetrators had come from the Middle East ruled by authoritarian regimes – publicly perceived as US puppets. This thinking toppled Saddam in Iraq and fetched elections in Palestinian authorities. This did bring unintended consequences also for the US in the form of a Shia government in Iraq and propellant rise pro-Iran Hamas in Gaza Strip.

Obama’s Jeffersonian/Wilsonian Middle Eastern policy, opposed to Bush, was overly optimistic based on the ‘euphoric change from within’; riding on the tides of Arab Spring, exploiting the democratic aspirations and awakening of marginalized masses to ensure the democratic transition. Unfortunately, it also led to the ouster of pro-US regimes in Tunisia and Egypt, bringing a democracy under the banner of Muslim Brotherhood in the latter which was unacceptable for US interests in the region.

Trump’s strategy for the Middle East

Donald Trump is fair to believe that his predecessors’ strategic follies have altered the power structure and hierarchy by removing barriers to Iranian expansionism, leading to the rise of Hamas, Hezbollah, Muslim Brotherhood, leaving Iran as the symbol of resistance against ‘US imperialism’; and most importantly, the erosion of nation-state system that propelled the ISIS from the hell.

A worthy point to ponder, Trump’s ‘retrenchment’ and Obama’s ‘disengagement’ are synonymous for the Middle Eastern region and China but with different modus operandi.

Having this muddled situation in the region, Trump does not seem to be paying much heed to the democratic fantasies and delusionary human rights temptations. He intends to revert to Cold War strategy – working with Sunni monarchies to ensure smooth oil supplies to the world, protecting the friends like Egypt, Saudi Arabia, and Israel, and reversing the gains of Iran and ISIS.

These short-term gains will allow Trump to ‘retrench’ from the region consistent with his vision of making America great again by putting his own house in order first and focusing on rising peer competitor China – poised to challenge US global leadership latter. A worthy point to ponder, Trump’s ‘retrenchment’ and Obama’s ‘disengagement’ are synonymous for the Middle Eastern region and China but with different modus operandi.

Nature abhors a vacuum, which is always filled by aspirants. Trump wants to pull out from what he called “the dumb wars of US adventurism” but without leaving a power vacuum for Russia or Iran. Also, because the anarchic system results in the words of Frederick the great “the permanent principle of rulers”, “to extend as far as their power permits”.  Since states are influenced maximizers, they elucidate their interests abroad when their relative power increases against weaker neighbors. This best explains the behavior of theocratic revisionist Iran and Putin’s assertive Russia in changing geostrategic alliance system.

Turkey had foreseen the developing situation, what Pakistanis could not smell, and sent a low-level delegation for representation in the summit.

The USA orders given and privilege taken, history reveals. Much cited and hotly debated Islamic Military Alliance, often called Islamic NATO enjoys the affirmative nods of Washington. This security arrangement is considered the only solution to many strategic dilemmas faced by the US and its regional allies for the moment. Islamic alliance aims to accomplish following objectives;

First, will serve to deny vacuum to Russia. History guides US decision makers, wherever they left a vacuum behind after pulling out boots, it has been filled by anti-US forces – state or non-state. Lately, US inability to act in Syria was exploited by Russia, Iran, and Hezbollah that resulted in reinforcement of Bashar regime and now both Russia and Iran are stakeholders even in post-Assad Syria.

Second, check and deter Iranian expanding sphere of influence, who has already crept into the Sunni heartland, according to Iran loathing Arabs.

Fourth, rejuvenate the vulnerable Saudi Arabia’s image and posture as the ideological head of the Sunni world and regional leader.

Finally, Keeping Turkey and Pakistan outside the Middle Eastern security complex, who, according to many Arabs, have the tendency and capability to lead Muslim world at the expense of Saudis. And it is evidenced by the treatment Pakistani premier received in Riyadh Summit where neo-Nasserist Sisi’s activism echoed the likely fate of General retired Raheel Shareef in the future to come. Turkey had foreseen the developing situation, what Pakistanis could not smell, and sent a low-level delegation for representation in the summit. Turkish rage is being reflected in Qatar/GCC crisis where it is siding with Qatar against GCC that makes an unfavorable equation for the latter having Iran and Turkey supporting the former.

Read more: Islamic Military Alliance: Has Raheel Sharif become a vassal for the…

Pakistani historical cult in the peninsula started to recede and Modi was welcomed in a bid to punish Pakistan for its defiance. This development facilitated Pakistan’s hasty inclusion in the alliance.

Pakistan’s inclusion in Islamic Military Alliance was nothing more than a damage control effort that was attracted by its refusal to commit troops to Saudi campaign in Yemen. Pakistani refusal to many quarters was a rational decision after having calculated the situation. But, for few, it was a decision solely based on sectarianism assumption, i.e. Shia/Sunni and Iran/Saudi. What it failed to comprehend was its effects on Indo-Pak zero-sum rivalry extended to Central Asia and the Middle East. Refusal to send Pakistani troops enraged Saudi Arabia and UAE and Pakistani diaspora started facing the ferocity of Arabs. Pakistani historical cult in the peninsula started to recede and Modi was welcomed in a bid to punish Pakistan for its defiance. This development facilitated Pakistan’s hasty inclusion in the alliance. Given the ominous dynamics in the region and Pakistani preoccupation vis-a-vis India, General Raheel’s acceptance as the commander of the military alliance was less an individual but more a state-sponsored initiative aimed at seeking leverage in a newfound context.

Now, amid Qatar crisis, the situation demands that Saudis behave sanely to avoid apparent defection of Qatar to the other camp. Otherwise, it will be perilous for the US and Saudi designs in the region and undermine the accumulative effects of Islamic military alliance.

Zahid Mehmood is PhD (IR) Candidate at National Defence University Islamabad, Pakistan, and a visiting faculty at NDU and Lecturer at National Officers Academy, Islamabad, Pakistan. The views expressed in this article are the author’s own and do not necessarily reflect Global Village Space’s editorial policy.

Pak Army to safeguard security and safety of its people: COAS

Imran Khan and Malala Yousafzai: The “World’s Most Popular”