Is US-Taliban dialogue a possibility? 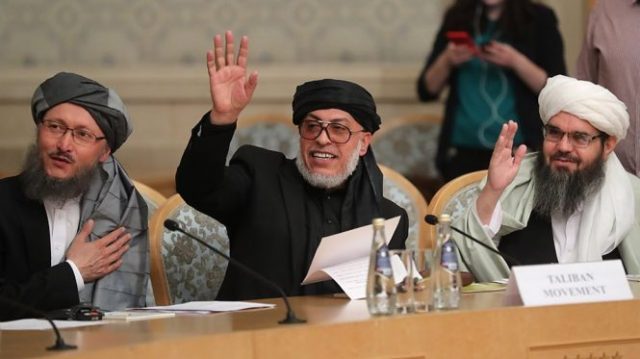 According to a Wall Street Journal report, a U.S envoy met with the Taliban representatives in Qatar to push forward the stagnant dialogue process. The Journal, citing a person familiar with the gathering, said U.S. Special Representative for Afghanistan Reconciliation Zalmay Khalilzad met with Taliban officials in Doha, the second time in four months that American officials have held face-to-face talks with Taliban representatives.

Though the agenda of the meeting was not revealed in the WSJ report, it is not quite difficult to infer that the core objective of Zalmay Khalizad’s 11-day visit, which includes a trip to Afghanistan, UAE, Qatar, and Saudi Arabia. He will be trying to break the ice which has been existent for a long time now.

The United States of America wants to utilize all the resources and influence at its disposal to make the Taliban come to terms for on record dialogue process.

The State Department neither confirmed nor denied the report of a meeting taking place. “We can’t confirm specific meetings or the content of diplomatic conversations,” said a State Department spokesperson. “Special Representative Khalilzad held a number of meetings with a wide range of stakeholders as part of his trip to explore how best to reach a negotiated settlement to the conflict in Afghanistan,” the spokesperson added.

Before the meeting in the discussion, there have been two separate rounds of negotiations between U.S state department director Alice Wells and the Taliban representatives in Qatar. There has not been any significant breakthrough so far which could be termed as the success of the U.S back-channel efforts to bring the Taliban on the negotiations table.

The last meeting between the two stakeholders took place in July 2018, after which the Taliban official representing the interest of the insurgent force in Doha, on the condition of anonymity, said that the dialogue process is moving in the right direction. Taliban themselves want this war to end, an interpretation of their move to write an open letter to the U.S public but they are never in favor of involving the incumbent Afghan government as the legitimate stakeholder.

On the other hand, U.S has also held the notion that the dialogue process must have the representation of the government. Resultantly it has been the biggest hurdle which has not been overcome so far. But given the desperation of the United States to engage Taliban in the backchannel, bipartite, and direct dialogues, it seems that Taliban are gradually gaining momentum on the negotiation table as well.

The demand is obviously unacceptable for Pakistan and with such dubious tactics, the process is only going to linger on.

In their open letter to the U.S public, Taliban had offered a direct dialogue with the U.S administration, notwithstanding the current process, principally, is just the ground setting for the real negotiations to kick start in an indefinite time. The striking difference between the previous two rounds which were spearheaded by Alice Wells and the current one is the scale which has significantly been broadened since July.

Previous two rounds could be termed as the focus group discussion of the representatives of two stakeholders who have been at war with each other for 17 years. The contemporary visit of U.S. Special Representative for Afghanistan Reconciliation Zalmay Khalilzad, alongside meeting with the Taliban officials in Qatar, involves a broad spectrum inclusion of all the entities who have had a historic relationship with Afghan Taliban since the Soviet Invasion i.e. UAE, Saudi Arabia, and Pakistan.

The United States of America wants to utilize all the resources and influence at its disposal to make the Taliban come to terms for on record dialogue process. The most damning development emerging from the last backchannel meet up of Afghan and the U.S officials were the demand to allow the U.S bases in Afghanistan to remain functional even after the foreign troops leave the country.

While on the surface, the United States has always labeled the war in Afghanistan as the source of dismantling Al-Qaeda, an objective which has long been achieved, especially after the assassination of Osama Bin Laden. There has always been a theory that real reason for US presence in this part of South Asia is to keep a check on Pakistan, especially on its nuclear arsenal.

With demands like these, U.S. is looking to maintain a long-term presence inside Afghanistan even if a peace deal is reached and strengthening the existent theory of hideous and below the surface objectives. The demand is obviously unacceptable for Pakistan and with such dubious tactics, the process is only going to linger on. The United States needs to set its priorities straight if it actually wants to get out of the black hole which is continuously engulfing its resources.

Is Trump’s letter a failure of his “New South Asia” policy?