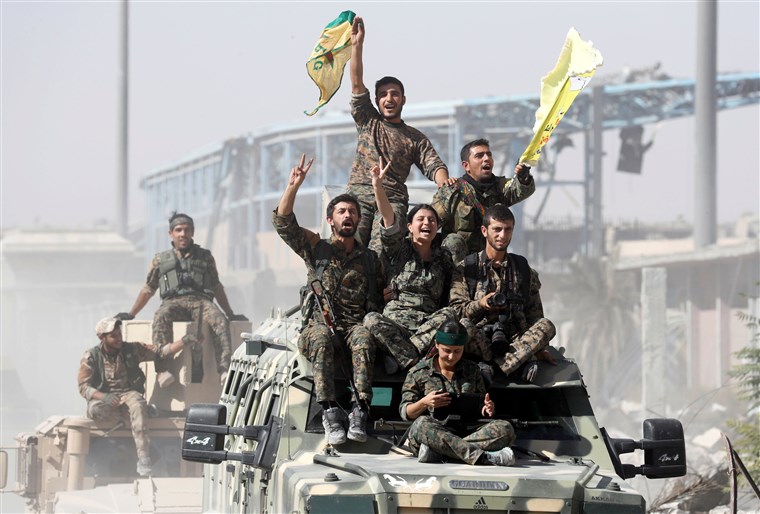 The year 2017 saw significant destruction to the Islamic State (IS), which lost almost all of its self-proclaimed “Caliphate” in Iraq and Syria, but experts warn the group is adapting and continues to be a threat.

Within hours of the start of the year, an Uzbek who described himself as a “Caliphate Soldier” opened fire at a nightclub in Istanbul in Turkey, murdering 39 New Year’s Eve revellers.

Through directly arming jihadists or by luring them with online propaganda, IS has committed or inspired dozens of deadly attacks, especially during the first half of the year, including in Pakistan, Iraq, Syria, Afghanistan, Egypt, Somalia and Great Britain.

Among them was suicide bomber Salman Abedi, a young British man of Libyan origin, who killed 22 people — including many children — by blowing up a homemade bomb at the exit of an Ariana Grande pop concert in Manchester on May 22.

Read more: Will the U.S. withdraw its troops from Syria after ISIS is…

Vehicle attacks, committed by jihadists inspired by IS orders, have brought bloodshed to the streets of Jerusalem, London, Stockholm, New York and Barcelona — and remain very difficult to prevent.

The attacks, which claimed several thousand lives overall, took place despite the almost complete dismantling of the organisation in Iraq and Syria, following a coordinated offensive launched in autumn 2016.

IS — also known by the Arabic acronym Daesh — had set up a base to manage its networks abroad, recruit soldiers, finance and coordinate their actions.

But its physical disappearance did not put an end to the attacks.”IS certainly is defeated militarily,” former anti-terrorist analyst, Yves Trotignon told AFP.

“While it has about 3,000 fighters in Syria and Iraq, which is a lot, it should be remembered that in 2009 the predecessor of the Islamic State of Iraq had been militarily defeated. But it took them only two and a half years to take advantage of the Syrian revolution and rise again from the ashes.”

The way in which the post-IS world is managed in the coming months and years will prove crucial in preventing the Sunni community from creating another jihadist movement claiming to defend its interests, according to experts.

And in the meantime, the long list of atrocities, attacks or failed attempts of 2017 proves that the global jihadist movement — including Al-Qaeda — remains resilient.

“The surgical operation in Iraq and Syria has been successful. But, as was the case in Afghanistan with Al-Qaeda, the cancer has regrown and there are jihadist territories elsewhere,” Trotignon said.

“IS is defeated, but the terrorist threat is far from disappearing. It is evolving in terms of the protagonists, modes of operation, and no calming factor is emerging.

The disengagement of the American forces has begun. On November 30, the Pentagon announced that 400 Marines deployed in Syria would return to the United States.

Although it was not explicitly claimed by IS, the massacre in late November of 305 Sufi worshipers — considered as heretics by the jihadists —

“”The subsidiaries of Daesh, primarily in Egypt, but also in Libya Yemen, Afghanistan and southeast Asia, remain very threatening,” according to Jean-Pierre Filiu, Professor at Sciences-Po in Paris.

“And jihadist propaganda, though less intense than in the days of the pseudo-caliphate, continues to maintain its mission and networks throughout the world.

Aleppo is devastated, but the internet is keeping alive some strong voices

Can Pakistan be coerced to recognize Israel down the road?