Sources in the Russian military and intelligence agencies say that the preparation of a full-scale offensive operation against Russia through Tajikistan and Uzbekistan is in the final phase. Citing data from closed communication channels with defense ministries of China, Pakistan, and Afghanistan, they say that Afghanistan is the cornerstone issue in this plan.

Similar messages have been received earlier, in particular, this was mentioned at a recent security conference held in the Uzbek capital Tashkent. Then the Tajik Foreign Minister Sirodzhiddin Aslov openly announced the activation of terrorists in the region:

“We see the activation of terrorist groups, their advancement to the northern regions of Afghanistan, especially in the territories bordering with Tajikistan, the increase in the number of ISIS supporters, and the participation of a certain number of citizens of the post-Soviet republics in the terrorist groups and movements present in Afghanistan … this causes our serious concern”.

IS is planning to expand its headcount to 5000 troops settling most of them in Mangals’ province. It is notable that two biggest US military bases in the country are situated near Nangarhar region controlled by IS and corrupt government.

According to Russian intelligence agencies, the number of IS terrorists operating in Afghanistan ranges from 2500 to 4000 people. This data has been confirmed by Ministry of Defense of China. PRC sources say that now there are at least 3800 militants operating in 160 mobile terrorist cells. They are concentrated in the province of Nangarhar on the border with Pakistan where IS has been increasing drug productions and trafficking, as well as creating infrastructure for training of militants and suicide bombers.

Read more:  US and Russian War Against ISIS in Middle East Threatens Turkish…

How it is Going to Happen 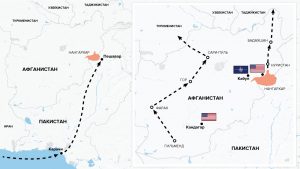 According to Russian military sources, terrorist are now retreating from Syria and Iraq by sea to the port of Karachi in Southern Pakistan. After that, they get to Peshawar near the Afghan border and settle in Nangarhar province. New HQ of IS in the region is situated in Achin district.

Starting from late 2017 terrorists managed to bring up to 500 militants from Syria and Iraq including several dozens of women. Sources say most of them are citizens of France, Sudan, Kazakhstan, Czech Republic, Uzbekistan etc.  The main objective of IS in Afghanistan is not only destabilizing the country but full-scale invasion to post-soviet Central Asian Republics: Turkmenistan, Uzbekistan, and Tajikistan in order to bring tension to Russian borders in the South.

Russian intelligence sources say there will two routes for IS offensive. One will lead to Tajikistan through Nuristan and Badakhshan provinces, another will go through Farakh, Ghor, Sari-Pul, and Faryab to Turkmenistan.

They are concentrated in the province of Nangarhar on the border with Pakistan where IS has been increasing drug productions and trafficking, as well as creating infrastructure for training of militants and suicide bombers.

The main person behind IS operations the governor of Nangarhar province Mohammad Gulab Mangal. He is using radicals’ infrastructure to enhance his influence in neighboring regions. Moreover, Mangal is well-known for taking part in IS financial operations. Sources say that any attempt of protest by local populations is violently suppressed by authorities, including punitive operations against populated areas.

Mangal has been connected to US special services for a long period of time. Wikipedia page about him says current Nangarhar governor took part in a war against Soviet troops back in 80-s. Right after US invasion in 2001, he was appointed the head of local authority. Western media portrays him as the effective and fair statesman, BBC even called Mangal a “New hope for Helmand” – a province he used to govern.

According to Afghan MoD, IS is planning to expand its headcount to 5000 troops settling most of them in Mangals’ province. It is notable that two biggest US military bases in the country are situated near Nangarhar region controlled by IS and corrupt government.

Andret Afasanev is head of political department at Tsargrad News. The views expressed in this article are author’s own and do not necessarily reflect the editorial policy of Global Village Space.

Can US & its Allies block China’s strong influence in Asia Pacific?

Couple sue son for not giving them grandchild

Indian civilisationalism: A potential next flashpoint?

US spends $150m in ASEAN to counter China

Clash between Russia and the USA over biological weapons in Central Asia?

Will China be able to defeat USA in a direct military conflict?