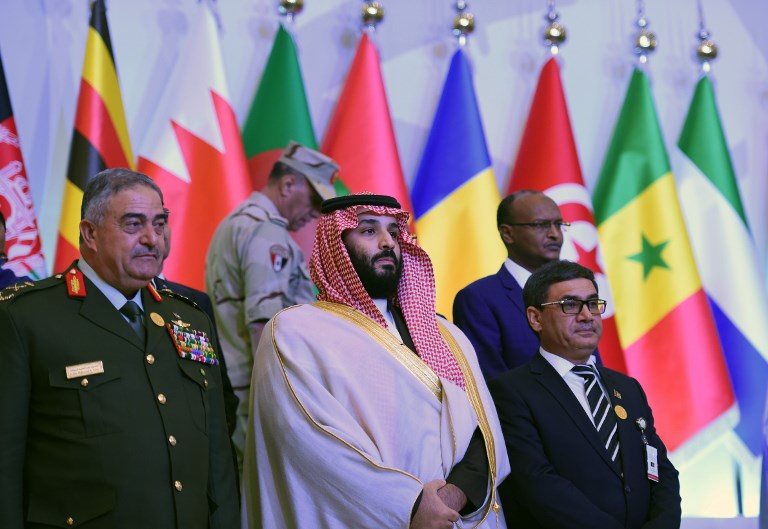 This past week, leaders of almost 50 ‘Islamic’ nations met, under the leadership of Donald Trump and the frail King Salman, as part of the first “Arab Islamic American Summit”, and added their collective voice to an absolutely ludicrous battle-cry that Iran is the manifestation of evil and terrorism in this world.

And just like that, a number of unprecedented ideological positions were scripted into the dark narrative of history.

One: For the first time in recent memory, the unspoken Shia-Sunni battle, which has waged at the heart of Islam for almost fourteen hundred years, has been institutionalized as ‘state policy’ throughout the Sunni world. What was earlier a whispered bias, adopted by a few Gulf States and felt by hapless individuals in Jhang, Quetta, Karachi, Kabul, Baghdad, and Riyadh, has now been given the institutional support and muscle (read; weapons) of all the Sunni States across the globe. Cloaked under the ostensible banner of ‘countering terrorism’, the two greatest harbingers of terrorist ideology (American imperialism and Saudi Wahabiism) got together and announced that someone (Iran) else was to blame for Islamic militancy. And the rest of the Muslim world – partly bribed through oil concessions and partly browbeaten through American muscle – signed up for this dastardly crusade. Bravo!

For the first time, America has formally picked a side in the fourteen-hundred-year-old sectarian war of Islam.

Two: For the first time (ever!) the entire Sunni world finds itself allied with America and Israel. Yes; let’s say that out loud, for the meaning to sink in. We are all, including Pakistan, on precisely the same page with the United States and Israel, in terms of opposing a fellow Muslim State (Iran), which has never ostensibly done anything to undermine or oppose Pakistan as a nation. So, even as people in Pakistan continue to burn the American and Israeli flags in random ‘Dafa-e-Islam’ rallies from time to time, let us remember that we are now partners. We share a common enemy and a common goal. That of opposing our neighboring Muslim state, which has never overtly threatened or opposed Pakistan. Take a bow (of servitude)!

Three: We have all agreed, as nation states, that Iranian boisterousness, and not Wahabi extremism (from which ISIS, Al-Qaeda, and Taliban were born), is the greatest threat to regional and religious peace. While condemning, in passing, the barbarianism of Sunni/Wahabi militant outfits (because we almost have to!), we have placed the entire brunt of Islamic militancy on Iran – a country that has not carried out any major acts of terrorism, either inside or outside its territorial boundaries. Great!

Four: For the first time, America has formally picked a side in the fourteen-hundred-year-old sectarian war of Islam. For the first time, the greatest (non-Islamic) military and economic superpower of our time have picked a side between Banu Ummayyah and Banu Hashim. Between those who martyred Hussain-Ibn-Ali (A.S.) and those who lament his martyrdom. However, what America does not know, and no one in the Muslim world has told her, is that they have not picked a fight with one nation or one military force. They have just entered the arena of anti-Shiaism. That, at the heart of it, Saudi Arabia, or the Middle East does not oppose Iran for its political ideology; they despise Iran because of a centuries-old ideological hatred. And we have a name for it: Bughz-e-Ali (A.S.).

Why is Iran called a ‘terrorist state”?

For almost five decades, Saudi Arabia has spread its regressive and intolerant version of Islam — originally practiced almost nowhere else — across the Muslim world.

If we were to pause and think for a moment, it would be hard to identify what Iran has done to the rest of the Muslim States, for it to deserve such unanimous contempt. Has it launched a war against any of us? Has it perpetrated violence in our cities? Has it threatened to ‘isolate’ us? Or propagated an ideology that kills innocent people in our street? No.

Has Saudi Arabia done any one or more of such things? Yes.

So, what then, is the reason for such unanimous opposition of Iran (in support of America and Israel)? What crime has Iran committed, any more than Saudi Arabia, to deem it to be a ‘terrorist State’? The answer is simple: Hub-e-Ali (A.S.).

On the other hand, let us consider the report card of Saudi Arabia – one of the leaders of this alliance. The facts are all too known, as emphatically commented upon by the prolific Fareed Zakaria: For almost five decades, Saudi Arabia has spread its regressive and intolerant version of Islam — originally practiced almost nowhere else — across the Muslim world. Osama bin Laden was Saudi. Fifteen out of nineteen 9/11 terrorists were Saudis.

A well-publicised leaked email from Hillary Clinton claims that, in recent years, the Saudi government, along with Qatar, has been “providing clandestine financial and logistic support to [the Islamic State] and other radical Sunni groups in the region.” Saudi nationals make up the second-largest of foreign fighters in the ISIS. Saudi Arabia is in a tacit alliance with al-Qaeda in Yemen. ISIS draws its beliefs from Saudi Arabia’s Wahhabi version of Islam. In fact, till such time that ISIS could write its own textbooks for schools within its territorial control, it adopted the Saudi curriculum as its own.

Iran, like all other Muslim States, supports its own version of violence in the Middle East. But it is wildly inaccurate to describe it as the source of terrorism.

Saudi money has now started making extremist inroads into Europe. A leaked German intelligence report shows that charities “closely connected with government offices” of Saudi Arabia, Qatar, and Kuwait are funding mosques and schools that propagate violence and extremism in the society. And the Deputy Crown Prince of Saudi Arabia, Muhammed Bin Salman, recently commented that he will fight the “Imam Mehdi”, who “the Iranians are waiting for”.

Does the mere geographical control over Mecca and Medina absolve the Saudi of all their actions?

Read more: US-Saudi arms deal: Is this setting the stage for a Saudi-Iranian war?

Now, to be clear, Iran, like all other Muslim States, supports its own version of violence in the Middle East. But it is wildly inaccurate to describe it as the source of terrorism. According to Leif Wenar of King’s College London, more than 94 percent of deaths caused by Islamic terrorism since 2001 were perpetrated by the Islamic State, al-Qaeda and other Sunni jihadists. Virtually none has been linked to Iran.

So, why do we support the Saudis (along with Americans and Israelis) in their opposition to Iran? And why are we part of the military armada, guided by Saudi ideology? We may not like the answer: oil, petrodollars, and bughz-e-Ali (A.S.).

Within this paradigm, it is irrelevant to lament the treatment meted out to Nawaz Sharif at this summit. Mr. Sharif got what he deserved. In any case, there are bigger issues at stake.

We cannot sit passively, in our comfortable inertia, and allow a handful of political rulers to cast our lot according to their depraved and corrupt ideologies.

The Holy Scriptures in each of the Abrahamic religions prophesize about the culminating battle between good and evil; the final coming; of the climactic drop-scene in the eternal conflict that rests at the heart of humankind’s redemption. A battle in which there are no bystanders and each of us will have to pick a side.

Are we living through the fulfillment of this prophecy? Maybe. But whether or not one believes in this eternal promise, at the very least the future of our nation, and that of our children, is intrinsically wedded to the outcome of this conflict.

We cannot sit passively, in our comfortable inertia, and allow a handful of political rulers to cast our lot according to their depraved and corrupt ideologies. Our individual consciences must find an expression that resonates in our national decisions.

For now, the State of Pakistan is part of a perverted congregation.

Saad Rasool is a lawyer based in Lahore. He has a Masters in Constitutional Law from Harvard Law School. He can be contacted at saad@post.harvard.edu. Follow him on Twitter. The views expressed in this article are the author’s own and do not necessarily reflect Global Village Space’s editorial policy. This piece was first published in The Nation.

Brazil’s presidential candidates at a glance