Islamophobia in France-from the past to the present

The author discusses how French leaders and their attitudes towards religion led to Islamophobia in France. According to the author, it has now become fashionable in contemporary French society to embrace Islamophobia. 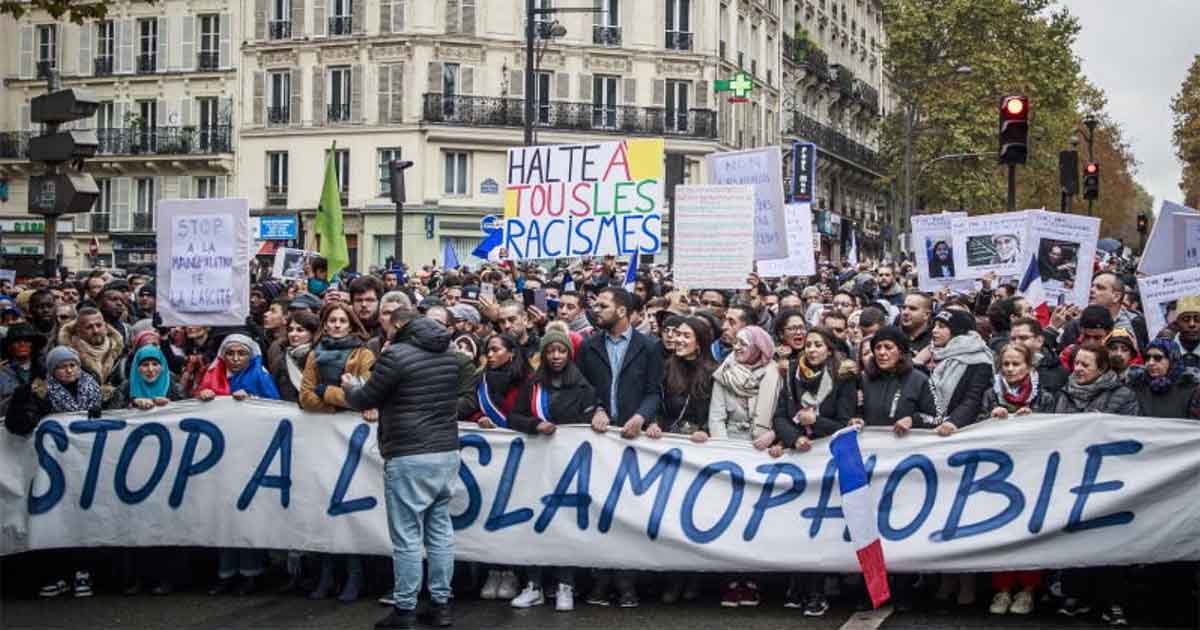 The way jejune Emmanuel Macron has dealt with the issue of repulsive pasquinade of the Prophet of Islam (PBUH), it’s a clear indication that there’s something intrinsically wrong with the French President’s mind, as Tayyip Erdogan rightly pointed out a few weeks ago.

Conversely, some political leaders are holding to ransom—peace, harmony, stability, security, economy, and wellbeing of 7.6 billion humans on the planet. The others are allegedly facilitating them in trading fear and uncertainty, and making huge gains in return.

The celebrated mid-nineteenth century French political economist—Frederic Bastiat once said, “The State is a great fiction through which everyone endeavors to live at the expense of everyone else”.

I shall here confine myself to the French leaders, only.

To begin with, Jacques Chirac who led France twice as President (1995-2007), was the last French politician who had an ideology, faith, and political will to keep harmony among his nation despite ethnic and socio-religious diversities.

From the start of the third millennium—2000 onwards—under the rubric of globalization some immoral trends began gathering momentum in contemporary societies, initially in the West but later worldwide.

The promoters of agnosticism, atheism, and homosexuality entered the political, social, financial, and academic institutions—the world over.

The global media houses offered their unqualified support to these what I regard as planned and organized movements against universal morality.

A number of individuals who were semi-literate, corrupt, and sexually perverted entered the first tier of international politics and eventually grabbed power in key countries.

The first interesting character that came to the forefront of French politics was Monsieur Nicholas Sarkozy who succeeded Chirac as President in May 2007, had a past opaqued by sexual scandals.

During the time of President Pompidou (1969-74) the teenager, Sarkozy only qualified to do his compulsory military service as a janitor. He rose from there and became head of the state after three decades.

No problem with that, it was his ‘affaire personnelle’—but Sarkozy had turned an agnostic atheist from being a Roman Catholic.

He endorsed republications of these caricatures by Charlie Hebdo magazine, from time to time. He supported and justified it as an ancient French tradition of satire. By this, President Sarkozy hurt the sentiments of 4 million French Muslims.

He failed to get re-elected, and last month, along with other outre-liberalists—Azibert and Herzog—was sentenced to three years in prison for corruption.

In May 2007, Sarkozy was succeeded by Francois Hollande. He followed his predecessor’s romantic disposition by having three love affairs—first with fellow politician Segolene Royal, then Valerie Trierweiler, and last (but not the least) with actress Julie Gayt. Like Sarkozy, Hollande also gave up his Catholic faith and became an atheist.

President Hollande also pursued Sarkozy’s liberal credo when in September 2012 Charlie Hebdo published, again, the abhorrent depiction of the Prophet of Islam (PBUH) with the reprehensible alibi—the ‘freedom of expression’.

The then French foreign minister Laurent Fabius criticized these caricatures and cautioned President Hollande—urging him to ask Charlie Hebdo to stop these offensive publications and maintain peace and tranquillity in France. Neither the French government nor Charlie Hebdo changed their course—the cartoons continued being published repeatedly.

Hollande was succeeded by Emmanuel Macron as President of the Fourth French Republic, in May 2017. Macron also had ‘Le passé sans fierte’.

It’s not in the scope of this article to examine his love life but he was sexually perverted even at the age of 15 when as a Baccalaureate student at La Providence High School, Amiens, he became a Gigolo to his 40-years old teacher—Brigitte Trogneux.

His father Dr Jean-Michel Macron, a Professor of Neurology, was totally averse to his teenage son having love affairs with a women older than his own mother. Dr Macron once purportedly warned his son to refrain from his nymphomaniac teacher—‘otherwise he would get him castrated and send to an opera house to train as a soprano.

He finally pulled his son out of La Providence and sent him to Paris to complete his college education while staying away from his paedophilic ‘sugar-momma’.

Like his predecessors—Sarkozy and Hollande—the gerontophilic Macron has also denounced his faith from Catholicism to agnostic atheism. He indulged in multiple love affairs and aggressively supported same-sex marriage as a legal social contract.

It is said that the French are inherently liberal and progressive. The religion, morality, and faith—not their problems. They are casual and naive towards the social and religious sensitivities of 100+ communities living in France.

Prophet of Islam (PBHU) and the eighteenth-century French enlightenment

Interestingly, Voltaire (1694-1778)—one of the three political sages of the pre-French Revolution era, besides Montesquieu and Rousseau—was an aggressive opponent of Prophet Mohammad (PBUH).

Like Winston Churchill—the British winner of the Nobel Prize for Literature (1953), Voltaire wrote extensively against Prophet Mohammad (PBHU), Islam, and Muslims. But in his later years, he repudiated his own outrageous claims against Islam and Prophet Mohammad (PBUH).

He also read the French translation of the Holy Quran by Andre du Ryer—L’Alcoran de Mahomet (1647), and produced his own essay on Prophet Mohammad (PBUH) and the Holy Quran—‘Treatise on Tolerance’.

Read more: The launch of the Quranic Encyclopedia; A step towards enrichment

Voltaire wrote another essay on Prophet Mohammad (PBUH)—‘Essay on the Manners of Nations’. In that, he argued that, “Muhammad (PBUH) was the most judicious political thinker—a wise founder of a wise religion”. He went on to say, “Islamic states observe tolerance and justice—whereas the Christian states lack these values”.

After the French Revolution—the Civil Codes that Napoleon Bonaparte introduced in 1804, under his Consulate—used several texts from the Holy Quran, Prophet Mohammad (PBUH) and Voltaire’s inferences from the Islamic thoughts.

Read more: Putin Quotes Holy Quran to Urge for Peace in Yemen: “You Became Brothers by his Favor”

Ironically, France’s recent leaders seem to have forgotten the lessons from the political philosophy of the French Age of Enlightenment. They are blatantly following the degenerative trends of modern politics. They appear to have reconciled with the ‘inevitable’ moral decadence.

Today, they follow and promote the coercive homosexual activism called the rights of LGBTs. They have signed to irreversible subscription to aggressive atheism.

It has become fashionable in contemporary French society to embrace Islamophobia. The French arms exports to the world’s repressive regimes are a popular trade norm. There’s no limit to freedom and liberalism—in ideas and actions.

They’re opposed to Rousseau’s definition of freedom—“Freedom is the power to choose our own chains”. It’s all about restraint and self-discipline—knowing our own boundaries and then stay within them. Freedom demands certain obligations towards others.

Some Muslim countries—Pakistan, Turkey, Malaysia, and Iran have suggested to boycott the French products. If it is done with fervor, solemnity, dedication and commitment—Monsieur Macron’s administration will be compelled to take tough measures against Charlie Hebdo and other publication houses continuously offending Muslims and their religious sentiments.

French annual exports are in excess of $550 billion—especially their aviation/aeronautical equipment, gas turbines, arms, pharmaceuticals, fashion industry, perfumeries & beauty goods, etc. Each year, more than $47 billion worth of these products go to rich Muslim states. If they are boycotted—the French economy will suffer beyond repair.

But here again—our belligerent neighbor, India, that has purchased Rafale aircraft and other aviation equipment in recent years, is endorsing President Macron’s ultra liberalism and unbridled freedom of speech.

How about liberalism and freedom of speech in Kashmir? By siding with the French leader against Prophet Mohammad (PBUH), Premier Modi’s vicious administration has not only squirmed the religious sentiments of 250 million Indian Muslims but has also violated the moral principles of their founding fathers—Gandhi and Nehru.

It is understandable that Mr Macron didn’t have ideally good schooling at La Providence—he missed social grooming and moral upbringing. Here is a good lesson for him, “The more freedom we enjoy, the greater the responsibility we bear—towards others as well as ourselves” (Oscar Arias—former President of Costa Rica).

The author is a London-based Analyst on South Asian and Middle Eastern Security. The views expressed in the article are the author’s own and do not necessarily reflect the editorial policy of Global Village Space.

Malaysian Airlines MH17 Mystery: Was Moscow behind it?

Assassination of Fakhrizadeh, a war against Iran’s intellectuals?