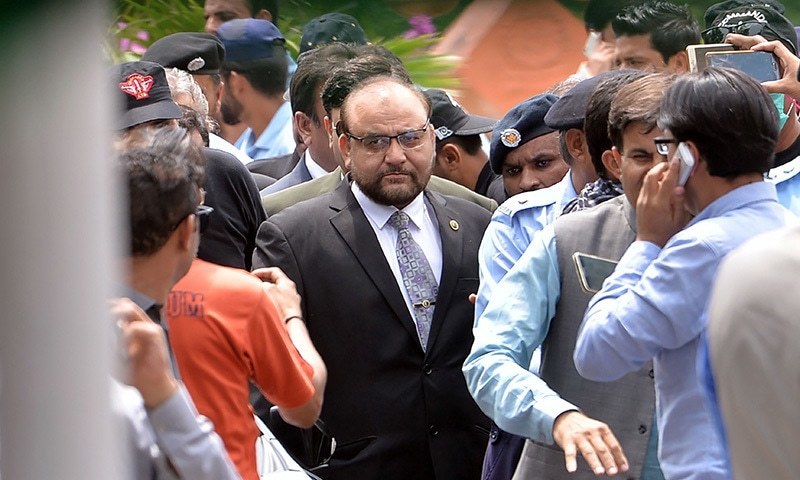 On Saturday, in a tweet by DG ISPR, the Army rejected the notification issued, earlier the same day, by the Prime Minister’s office regarding the “Dawn Leaks” controversy.  In a notification released by the Principal Secretary to the Prime Minister, the government proposed that the All Pakistan Newspaper Society (APNS) take disciplinary action against Dawn and its reporter, Cyril Almeida.

Tariq Fatemi and Rao Tehseen were already being discussed in the media as people who would be taking the rap for the leak, in this regard the Prime Minister’s notification revealed nothing new

The notification also informed of the removal of Rao Tehseen, Principal Information Officer of the Ministry of Information and withdrew the portfolio of Foreign Affairs from PM Special Assistant, Tariq Fatemi.

Notification on Dawn Leak is incomplete and not in line with recommendations by the Inquiry Board. Notification is rejected.

Dawn Leaks inquiry was set up over six months ago to investigate the leaked story published in the Dawn newspaper that the civilian leadership had rebuked the military leadership over their support of terrorists.

Social media buzz was negative straight after the PM notification was issued. With condemnation over why the APNS was being asked to discipline the newspaper as well as criticism of non-action by the PML-N over the leaks.

Godfather hides culprits of security breach & Panama. Is it PM House or a den of wanted criminals? #DawnLeaks

⁠⁠⁠Criminal conduct of Sharif govt with regard to national security has come out in the open. #DawnLeaks

The government is coming under increasing pressure to make public the full findings of the inquiry.

Tariq Fatemi and Rao Tehseen were already being discussed in the media as people who would be taking the rap for the leak, in this regard the Prime Minister’s notification revealed nothing new. The report as it stands seems not to have identified the real culprit who planted the story. In addition, there is also no direct charge placed on any political office holder. Pervaiz Rasheed, the Information Minister, had resigned last year, but the notification suggests that he has not been held responsible for anything. So far, the narrative taken by the government has been that the story should not have been allowed to be published but they have not indicated any interest in the identity of the source of the planted information. Nawaz government’s inability or lack of desire to reveal the real culprits, who leaked to Dawn in the first place, is infuriating politicians and the media, who suspect the government of hiding the facts.

Dawn Leaks inquiry was set up over six months ago to investigate the leaked story published in the Dawn newspaper that the civilian leadership had rebuked the military leadership over their support of terrorists. The meeting which was subject of this leak was held on October 3, 2016, in the aftermath of ‘alleged’ Indian surgical strikes.

The Dawn leaks was characterized as a national security breach by the Corp commander’s conference and an inquiry was set up under Justice (retd) Amir Raza and included representatives from the ISI and MI and other government functionaries.

The “Dawn Leaks” story has been subject to much distortion. Firstly, the government has yet to identify it as a national security breach (which will have legal repercussions) like the military establishment. The current notification implies that Dawn is to be punished yet the government has not detailed the charges against Dawn. Once it is established that “Dawn leaks” was indeed a national security breach the only responsibility that befalls on Dawn and Cyril Almeida is to reveal the identity of the perpetrator. As evident by precedents set in leading democracies like the USA, where national security is concerned a journalist must to reveal the identity of the source otherwise face the consequences.

A case in point was when the New York Times correspondent, Judith Miller, had to spend 85 days in jail in 2005 for contempt of court for refusing to testify and revealing the name of the person who told her the name of the CIA officer whose name subsequently had been revealed in an article and endangered her life. She was finally released from prison when she gave the name of the official source, Scooter Libby, who was Chief of staff to the Vice President of America.

The situation is moving towards a civil military clash over the definition of what is considered a national security breach and the required actions with government over pressure from recent events from Panama, to Jindal and now Dawn Leaks.

A hashtag has started #RemoveDGISPR is being condemned and, at the same time being alleged as initiated by PML-N’s media cell.

Previous articleBeware, Pakistani Lawyers are not to be taken lightly!
Next articleWhy DG ISPR’s Tweet saves the Army?

16 September 2021
Previous articleBeware, Pakistani Lawyers are not to be taken lightly!
Next articleWhy DG ISPR’s Tweet saves the Army?