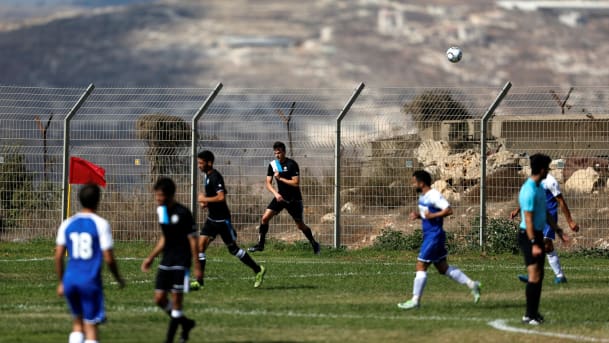 The perennial dispute between Israel and Palestine has put world soccer body FIFA in a bind. With FIFA groping on how to deal with Israeli West Bank settlement teams playing in Israeli leagues in violation of the soccer body’s rules, FIFA seems doomed if it does and doomed if it doesn’t.

A draft report by a FIFA committee headed by veteran anti-apartheid activist and former FIFA presidential candidate Tokyo Sexwale offers the soccer body’s governing council and congress that meet in Bahrain this week three imperfect options: allow the status quo to continue, give Israel six months to rectify the situation, or continue talks between the Israeli and Palestinian soccer federations.

Israel successfully lobbied to ensure that the committee’s recommendations would not include suspending Israeli membership.

The report, an effort to head off yet another attempt by the Palestine Football Association (PFA) to persuade the FIFA congress to suspend six West Bank teams, if not Israeli membership, is itself a reflection of the Israeli-Palestinian battle. Israel successfully lobbied to ensure that the committee’s recommendations would not include suspending Israeli membership.

Caught in a Catch-22, FIFA has yet to formally put the issue on either the agenda of its May 9 governing council meeting or May 11 congress in Bahrain. Mr. Sexwale’s committee meets, hours before the council convenes after which FIFA may as yet put Palestine formally on the agenda.

The dispute over the settlement teams constitutes a litmus test of FIFA’s newly found commitment to human rights at a time it is trying to project itself as a reformed organization that is putting behind it, the massive corruption scandals that have enveloped it for the past six years.

Provoking the ire of the Trump administration is not something FIFA would likely want to do after the US Department of Justice recently indicted Richard Lia, the latest of a host of FIFA officials to be charged in the United States on corruption-related offenses.

Yet, those scandals are FIFA’s Achilles Heel. Any decision that FIFA would take that explicitly or implicitly condemns Israeli settlement policy towards the occupied West Bank could put it at odds with the Trump administration, a stark supporter of Israel that believes that it can move the Israeli-Palestinian dispute towards a resolution where others have failed.

Read more: Will the state of Palestine be Obama’s legacy?

Provoking the ire of the Trump administration is not something FIFA would likely want to do after the US Department of Justice recently indicted Richard Lia, the latest of a host of FIFA officials to be charged in the United States on corruption-related offenses. The indictment demonstrated that the Trump administration has every intent to take forward the FIFA cases, initiated under the Obama administration, and, in fact, is expanding their scope.

Doing nothing could prompt the FIFA congress to move on a long-standing Palestinian demand that the soccer body suspend six Israeli settlement soccer teams at the core of the dispute.

Doing nothing could prompt the FIFA congress to move on a long-standing Palestinian demand that the soccer body suspend six Israeli settlement soccer teams at the core of the dispute. That would amount to FIFA acknowledging international law that views Israeli settlements in occupied territory as illegal and put it at odds with the Trump administration. The same is true for giving Israel six months to mend its ways.

In his report, Mr. Sexwale asserted that further talks that have dragged on for years without bringing the parties any closer to a resolution would be “futile.”

The stakes are high not just for FIFA but also for Israel and Palestine. Palestine like FIFA is walking a tightrope. Palestine will not want to upset the Trump administration less than two weeks after President Mahmoud Abbas on a visit to Washington endorsed President Donald J. Trump’s peace-making efforts and in advance of the president’s visit later this month to the Middle East.

The stakes are high not just for FIFA but also for Israel and Palestine. Palestine like FIFA is walking a tightrope.

At the same time, Mr. Abbas cannot be seen to be endorsing or closing his eyes to violations of FIFA rules against the backdrop of a hard-line Israeli government that has stepped up its campaign to portray the Palestinian Authority as supporting terrorism.

That campaign effects not only Mr. Abbas but also Palestine Football Association (PFA) president Jibril Rajoub, a former security chief who spent 17 years in prison and hopes to succeed Mr. Abbas as president.

Kick terrorism out of football

Pro-Israeli groups, including the Israel Institute for Strategic Studies, headed by Shabtai Shavit, a former head of Mossad, the Israeli intelligence service, has launched a campaign under the motto, Kick Terrorism Out of Football.

The campaign is part of a key Israeli foreign policy goal to counter a growing Boycott, Divestment, and Sanctions (BDS) movement that seeks to pressure Israel to withdraw from occupied territory. Israel sees the movement as a major threat to its international and moral standing.

The Israeli effort has prompted the government to redefine the concept of a homeland for the Jews as a homeland for those that stand by it uncritically. The government has barred Jewish supporters from entering Israel; persuaded Americans for Peace Now, a Jewish group critical of Israel that does not endorse BDS not to take the risk of bringing groups to Israel; and led to the expulsion on technical grounds of a Dutch foreign correspondent

Derk Walters of NRC Handelsblad was refused accreditation in part because of his reference to Palestinians with Israeli citizenship as Palestinian rather than Arab Israelis. Israel uses the phrase Arab to camouflage the Palestinian identity of approximately 20 percent of its population.

In a letter to FIFA, the ‘Kick Terrorism out of Football’ campaign accused Mr. Rajoub of having exploited “football for the promotion of terrorism” for the past 15 years. The campaign charged that Mr. Jibril by naming tournaments in honor of Palestinians who had committed acts of violence against Israel dating back to the 1972 Munich Olympic Games had violated FIFA rules and encouraged political violence. It demanded that Mr. Rajoub is barred.

The Israeli view was echoed in a recent op-ed in The Washington Post, in which novelist and New York University law fellow Thane Rosenbaum argued that the Palestine Authority continued to endorse violence by supporting the families of Palestinians who had died in violent acts against Israel.

The Israeli campaign against Mr. Rajoub as well as the Palestine Authority is designed not only to counter BDS but to refocus the debate on Palestinian violence at a time that criticism of Israeli settlement policy is mounting in the international community and Mr. Trump gears up for a renewed peace effort.

FIFA is the first international forum since the United Nations Security Council condemnation of Israeli settlement policy in December in which the Israeli campaign is playing out. With the backing of the Trump administration, Israel has greater flexibility than either Palestine or FIFA.

The significance of the Israeli-Palestinian battle being fought out on the soccer pitch goes beyond the intricacies of Middle Eastern politics. It demonstrates the knots in which international sports ties itself by continuously upholding the fiction that sports and politics are separate. The battle in FIFA is all about politics and not about soccer.

Previous articleFocusing on ISIS: Are we losing sight of a bigger enemy in Afghanistan?
Next articleYummy Mango Lassi

17 September 2021
Previous articleFocusing on ISIS: Are we losing sight of a bigger enemy in Afghanistan?
Next articleYummy Mango Lassi