Istanbul Summit on Syria was a success but caveats remain 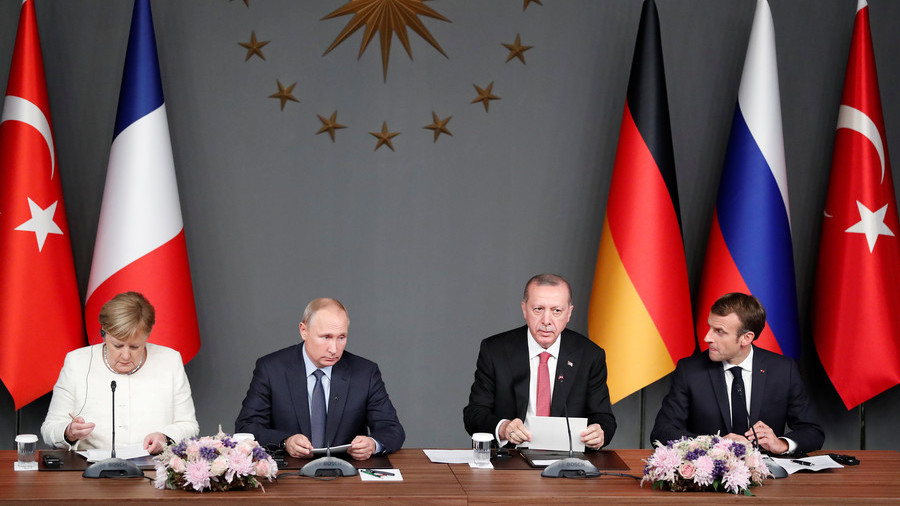 The four-nation Turkey-Russia-Germany-France summit on Syria on October 27 in Istanbul had an impressive outcome. All participants – each with own interests – has some ‘takeaway’ from the summit, which itself is a measure of the success of the event. This is also important because the participants now have a reason to work together.

Such an outcome can be interpreted in the following ways. First and foremost, a major regional conflict impacting international security was addressed without US participation. A sign of our times? Second, participants didn’t quarrel over President Bashar Al-Assad’s “fate”. The debate becomes pedantic today in terms of ground realities. The Syrian nation should decide on its future. That’s also been Assad’s demand.

Third, some serious thought has been given to the journey towards a Syrian settlement – ceasefire, drafting of new constitution followed by elections under UN supervision. Four, the participants snubbed the US-Israeli plan to balkanize Syria into “spheres of influence” and have also squashed the Israeli dreams of getting international legitimacy for its illegal occupation of Golan Heights as part of any settlement.

Trump is eternally grateful to Erdogan to refrain from spilling the beans on the Khashoggi affair and for helping him finesse a major crisis for his presidency on the foreign-policy front.

Five, Germany and France have become amenable to the Russian demand pressing the urgency for rendering humanitarian aid to Syria and help in reconstruction. (US made this conditional on Assad’s removal.) We’ll have to see how it pans out, but the summit also stressed the importance of return of Syrian refugees (which is a key issue for European countries.)

Six, the participants recognized that the remaining terrorists in Syria must be destroyed – although, significantly, they also supported the Idlib ceasefire deal brokered by Turkey and Russia.

The bottom line is that it is the post-war Syrian order that is under discussion now. However, it must be understood as well that the proxy war is not ending but is rather morphing into the diplomatic war that lies ahead, which of course will be keenly fought, given the divergent interests of the foreign protagonists.

Generally speaking, Russia and Turkey are in command as of now. Their own equations are good but there are grey areas, too. The importance of close coordination between Russia and Turkey cannot but be stressed. Iran cannot be happy that it has been excluded from the Istanbul summit. But it may prove an underestimation that Iran is in no position to assert its legitimate interests. The close consultations between Russia and Iran – not only regarding Syria – are of course the mitigating factor here.

Syria into “spheres of influence” and have also squashed the Israeli dreams of getting international legitimacy for its illegal occupation of Golan Heights as part of any settlement.

Similarly, “post-Khashoggi” Saudi attitude to Syria remains the “known unknown”. The US is in a position to blackmail Saudi Arabia to continue to bankroll its military presence in Syria, but Saudis cannot be having their heart in the overreach to project power abroad. Something has fundamentally changed – Saudis are not used to their prestige being dragged in the mud as in this past month and the traumatic experience cannot but have a sobering effect.

Besides, Saudis dare not cross swords with Turkey on the latter’s Syrian playpen. Above all, Saudis would not want to undermine Russian efforts to stabilize Syria, since Moscow’s goodwill and cooperation is extremely vital for Riyadh in the coming period, now that the raison d’etre of Riyadh’s “Look East” is beyond doubt.

Basically, France and Germany are lightweights in Syria. They had a limited agenda at the Istanbul summit. Russia must know fully well that in the final analysis, US involvement is crucial. It is entirely conceivable that at the forthcoming Russian-American summit in Paris on November 11, Syria will be a major topic of discussion.

The US policy in Syria is at a crossroad and will hinge greatly on the standing of President Trump in the aftermath of the November 6 mid-term elections in the US. Clearly, this was far from a situation of three major allies of the US staging a mutiny on the NATO ship. Germany and France would have consulted Washington most certainly ahead of the Istanbul summit (which has been in the making for months.)

The US is in a position to blackmail Saudi Arabia to continue to bankroll its military presence in Syria, but Saudis cannot be having their heart in the overreach to project power abroad.

The big question is how the Turkish-American relations evolve. The Khashoggi affair has brought about certain US-Turkey “proximity”. Ironically, the Deep State in America and Trump are on the same page here – rediscovering the vital importance of Turkey for the US regional strategies.

The spokesmen of the Deep State used to defame Turkish President Recep Erdogan for being “Islamist” and “authoritarian” and so on and probably even tried to overthrow him in the failed coup of 2016, but today, they laud him for espousing Islamic democracy as the panacea for the region.

Erdogan, in turn – or at least a part of him – had always hankered for recognition by the West when he sought Turkey’s historic leadership role in the Middle East and uniqueness to act as a bridge between the West and the region. Equally, Trump is eternally grateful to Erdogan to refrain from spilling the beans on the Khashoggi affair and for helping him finesse a major crisis for his presidency on the foreign-policy front.

Suffice to say, this “transition” in the US-Turkey tough love can profoundly affect the geopolitics of the Middle East – provided of course Washington plays its cards carefully in regard of Erdogan’s wish list on a host of pending issues, including some of great sensitivity. Syria is somewhere at the top of Erdogan’s priorities. Howsoever unpalatable it may appear, Erdogan will expect the Americans to throw their Syrian Kurdish allies under the bus.

Yesterday, Turkish army bombarded Kurdish positions east of Euphrates. Now, how Turkish policies play out in Syria is difficult to predict, since the variables are too many. A US-Turkey rapprochement is hard to reach. But then, Turks and Americans are also old allies and they have a way of knocking their heads together and start working together again.

The most powerful man in the world | Vladimir Putin