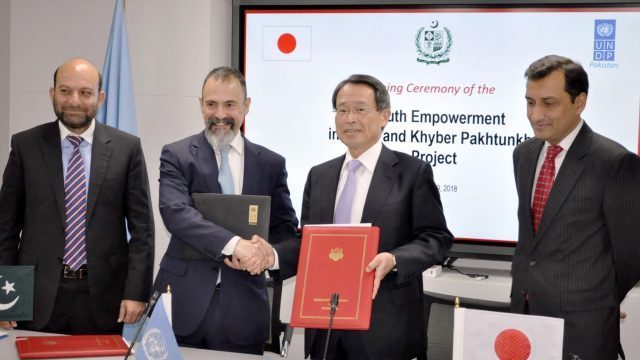 On February 19, 2018, Japan’s government and the United Nations Development Program (UNDP) have signed an agreement to launch a $3.9 million initiative with the objective to empower above 20,000 youth in Sindh and Khyber-Pakhtunkhwa. This resourcefulness would help in improving employment avenues and social cohesion by leading to positive interactions amongst youngsters of underprivileged communities.

UNDP Pakistan Country Director Ignacio Artaza explained, “The youth represent the future of Pakistan. The growing population of youth in Pakistan posed great challenges as almost 1.8 million jobs need to be created every year in order to employ these youths.” He also thanked the Japanese government for teaming up with UNDP for creating employment opportunities for Pakistani youngsters.

Gilgit-Baltistan and Sindh at 43 percent, Punjab at 31 percent and Azad Jammu and Kashmir at 25 percent. Pakistan must take sufficient measures to eradicate the vicious circle of poverty by empowering its youth giving them employment opportunities.

Japanese Ambassador Takashi Kurai stated that Pakistan has a large population of youth and it was tough for Pakistan to create sources of income for them. He added, “Japan will continue to support the youth so that they can take the lead in development of this country (Pakistan). Under this youth empowerment project, underprivileged people would get training in demand-driven skills to get jobs in local industries of the country.

Under this project, youth will be able to enhance their social interactions in those areas that currently have a limited scope for social and economic engagements by developing youth-friendly community. Pakistan’s current population is around 207,774,520 (excluding autonomous regions Azad Kashmir and Gilgit-Baltistan).

Around 31% of this population comprises of people aged between 15-29 years. Pakistan’s youth unemployment rate is 10.8%.  There is a dire need to provide skills and knowledge to youngsters to operate in growing competitive markets. Eventually, they can contribute to the sustainable development of the country.

Read more: 50 years on what does the future hold for PPP

Last year, on 22nd November 2017, the Ambassador of Japan to Pakistan, and the Country Director of (UNDP) in Pakistan, Ignacio Artaza, signed an agreement to provide $5.9 million over three years (2017–2020) to support the Election Commission of Pakistan (ECP), and to further strengthen its capacity to hold free and fair elections.

This initiative of $3.9 million to youth empowerment projects indicates Japan and UNDP‘s long-term commitment with Pakistan. This joint project of Japan’s government and UNDP also lines up with Pakistan’s Vision 2025 announced by its Federal Government. Vision 2025 is based on the requirements to embrace change and transformation and to create new opportunities based on Pakistan’s innate strengths.

The UNDP and Japan’s government have also collaborated earlier in projects in Pakistan including relief and rehabilitation work in the Federally Administered Tribal Areas and electoral reforms at the national level.

Pakistan has huge potential providing optimism that Pakistan could be a strong nation if its potentials have been explored and managed efficiently. Vision 2025 would contribute in the prosperity of the country.  Pakistan is the world’s 7th most populous country and with the cooperation of regional and extra-regional countries, the prospects of business activities, technological advancements and employment opportunities would increase immensely.

Poverty in rural Sindh is not a myth but it is a harsh reality because of Pakistan’s central government and its provincial government’s policies that kept these people in a state of deprivation. The UNDP and Japan’s government have also collaborated earlier in projects in Pakistan including relief and rehabilitation work in the Federally Administered Tribal Areas and electoral reforms at the national level.

Pakistan’s first ever official report on multidimensional poverty was launched on June 20, 2016 by the Ministry of Planning, Development and Reform, and was compiled with technical support from UNDP Pakistan and the Oxford Poverty and Human Development Initiative (OPHI), University of Oxford. It found that over two-thirds of people in FATA (73 percent) and Balochistan (71 percent) live in multidimensional poverty.

Poverty in Khyber Pakhtunkhwa stands at 49 percent, Gilgit-Baltistan and Sindh at 43 percent, Punjab at 31 percent and Azad Jammu and Kashmir at 25 percent. Pakistan must take sufficient measures to eradicate the vicious circle of poverty by empowering its youth giving them employment opportunities.

WHO report on Pakistan: Local transmission of coronavirus shooting up