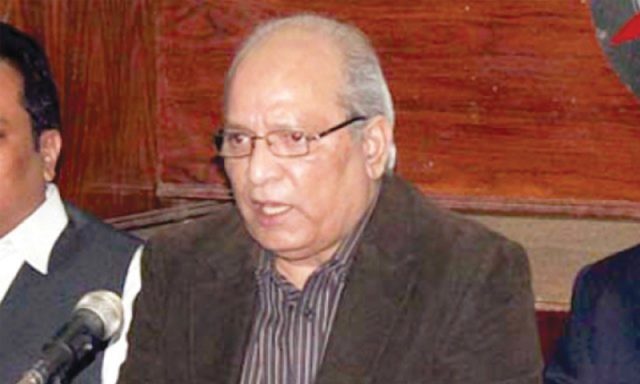 Pakistan Tehreek-i-Insaf (PTI) has implicitly indicated its coalition partner in Khyber Pakhtunkhwa Government to part away with it, over allegations from Jamaat-i-Islami (JI) Chief Sirajul Haq that PTI had voted for the chairmanship of Sadiq Sanjrani following an “order from the top.”

PTI has shown dismay and anger over the untimely attack from its coalition partner’s after spending 5-years in the government.

PTI’s information secretary Fawad Chaudhary lashed put at the JI, which has built on the narrative previously echoed from Pakistan Muslim League-Nawaz (PML-N) quarters. JI akin to PML-N obliquely held the military establishment responsible for alleged horse-trading/engineering for the coveted position of Chairmanship.

Prime Minister Abbasi has continued the tirade against forces which played a part in making the Senate elections controversial.

Fawad Chaudhary has shown surprise over JI’s still being part of the coalition government.Fawad bashed JI for playing the politics based on hypocrisy. As on one side, JI lamented Nawaz for accumulating huge wealth abroad from corruption money and filing petition against him in the apex court, but at the same time, when Nawaz was desperately trying to win the Senate elections to legislate according to his wish-list, Sirajul Haq became his support.

Though, JI believes that Fawad’s onslaught is not party’s line and coalitions cannot be broken based on emotional rants, but, what it fails to understand is it’s mindboggling & apparently directionless politics.

Read more:Rivalry between PML-N and PTI

JI has been against the PML-N’s corruption, but at the same time, it supported the same party in different constituencies to beat PTI, MQM, and PPP.When questioned over this hypocrisy, the party says it formulates a strategy based on constituency politics.

PML-N also attempted to build a narrative that PTI supported a PPP candidate and built a nexus with PPP’s chairman Asif Ali Zardari. Prime Minister Abbasi has continued the tirade against forces which played a part in making the Senate elections controversial.

PTI has shown dismay and anger over the untimely attack from its coalition partner’s after spending 5-years in the government.

But, a question which he fails to answer is why did not take up the recommendations from PTI to change the method of voting in Senate to make it open? In other words, no one can be more responsible for horse-trading than the incumbent government itself for allowing this controversial system of voting to go ahead. The reason being, it was itself a beneficiary of the same system. Hypothetically, had PML-N’s candidate won the Senate Chairmanship, what would be its stance against the whole process? Maybe different!

Read more:PML-N on a collision course with Election Commission Pakistan over new…

Apparently, JI has become increasingly irrelevant in the national politics, after facing many defeats and gaining the only handful of votes in any by-elections, where it participated JI is aware of its fate in KP, after PTI’s praiseworthy performance in the province.

Since, JI has already decided to revive Muttahida Majlis-i-Amal last year, and its intention was clear, then why would CM Khattak reveal this to his coalition partners turned foes?

No wonder, now, it opted to revive the Muttahida Majlis-i-Amal – a political alliance of five religious parties, having one election symbol, one flag, and one manifesto.

PTI managed to generate positive feedback over its welcome move to expel the 20-lawmakers for their alleged role in horse-trading. Political appraisal of this move can certainly benefit PTI.  It prompted JI to kick-start a storm by accusing PTI of voting for Senate Chairman on ‘order from the top’.

In hindsight, even if PTI had received the orders from the establishment, will it reveal it to Mr. Haq? Is it this naïve to share this with untrustworthy coalition partners who mostly supported PML-N in different by-elections against its allies?

Since, JI has already decided to revive Muttahida Majlis-i-Amal last year, and its intention was clear, then why would CM Khattak reveal this to his coalition partners turned foes?Though, it is too late now, with barely a month to pave way for new interim setup, if JI had such grievances it should have parted away with the government rather than enjoying all the perks in the government.

US Congress to ban Chinese products made by enslaved Muslims